The 2015 IZA Prize in Labor Economics goes to Jan Švejnar, the James T. Shotwell Professor of Global Political Economy and Director of the Center on Global Economic Governance at Columbia University’s School of International and Public Affairs, New York and a chairman of the Executive and Supervisory Committee of CERGE-EI in Prague. Czech economist was recognized for his work on economic issues in labor, development and the transition from socialist to market economies.

Professor Švejnar will receive the prize, awarded by the Bonn-based Institute for the Study of Labor (IZA) and widely regarded as the most prestigious science award in the world in the field of labor economics, for his major contributions to labor, development and comparative economics in general and the economics of transition from centrally planned to market economies in particular. 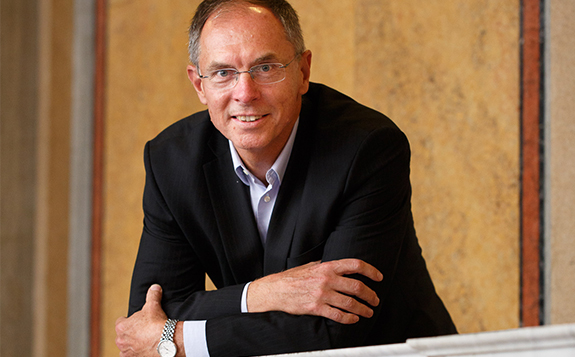 According to the IZA Prize Committee, Professor Švejnar’s research on the transition from socialist to market economies “has broadened our understanding of this process in a fundamental way.” Soon after the fall of the Iron Curtain, Švejnar provided an elaborated policy agenda for a successful transition from socialist to market economies. In articles published in the PlanEcon Report (1989) and Journal of Economic Perspectives (1991), he emphasized the need for micro adjustments to achieve macro stabilization in the transforming socialist economies.

Švejnar’s policy proposal emphasized the importance of a functioning legal framework to guide economic activity, the need for firms to become more efficient through strong incentives for managers and workers of state enterprises, as well as specific social and labor market reforms to enhance labor mobility. His reform proposals, particularly concerning the legal framework and corporate governance, contributed substantially to the understanding and performance of the transition economies.

In his most recent work dealing with the effects of wealth distribution on economic performance, Jan Švejnar and Sutirtha Bagchi show that a greater concentration of wealth in the hands of billionaires is associated with slower economic growth and that this negative effect is driven by billionaires connected with politics.

“Jan Švejnar is among those top economists who always have a policy perspective in mind. His insights have provided policymakers with the tools to master Europe’s greatest post-war challenge – the successful transition of the formerly socialist economies,” said IZA Director Klaus F. Zimmermann.

“Jan Švejnar is a wonderful choice for the 2015 IZA Prize. From his research on worker participation in firm management to the economics of transitioning communist countries, Jan Švejnar has had a profound influence on economics. Indeed, Švejnar helped to establish the entire field of transition economics. In addition to his significant academic contributions. Professor Švejnar has also helped to found and guide CERGE-EI to become an outstanding graduate education and research center, advised the Czech government on economic policy and privatization procedures, and nearly became President of the Czech Republic,” said Alan Krueger, former chair of the Council of Economic Advisers of president Barack Obama and member of the Executive and Supervisory Committee of CERGE-EI.

“Jan Švejnar’s work has deepened our understanding of the pitfalls and opportunities facing emerging market economies. His analysis has contributed to economists’ theory and knowledge, but also has had direct effects on the policy choices made in various countries. The IZA Prize is a well-earned honor,” said Rebecca Blank, Chancellor of the University of Wisconsin, Madison, and former US Deputy Secretary of Commerce and later Acting Secretary of Commerce.

The award ceremony will be held during the annual IZA/World Bank Conference on Employment and Development in Bonn, Germany, June 4-6, 2015.

Previous recipients of the Prize have included Professors Orley Ashenfelter, David Card, Alan Krueger, Dale Mortensen, Christopher Pissarides (the last two are also laureates of Nobel prize for Economic Sciences), and Columbia University’s Jacob Mincer, the first Prize recipient and considered by many to be the father of modern labor economics.

Established 1998 in Bonn, Germany, the Institute for the Study of Labor (IZA) is a private economic research institute focused on the analysis of global labor markets. IZA is a non-profit organization supported by the Deutsche Post Foundation. It operates a global research network of 1,300 economists from more than 45 countries. Based on academic excellence and an extensive publication strategy, IZA serves as a place of communication between academic science and political practice. According to the RePEc database of economic research, IZA ranks first among all economics institutions in Germany and second worldwide in the field of labor economics.