Dressing Up in Costumes: A Piece on Historical Re-Enactors

Visit a popular historical site this summer and it’s likely you’ll encounter someone in historical dress from centuries past, re-living an older period, whether it’ll be Roman times or World War II, and undertaking activities such as giving guided tours, and making 18th century cakes amongst other things. Such people are historical re-enactors, and being one myself I can say that we may be a group of people who might bemuse many, but who are just like you… in period dress that is… possibly carrying a sword. 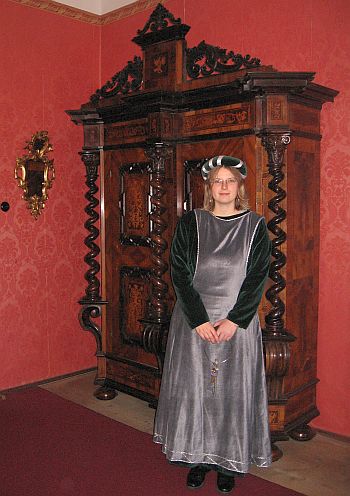 Lenka Nemravová from the Faculty of Arts of Charles University started re-enacting back in 2010. “I wanted to try something different than ordinary guided tours.” Lenka herself originally re-enacted the 19th century, but now re-enacts a character from medieval times known as “the keyholder” at Český Šternberk Castle in Central Bohemia, doing guided tours, where visitors can experience different periods in the castle’s history. Lenka does what many re-enactors do, add more colour to a tour of a historical place (which can sometimes be rather dull affairs) through trying to bring the history of the castle back to life in person. She’s also interested in the 14th century family of the Luxembourgs who were the kings of Bohemia and Holy Roman Emperors between 1308/1310 and 1437, and hopes to re-enact that period too. 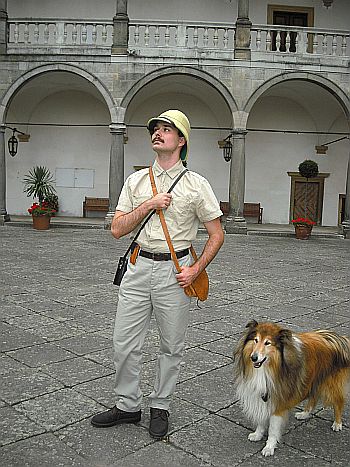 Another re-enactor is Matouš Vanča, a History and Philosophy student in the Faculty of Arts. Working at Chateau Opočno and Castle Rychnov in Eastern Bohemia, he originally started as just one of your usual “normal” guides; he then upgraded to a re-enactment guide after he was asked to act at an annual event in Opočno called “Castle Night”. In Opočno he plays a real-life character, Emil Holub, the famous Czech ethnographer, cartographer and explorer (a role which unfortunately features a “horrible moustache” (see picture); whilst in Castle Rychnov he wrote a complete theatrical tour with a number of characters, including the medieval White Lady (the most popular Czech ghost associated with castles), the executioner Mydlář from the 17th century, the famous and brilliant Baroque architect Santini, and the local painter Vocásek from the 18th century, characters all in one way associated with the history of the castle; meaning that he completes the ultimate feat of re-enactment – he re-enacts not just one period, but many.

As mentioned, I myself am a re-enactor, though I don’t do guided tours as such. I’m a member of a group called Historia Normannis, which re-enacts the Norman period of British history (roughly 1066-1215). The group appears across the country, setting up a camp (usually in a castle) and treating visitors to Norman cooking, fashion shows, and of course, fighting. Lots of fighting; with group members explaining to the public, in graphic detail, the weaponry and the horrible injuries they could inflict on you. These elements are not in what Lenka and Matouš do (though according to Matouš, his work in Rychnov features an art historian giving a tour-played by himself – being driven insane by interruptions from historical characters); but then again re-enactment is a diverse profession, covering lots of different activities (and time periods). To Lenka, re-enactment is enjoyable as “it is good to give people insight into history of the castle in a different way. Of course, it is entertainment for us who re-enact. You can get to know your colleagues in another situation. And it is very nice when children think, that you are a princess.” To Matouš, the fact that he was a drama student before doing history, means that re-enactment gives him a “unique chance to use both my disciplines (schools) in one action... this is for me occasional return to the wondrous world of drama.” 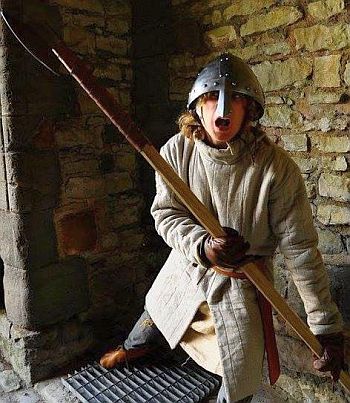 Despite the differences in what re-enactors do, and the fact that we are sometimes seen as being a wee bit strange (as I can speak from personal experience, given the many strange stares I have had), it can be said that all re-enactment has the same goal: to bring history to life. Unless a time machine is invented, the closest we can ever get to the past is people re-enacting it for us (I would say historical films, but it’s a fact universally acknowledged that they are of dubious accuracy). We may be figures of fun for many, but re-enactment brings to life often nameless people who otherwise would be no more than faded figures in a worn black and white photograph, or drawings on a scroll or book. Through people like Lenka and Matouš you have the closest link you will probably ever get to the past. We can never truly inhabit the minds of say a 13th century knight or a 17th century serf but we can try as best as we can to give an impression of what they were like. Of course we are never fully accurate (especially concerning language), but in us we hope you can see the people who once inhabited the Earth, at some point in history. Going to a castle can give you an idea of the art and architecture of a period, but re-enactors give you an idea of the people who lived in it.