Olympic medallist Mirka Knapková on the CU boat, and two-time Olympian Milan Bruncvík representing Cambridge and not his former alma mater, ČVUT: the make-ups of the crews taking part in the third edition of the University Eights competition, part of the Prague Primátorky (‘Mayor’s Eights’) regatta, brought more than a few surprises. The speed of the CU boat will be dictated this year by Antonín Mařík. We asked the first-year student of physiotherapy at FTVS about their preparations for the race.

The crew line-up is already known. Do you already know which vessel you’ll use this year? There are, after all, big differences between the boats.

Barring any changes, I’m expecting us to use the newest boat we’ve got and, because we’re Slávie, we’ll have red oars – almost the university colours. We might even have university strips, as well, overalls like ČVUT or ČZU, as t-shirts aren’t ideal for rowing.

The only survivors from last year’s crew are Václav Zitta and the cox, Sára Víchová. What’s your assessment of the new crew?

Václav Zitta’s a big strong guy who’ll keep us in there and Mirka is maybe faster than some crew members. The advantage of rowing is that a rower’s best years are around the age of thirty, as shown by Mirka and Ondřej Synek. I’d like it if the race was more dramatic than last year and even if we don’t win, I’d like to at least to push them. ČVUT has a good team, but ČZU has a better one.

While the plan was to meet at least once a week, it’s difficult to coordinate the diaries of nine people. Our coach Josef Lukš thought that we could start training early this year; the mere fact that we were able to get into a boat and row together made a massive difference. Don’t forget that this crew isn’t used to each another.

Are you planning any celebrations if you win?

We can’t, we have another race the next day, and also, I’ve seriously cut back on celebrations. They were a bit wilder before, but now I say: no thanks, I have to go and train.

Yours is the most important position on the boat. What was winter training like?

Winter training was tough, as we had the newly-opened U23 Youth Sports Centre at our disposal, where they do qualification in December. We had a month’s preparation time on training simulators, then double training sessions five or six times a week. You get fed up of simulators towards the end of the winter season. I do 35 kilometres per day during double training sessions, while following the display. It’s not a walk in the park, like some know from the gym. You’re always monitoring numbers, and we only talk to each other during warm-up or actual rowing.

You’re studying physiotherapy at FTVS. How do you make up for time spent training?

At Slávie we attend yoga every week. It’s quite nice, because for an hour we focus on what we need – stretching, stabilisation or strengthening. I’m in my first year at FTVS, so I don’t know the exercises yet, but I’ve tried out massages on my friends. 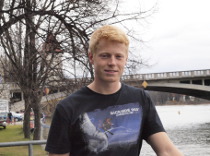 is currently an amateur rower in the Men’s U23 category and is supported through the scm+ programme and SVING academic fund. His current personal best performance is ninth place at the junior world championships.