Friday, 29 November 2013, saw the preview of an exhibition organized by the Institute for Classical Archaeology and chronicling a decade of research in the Western Desert of Egypt. Located in the entrance hall of the Faculty´s venue at 20 Celetná, the exhibition is accessible free of charge to the academic and general public during the Faculty´s opening hours. 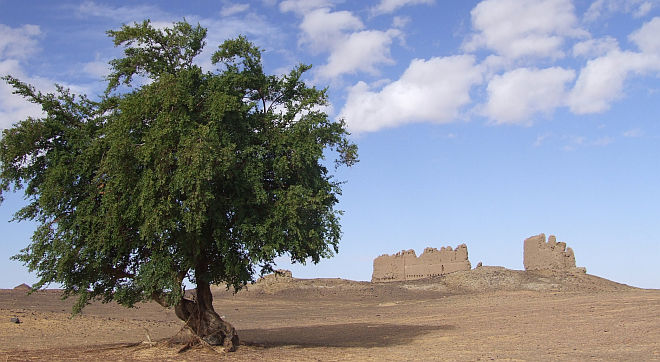 A decade of archaeological research in the Western Desert of Egypt and the El Hayez oasis (known by the Ancient Romans as Oasis Parva) has brought new findings on the nature and structure of settlement in the area in Roman times, i.e. in the first five centuries AD. Previous research had concentrated on necropolises and temples; however, the projects launched by the Czech Institute of Egyptology in 2003, with follow-up projects in recent years under the Institute for Classical Archaeology, have brought new findings on everyday life in the desert. “A specific base of sources and the state in which they have survived have made it possible to explore the structure of the settlement while improving the understanding of the broader links between these remote areas and the surrounding world of Ancient Romans,” says PhDr. Pavel Titz, Ph. D., of the Institute for Classical Archaeology, CU FA.

Unlike the Nile valley and delta, the Western Desert enables researchers to explore the context of the entire area, which was once populated, with all its components – settlements, farm land, manufacturing buildings, roads and burial sites. Doing research in oases may produce answers to some important questions about the growth of the settlement over a very long period from the aridification of the desert and the population´s departure for the banks of the Nile to the settlement of the Old Empire to the boom under the ancient Romans to a decline in the Byzantine, medieval and modern times.

“Given the nature of the archaeological and historical sources and the previous interdisciplinary research by the Czech team, we have decided to give preference to non-destructive techniques. Satellite images, field prospection and the use, for the first time, of vertical photography using a kite enabled us to make a more precise interpretation of the data, making it possible to make a more detailed description of the structure, nature and growth of oasis settlements,” says Pavel Titz.

Flying a kite with a camera attached turned out to be an ideal method to make vertical photography of the desert. By processing and compiling such images, we have been able to produce detailed imaging of vast areas and to conduct a spatial analysis of the localities surveyed. “Our future plan is to apply this non-destructive method in the survey and documentation of the localities under research especially because these localities have very little protection against adverse meteorological conditions," says Pavel Titz.