Room number J1034, the biggest lecture room in Jinonice, is one I have never entered before the audience with the US ambassador Mr. Andrew H. Schapiro but it was full by the time he and his bodyguard entered followed by a little train of politics club members who had set up the event.

Upon seeing the US ambassador I thought ‘he could pass for Czech’ until he started talking in a received Chicago accent. He explained he had a very special connection to the Czech people and their lands himself, his mother’s family lived here and he had brought his grandmother’s report card from Charles University to show us all. It was easy to see how much this country means to him, and how much of a blessing he considered it to take on the role of ambassador. 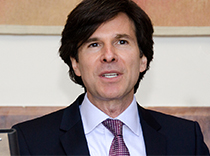 Mr. Scharpiro began with a speech covering his activity in the relatively short time he has been in the position (6 ½ months) including travelling around the country to meet military groups, businesses and local non-governmental organisations (NGOs). In terms of security he met the Czech general who is going to be in charge of the NATO operation ‘Allied Spirit II’ (which, he said in response to a later question, is a large military drill for multiple NATO states aimed to test the use of specialist equipment). He has also met both Czech and US brigades whom he praised for their co-operative attitudes and bravery.

He also spoke, cautiously at first, about what the Czech position means for the recent proclamations and actions of ‘Putin and the Kremlin’ (he refused to refer to this as ‘Russia’ avoiding such a blanket statement) considering the ‘illegal annexation of Crimea [as] a test’ of European and North Atlantic unity and in spite of his optimism and gentile form he was clearly capable of also being bold in this regard and I suspect in difficult diplomatic relations he would not only be likeable  – he has a steel in him too. Both of these qualities were not much needed with the crowd of students however and what shone next was his intelligence as he stated ‘war arises from not understanding each other.’

He then moved on to talk about the economic side of his job, highlighting the success of companies working alongside universities in both Europe and America. To my ears this was a fresh innovation and I was interested by it but given this is Charles University half the audience were probably sighing and saying ‘finally someone gets it.’

Finally Mr. Scharpiro spoke of the shared values of the Czechs and Americans. He was witty throughout but here he got the big laughs and perhaps revealed why he had been chosen; he not only understands (and loves) what it is to be the voice of the USA but he also understands and loves what it is to be a Czech and where the similarities lie in 2 seemingly different societies and nations. Whilst I was surprised to hear him refer to the Czechs as ‘one of the most tolerant open and inclusive societies not just in Europe but the world’ I felt that he meant it and wished to see this tolerance reach his own country more, he used this to raise the danger of islamophobia – which he rightly identified as a fallacy and one that is prevalent in Europe in these difficult times, but conversely he showed through speaking of meeting Czech Roma NGOs that even strong tensions and age old divisions can be overcome through tolerance and affirmative action.

It is common practice for a speaker to, at some point in their talk, claim that the next thing they say is the most important, that ‘if you hear nothing else hear this’ and for the ambassador it was that the Czech Republic has ‘graduated’ from being solely a receiver of protection within NATO to become one of the protectors (and within this it has graduated the term ‘post-communist country’).

After the talk, time came for questions and even though the students liked him they were not letting him off the hook!  Questions from my colleagues clearly challenged the ambassador but he did not come across as surprised or stumped by any of them and answered each one carefully: first was a question on Russian action in the Ukraine, are they preparing an offensive? The ambassador was truthful – he didn’t know but he knew that Putin and the Kremlin were testing (as he had said earlier).

The second question was regarding energy trade: would the USA help Europe become energy independent and what role would liquefied natural gas play? The answer here was a practical one, the infrastructure required to make European ports ready to receive and reconstitute liquefied gas would not be worth the investment but generally energy independence was a foreseeable possibility. Of course to European eyes the American position on renewable energies seems backwards and the ambassador was sceptical of the potential of solar power.

After this I attempted my own question, hoping to reveal the ambassador’s ideological views of International Relations (IR). He had earlier praised the rise in defence spending in the Czech Republic and said it would be necessary to combat ISIL and similar threats head on but is more always better in military spending? Coming from a state where the spending is far more he felt that more than 2% of GDP of a state (as is the minimum target for NATO allied states) is fair but he explained that his view as an ambassador had to be that of his country and priorities likewise. I suppose I got my answer in that we now know the ambassador’s view on how to be a good delegate is to wholeheartedly take on board the views of ones state as one’s own. Later he elaborated on his experience as an ambassador as making him more patriotic, hopeful and optimistic than before and he saw the world of IR was not the gilded halls of aristocrats treating war and peace like games but rather groups of people all attempting to keep their countries safe and guarantee mutual benefit and prosperity. His views on what IR should be are bound by having to uphold the standard of his country, regardless of how that aligns to his personal preferences but his views on what IR is are extremely positive and give those of us who study it (or at least me) hope and optimism too.

The final question was regarding drone strikes, an example of the audience’s priorities was that you could feel the way everyone started making mental connections to the internet posts and memes regarding drones as the questioner asked about the ‘many thousands killed in collateral.’ This is, of course, an overstatement brought on by the exaggeration the internet can give to a news piece and the ambassador corrected the questioner on this but then also went on to explain that the US condones drone usage as we are safer knowing the enemy cannot be safe.

That was the end of the talk; the politics society gave Mr. Scharpiro a tee-shirt, badge and bag full of other gifts and he went among the crowd that chose to stay behind, talking to the other people that had more questions until his guard told us he had other appointments and had to go. ‘I should at least shake hands with these people,’ the ambassador said and as he passed me he shook my hand.

‘Thank you for your question, are you a journalist?’

‘Yes, for the student newspaper – actually, you’re my first article.’

‘Oh wonderful, and you’re British?’ he said as he continued to be escorted towards the exit.

And I hope I did, he is warm and kind which may not at first seem to be important or necessary qualities for a diplomat but certainly are for a man representing a country; his optimism is encouraging and I for one am confident that he can play his role in the world well.