Jan Laco: Pathology isn’t a 100% science - of course like everything in medicine

Most people are just going to work when Professor Jan Laco analyses his first morning surgical specimens and examines microscopic findings. As the head of the molecular pathology laboratory at the Fingerland Department of Pathology, in addition to routine diagnostics, he specialises in prognostic investigation and predictive markers for cancer. 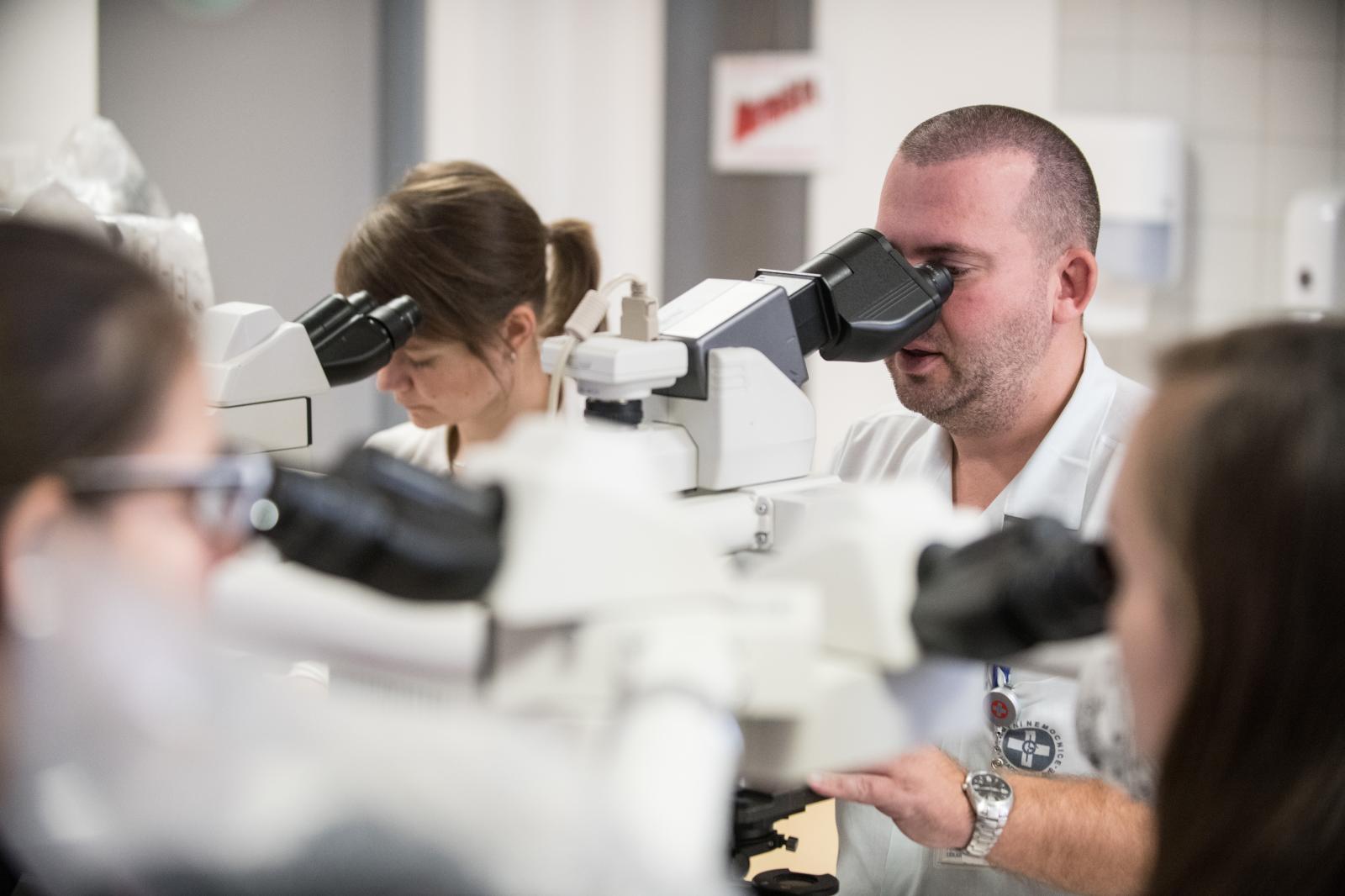 “We are dealing with microscopic diagnostics of specimens taken from living patients during surgery,” says Jan Laco, “this field doesn’t just require you to learn the theory of disease, although of course we lecture and test students on systematic pathology. On the other hand, pathologists have to memorise hundreds of microscopic images of individual diseases from textbooks and atlases. When diagnosing individual cases, they then compare findings in the microscope with these images and determine the diagnosis. We’re actually teaching students something a little different than what we do in practice and which we earn our living from.”

It’s biology, not mathematics, so there’s a grey zone where not even two experts can agree if it’s this or that disease, and sometimes even whether the tumour is malignant or benign, for example.

It’s biology, not mathematics, so there’s a grey zone where not even two experts can agree if it’s this or that disease, and sometimes even whether the tumour is malignant or benign, for example.

In the field of gynecological pathology, he is involved in interdisciplinary cooperation both in the description of interesting rare tumours and their close molecular and genetic characteristics, partly in noting changes in the methylation of genes in malignant ovarian tumours. 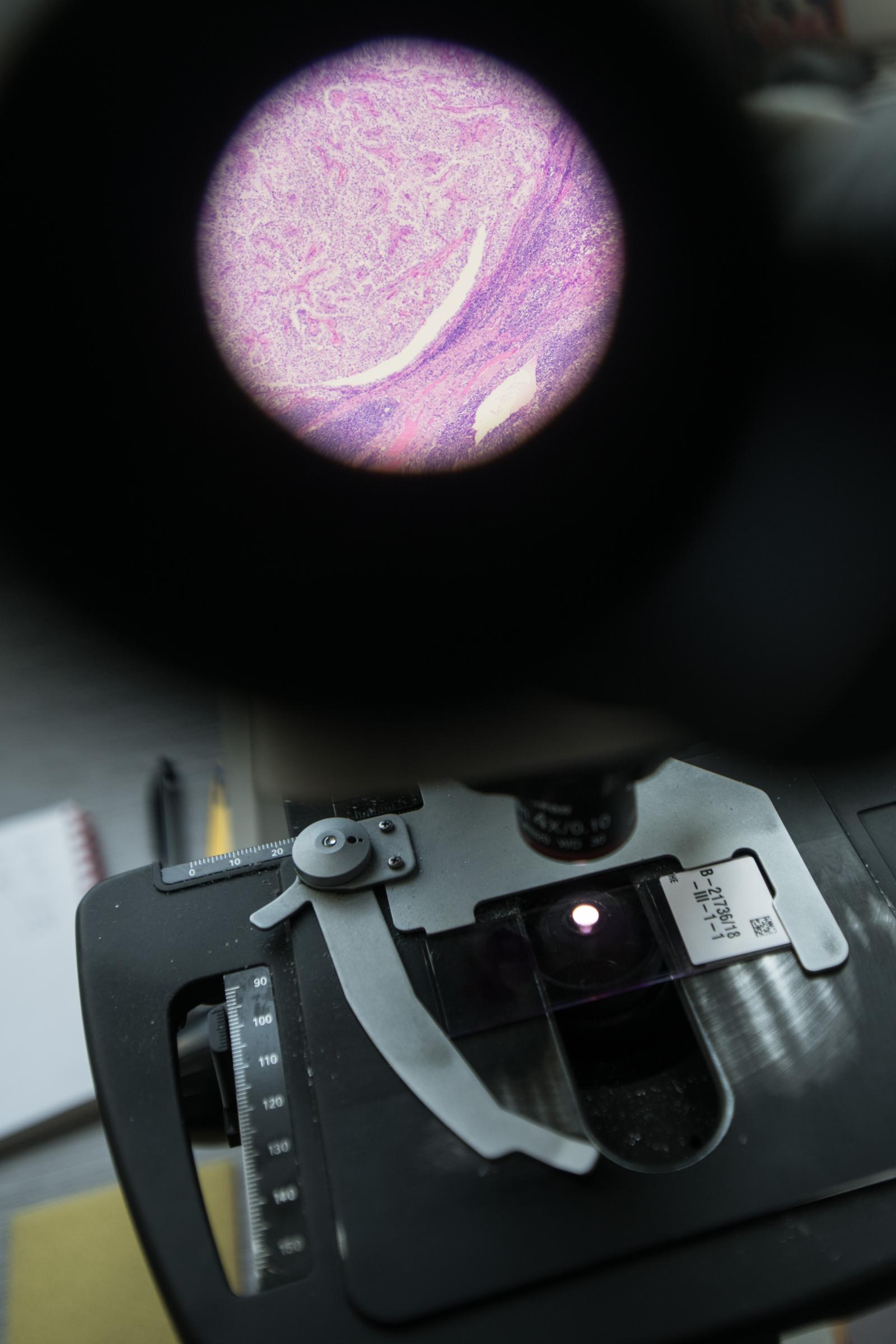 The third area of his research is in the so-called IgG4 disease, which is currently a highly discussed topic in medicine across many disciplines. The disease is related to elevated levels of G4 immunoglobulin antibodies. At the center of interest for Professor Laco and his team are the manifestations of the disease in the pancreas, salivary glands, aorta and retroperitoneum (the space between the abdominal cavity and the spine, i.e. around the kidneys). “Recognition of this disease is important because if it is diagnosed correctly and in time, it can be treated relatively well. Therapy is based on corticosteroids, and most patients respond very well to treatment. It’s important for pathologists to know how the disease looks in the microscope, and to share the correct diagnosis with the clinician,” the team’s boss says.

Pathologists previously concentrated on malignant tumours only on the diagnostics of their own tumour cells. With the development of immunotherapy, however, they are becoming more aware of inflammation around the tumour as an immune system reaction, whose role is crucial in the fight against malignant tumours. “When we see a malignant tumour, it means that the immune system has failed.”

Most diseases have a well-defined picture, but as Jan says: “It’s biology, not mathematics, so there’s a grey zone where not even two experts can agree if it’s this or that disease, and sometimes even whether the tumour is malignant or benign.” In most cases, there are clues how to correctly diagnose the given disease, but in certain areas, unfortunately, the grey zones include both extremes which are completely different for the prognosis and treatment of the patient. “If I’m not able to clearly sort a specimen into some drawer, I propose a differential diagnostic balance, which is a fair approach, I think. Fortunately, even clinicians know that pathology isn’t a 100% science - of course like everything in medicine.”

In this field, the influence of the human factor is significant because the interpretation of a microscopic image subjective to a certain extent. “One should always remember that they’re not infallible, that they can make mistakes, that they should always approach diagnosis with humility and know their limits,” Jan Laco says. This is why pathologists at the Fingerland Department and elsewhere, in the event of uncertainty, consult among themselves about specimens. Often, in an effort to come to the correct diagnosis, they use auxiliary biological methods such as immunohistochemistry.

But some cases are so complex that there is currently no reliable methodology for unambiguously identifying the disease.

The greatest nightmare for every doctor is that they have made a misdiagnosis. In pathology, you can make a mistake which is not essential for the patient and which they may never find out about. For example when two benign tumours are exchanged. “But there are the mistakes that take you back, and you realise that you always have a lot to improve upon.” A typical problematic area is the diagnosis of skin lesions which are created by pigment cells (melanocytes), when you consider whether it’s just a non-serious pigment nevus (in layman’s terms, a mole), or an aggressive malignant melanoma.

Unfortunately, in some cases a pigment neva and malignant melanoma can be quite similar,” It could occur that a pathologist incorrectly diagnoses the given lesion as a mole, and the patient comes in a while later with a metastaticized malignant melanoma.

A branch of pathology which is currently being intensively developed is telepathology.

Thanks to advanced computer technology, it is possible to scan microscopic images and with the help of special software you can then view them. Technology can also be used for the creation of educational microscopic atlases for students and pathologists, or for consultation on difficult cases with colleagues on the other side of the world without having to send the microscopic slides by post.

The idea that computers themselves would carry out microscopic diagnostics as part of routine work is nevertheless something out in the distant future. The reason, according to Professor Laco, is the fact that specimens of the same disease always look slightly different each time.

“In addition, various artifacts could occur in the tissue - variable intensity of colouring, lumping or an unfinished cut. Educating computers at the existing level in such a way so that they do not make the wrong diagnoses would take too long, I believe. But it’s possible that in this regard not all of my colleagues would completely agree with me, especially those with a warmer relationship to computer technology. Of course I hope that it’ll be me looking into the microscope and not some robot,” he finishes with a laugh.

“It’s biology, not mathematics, so there’s a grey zone where not even two experts can agree if it’s this or that disease, and sometimes even whether the tumour is malignant or benign, for example.