“Novembers” and Their Impact on Czech History

The Novembers exhibition of CU (Karolinum, 17. 11. 2014 – 28. 2. 2015) explored the crucial date of the 17th of November whilst simultaneously exploring the power and manipulation of history; as the introduction to the exhibition stated “this is a story of a myth, political kitsch and calculated propaganda.”

The exhibition concentrated on the two Novembers of 1939 and 1989 and the “violence perpetrated against defenceless students whose protests have twice had an impact on Czech history.”  The exhibition explained the historical events of the 1939 and 1989 Novembers; their connections, similarities and differences. 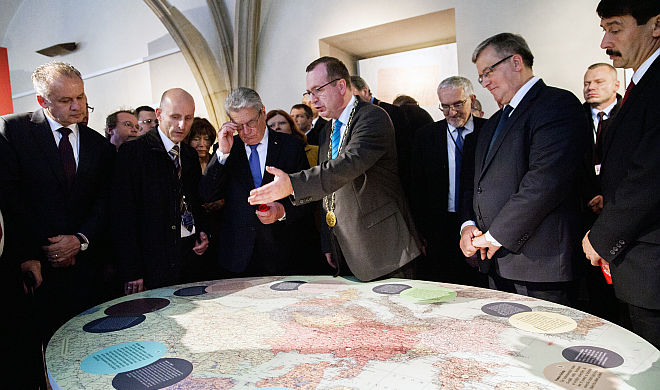 November 1939 was the last month of open anti-German demonstrations in Czech lands until after the World War II. The 15th of November 1939 was the funeral of CU student Jan Opletal, which became a demonstration against German Occupation which was met with severe oppression by the Nazi response. The Nazi reaction came on the 16th and 17th of November. It was a response of mass arrests, executions and deportation of many people to concentration camps; to quote the exhibition: “this is how one of the most vivid Czech myths of the twentieth-century was born.” It caused radicalisation of many students joining resistant groups in and outside of Czech lands.

November 1989 was resistance to a different system, the Communist regime, where on the 17th of November Czechoslovakian communist security brutally attacked demonstrating students who were commemorating the events of November of 17th 1939 using it as a symbol to resist their contemporary oppressive authority. The brutal oppression of students caused more and more people to resist the Communist regime, even the system’s previously greatest asset of the “silent majority.”

The difference between these events, the exhibition argues, is that 1939 was the ending of protests and was sophisticated, systematic oppression of a system in control whereas 1989 was the start of resistance and was crude brutality of a demising system. But both contained the same message that “one-off action means little or nothing unless it is followed up.”

Novembers did not leave the events of November the 17th of 1939 and 1989 as isolated but set in a time period of other resistant. For example, the exhibition discussed the boycott of public transport in the summer of 1939. It also looked at the events of November 1939 as a symbol for resistance that was not only utilised in 1989. In November 1940 students from Czech lands studying in London created a drama programme to mark the anniversary and as anti-German activism. Doctor František Buriánek’s statement in the 1964 radio report is another example of the exhibition exploring the symbolic use of November the 17th. Dr. Buriánek said “November the 17th did not end with our fate in concentration camp… it is a continuation of the old struggle, though in a new changed international situation, though with better prospects.” Dr. Buriánek’s speech highlights that the meaning of November did not stay the same. One of the summaries of the exhibition explains how in the 1950s its meaning was anti-German, in the 1960s the emphasis was on peace and then under the normalisation era it took on the meaning of anti-imperialism, anti-brutality and anti-racism. The exhibition concluded in contemporary society it has taken on a meaning of society’s wide-changes.

The exhibition pointed out how anniversaries “are a time for us to revisit the past and to think about where we are going”; a general trend of historical anniversaries shown in events of the summer of 2014 exploring World War I, the event, its impact and its continuing legacy. It also highlights how history not only caused the present but is part of it.

The exhibition presented the history of these two dates through an array of different sources. The viewer is first shown a summary of the exhibition written by the producers of Novembers. These summaries are provided throughout the exhibition to bring together the different sources of each section. Then there was a timeline which put the events in context. Through the exhibition books were included on individuals who resisted in connection to either of the 17th of Novembers. These books contained a short description of the person, their life, their resistance and photographs of them. This added a very personal effect to the exhibition, making Marek Frauworth not just one of the persons who were executed in 1939 but an individual with friends, family and ambitions.  The Novembers were also presented through film; this however, was the only part of the exhibition not accessible to English speakers. The exhibition also included two tables of maps of Europe, one of 1939 and one of 1989, which linked student resistance and repression of students around Europe. For instance, the 1943 fire at Oslo University that was used as propaganda to close the University and oppress students was marked on the map.  The exhibition also contained materials such as the banners used at the protests, photographs, propaganda posters of both regimes and videos of the police brutality of 1989.

The Novembers exhibition explored the symbolic date through multiple different sources and different usages to highlight that “November the 17th is not just a historical date in the calendar.”