Nothing suspicious about a European identity: study by the Collegium Europaeum

“The Collegium Europaeum is an open community of researchers from Charles University and the Academy of Sciences of the Czech Republic,” says PhDr. Petr Hlaváček, Ph. D., founder and coordinator of the Collegium Europaeum research group. Last year the Collegium presented to the public a new book entitled Vytěsněná elita (‘The Displaced Elite’) and this year it plans to start publishing a specialist journal entitled Vertigo. 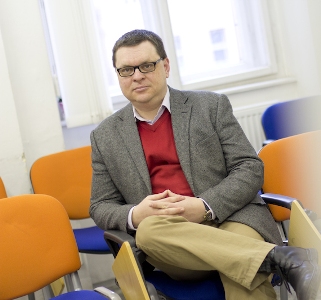 Could you give a brief introduction of the Collegium Europaeum?

The Collegium Europaeum was created in 2008 as a joint research project of Charles University and the Institute of Philosophy of the Academy of Sciences of the Czech Republic. At the time I was returning from a similar ‘set-up’ in Leipzig, the Centre for the History and Culture of East Central Europe, and in Prague I wanted to look into something that many people regard as somewhat suspicious: European identity. The Collegium’s agenda exceeds the bounds of the academic community – we have cooperated with, for example, the Austrian Cultural Forum, the Office of the Government of the Czech Republic and the Václav Havel Library.

How can one become a member of the Collegium?

The Collegium is an open community of researchers from Charles University and the Academy of Sciences of the Czech Republic. It currently consists of four scientific staff, two postgraduate students and a number of our colleague with whom we are engaged in loose cooperation.

In addition to this we organise an annual Collegium Europaeum experimental seminar for postgraduate students of the CU Faculty of Philosophy, irrespective of institute and field, featuring lectures by philosophers, historians, sociologists and political scientists. These seminars are quite popular.

Are you also involved in publishing activity?

Yes, we publish two book series: Europeana Pragensia focuses on European intellectual history, and we regularly publish a series about the Bohemian Reformation in English called The Bohemian Reformation and Religious Practice. We also publish some part that are not part of these series, for example Intelektuál ve veřejném prostoru [‘The Intellectual in the Public Space’], Vytěsněná elita [‘The Displaced Elite’], a book about the forgotten Jewish scholars of the German University in Prague, and Kacířská univerzita [‘The Heretics’ University’], which traces the history of the university during the Bohemian Reformation. We are currently preparing a book entitled České vize Evropy [‘Czech Visions of Europe’], which will be published this year to mark the tenth anniversary of the Czech Republic’s membership of the European Union. 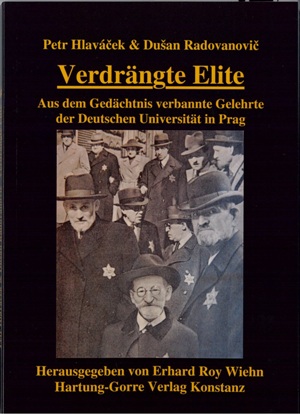 You mentioned the book Vytěsněná elita. What makes it, in your opinion, exceptional?

The book was published in Czech in January 2013. During its formal launch in the Jewish Museum, the former Czechoslovak exile in Basel Pavel Chabr, came to me and suggested that we publish the book in German, too. He immediately contacted his friend Erhard R. Wiehn, emeritus professor at the University of Konstanz, who is quite close to Czech affairs – he has been visiting the Czech Republic as a sociologist and historian since the 1960s and was personally affected by the tragedy of Czechoslovakia in August 1968.

Pavel Chabr then translated the book over the course of several months and it was published in November by Hartung-Gorre under the title Verdrängte Elite in the Shoáh & Judaica / Jewish Studies series, and is thus now available to German readers.

Do you see a symbolic significance in its publication in German?

Certainly. It concerns, after all, forgotten personalities in the history of the German language, primarily those of Jewish origin, as well as the now-forgotten Charles-Ferdinand University in Prague, or rather its German part. In its time the German University represented a specific intellectual in the culturally rich environment of Prague.

What does your work schedule look like for this year?

Right now we’re preparing to start another journal. It will be called Vertigo – like the U2 song or the Hitchcock film – with the subtitle ‘Revue for European debate’. ‘Vertigo’ in Latin means dizziness or turnaround; and we, too, sometimes feel a sort of dizziness from European topics. Vertigo could become a kind of dialogue bridging the gap between the academic community, any interested members of the public and maybe even the political elite. The year 2014 will, in any event, be a real adventure.