Emma McCullough from the University of California, Santa Barbara is a scholarship holder of the Fulbright Commission. She is currently spending a research year at the Faculty of Arts of Charles University in Prague. The topic of her research is rather unique for a young American student– Emma is writing her PhD thesis on four important ladies from Czech music history.

Czech people would no doubt be familiar with the name of the first lady she writes about. Eliška Krásnohorská, the librettist of Bedřich Smetana, has after all a prominent life-size statue on one of the most frequented places in Prague, Karlovo náměstí. But the name of the second lady would be already unknown to many – except historians and music experts. Marie Červinková-Riegerová, daughter of František Ladislav Rieger and František Palacký’s granddaughter, was however an important member of Prague society in the second half of the 19th 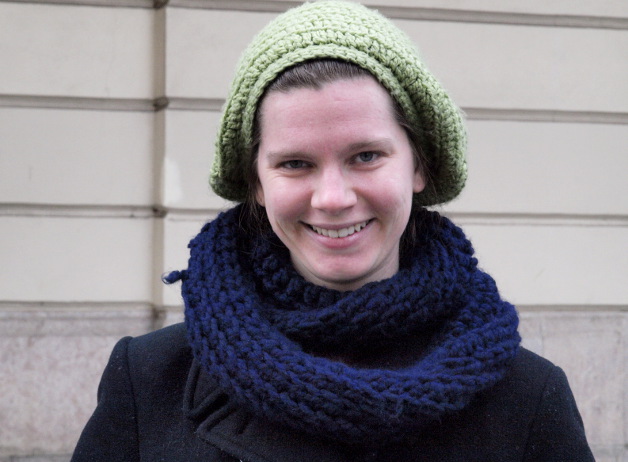 Emma, how does a young American girl start research on such a unique topic as Czech female librettists of the end of the 19th and beginning of the 20th century?

I started graduate school knowing that I wanted to study Czech music, but I wasn't sure what I wanted to do with it. During my first year of graduate school my advisor taught a class on Czech nationalism in music and suggested that I might look at Dvořák's Jakobín (The Jacobin). I really liked the opera and was also fascinated when I realized that the librettist was a woman, Marie Červinková-Riegrová. There is really no other time or place in history where women were so commonly engaged in writing libretti, so it seemed like an interesting cultural moment to research.

The better part of the books you need to work with as well as your resources  are written in Czech. Did you know any Czech before you decided on this topic? Was it difficult for you to learn it? You are able to read in Czech now; are you also able to speak it or do you have any difficulties?

I was lucky to be able to take two years of Czech language classes in graduate school. It was kind of an interesting arrangement, though. The teacher and the other students were all in a classroom in Los Angeles and I was in a video studio in Santa Barbara. It was a little weird sometimes, but Czech classes in America are quite rare, so I felt really lucky that I was able to study Czech at my own school. I was also able to come to the Czech Republic to do a summer language school in České Budějovice in the summer of 2010.

So, in terms of textbooks, my Czech is pretty good... but as I quickly discovered, the Czech spoken on the streets of Prague is nothing like the Czech you learn in a textbook. Particularly because my research tends to be solitary, I feel like even though my reading skills are getting better, I am still pretty self-conscious about my spoken Czech. Especially since I mostly read 19th-century documents and academic journals, the vocabulary I'm learning is pretty useless in social situations. It's a really tough language, for me, but in a way that makes it even more rewarding when I see even small signs that my Czech is improving.

You write about four rather different ladies. Do you have any favourites between them (and if yes, why)? Or is your attention equally divided?

One of my favorite things about my research so far is that I really feel like I've started to get to know these women through their letters and their works. They each have distinct personalities, but one thing I think they have in common is that none of them were content to just sit at home and manage the servants or take care of the family (out of the 4 writers, only Gabriela Preissová had children). They all had higher aspirations and followed through with them, which I think is really brave.

If I had to pick a favorite, I think I'd have to say Marie Červinkova-Riegrová, since she is the one who got me started on this project and the one I've done the most research on, so far. It is quite difficult to divide my attention evenly, since there is so much information on each of these women, particularly Červinková and Krásnohorská.

As much as I'd like them to receive equal treatment in my dissertation, I know at the end I won't be able to do that because I'd wind up with a 600 page dissertation and I'd be in graduate school for about 4 more years...

You run your research in several archives and libraries. Was it difficult for you as a foreigner to navigate between these institutions?

As a foreigner and someone who is really just starting as a researcher, it is intimidating to navigate the libraries and archives, but I've had so much help. My advisor, Professor Jarmila Gabrielová from Ústav hudební vědy (Institute for Musicology) of Faculty of Arts, has been invaluable in suggesting directions for my research, recommending sources, helping to facilitate access to the archives and the university, and allowing me to sit in on her classes.

I'm also really grateful to David Beveridge, another American Dvořák scholar who lives in the Czech Republic. He actually invited me to come to an archive with him when I arrived here, which helped me figure out the system and get to know some of the archivists.

Anežka Polášková, the librarian at the Institute for Musicology, has also been very patient with me and really helpful in navigating the Charles University libraries. And, of course, I would not be here without the Fulbright Commission, which awarded me this amazing opportunity, and particularly their staff in Prague who have been incredible in facilitating my stay here and in answering lots of questions!

There are also memorial places of some of the ladies you write about in Prague. Have you already managed to visit some of them and do you have any favourites?

It's exciting for me to be around Prague and to see monuments both to my ladies and to other important musical figures. I particularly love the statue of Eliška Krásnohorská on Karlovo náměstí. I see it every week when I go to choir rehearsals nearby, and she just looks so calm and lovely. It can be really refreshing to see her there smiling at me on weeks when my research feels overwhelming.

A bit more indirectly, I live very near Riegrovy sady. There's a statue there of František Ladislav Rieger, Marie Červinková's father. Even though he isn't a main focus of my dissertation, he was a crucial influence on Marie's life and actually helped Dvořák finish Jakobín after Marie's death in her 40s. I like to go on walks through the park and I always stop by the statue of Rieger. I like to hope he is giving me his blessing to dig through all of his letters!

How do you actually like the operas the librettists you research about texted? Have you had any opportunity to see some of them here in the Czech Republic or back at home or do you plan to?

I love Czech operas. It can be so easy to get really bogged down in documents and books and forget about the music. Particularly since Christmas I have been making a conscious effort to make sure I'm doing something with the music every week, whether that is checking out scores from the library, listening to the operas on recording, or going to the opera to actually see them.

I'm embarrassed that it took me so long, but I actually just went to the Národní divadlo for the first time this week! I got to see Jakobín in the theater where it premiered about 120 years ago. I can't even begin to describe how special that was. I got goosebumps when I sat down and saw the inscription “Národ sobě” over the stage. Now that I've been once, I hope to go as often as I can. Particularly with a student ID the tickets are so reasonably priced and you get to see singers who are world experts on this type of music in the venue for which it was composed.

This was actually only my second time seeing a Czech opera live. American singers aren't trained in Czech diction (how to pronounce the words), and most of them are intimidated by it, which is too bad, since it is really a great language for singing, no more difficult to pronounce than German or French. That's how it is, though, so very few Czech operas are in the repertoire in America.

I have seen some signs that this is changing, though. Renée Fleming, a famous American soprano has been a great advocate for Czech and other less well-known repertoire, and it seems like American opera companies are starting to be more open to doing more Czech opera.

Thank you for the interview.