The Story beyond Pompeii

When we think about archaeology in Italy, we automatically think about Pompeii and Herculaneum. It is the defined topic in schools, the basis of TV programmes, books and films, it is what the media will dedicate some tiny article to at the back of their newspaper. But, as Dr Girolamo Ferdinando de Simone’s lecture on: ‘The Dark Side of Vesuvius: Archaeology beyond Pompeii and Herculaneum‘ (Faculty of Arts, December 11) demonstrated to me, there is a whole territory undiscovered and unknown, a mystery about to be unravelled by de Simone and his team. 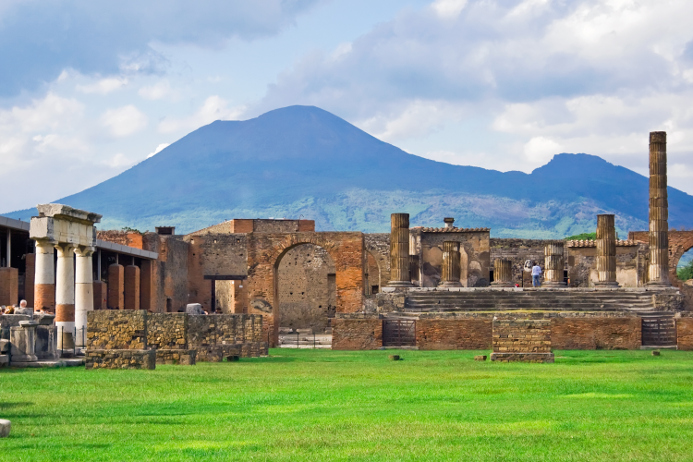 De Simone set up the Apolline Project in 2004 in order to investigate the northern slopes of Vesuvius, the territories known as Nola and Neapolis, to unearth the story of the people who lived and died on the other side, and the impact of the famous eruptions here. Of course, we all know the AD 79 eruption, but what many of us don’t know, de Simone points out, is that there were actually several more eruptions that had a dramatic effect on these ancient settlements. In this sense, de Simone claims that our perception of the area is actually incomplete and misled: we always look at certain regions and certain timelines, when there is a whole story beyond these. There has been a dominant assumption that the northern slopes of Vesuvius were deserted, and a lack of comprehensive maps on this area.

But an archaeological revolution is forming under the Apolline project: De Simone’s team has unearthed almost the entirely of the Roman baths here, and a number of villas in the town of Pollena Trocchia. The team were able to discover evidence of volcanic material from the AD 79 eruption, which proves that the complex was built in the years after the eruption and so, contrary to popular belief, the eruption actually did not destroy all life in the area. The discoveries of the project have been extensive and extremely beneficial to the overall archaeological understanding of the whole area of Vesuvius. For example, a brick stamp imprinted onto a tile lining the bath, was able to tell these archaeologists of the presence of the Domitti family, a famous Roman family who had produced this very stamp. Discoveries also brought new questions to light: for example, the discovery of two young children buried inside two large pottery vessels usually used for transporting wine, remains a source of wonder to its discoverers. The Apolline project has only just began, and there is much left still to learn.

The most important feature of the Apolline project’s discoveries, however, is the awareness it brings to the fact that the story of Vesuvius is not yet told. There is a whole other side, until now unknown and undiscovered, and a whole new mystery waiting to be unravelled.

A topic that sparked my interest from de Simone’s lecture was the lack of funding and opportunity within archaeological investigation. These projects are incredibly beneficial to our learning and understanding, and thus of great importance to society. They deserve to have the financial opportunity to be carried out to full extensive ability. The local participation the Apolline project offers is impressive: De Simone opens the sites every year for locals to visit. Educational trips are set up for school students to visit and learn the story as it unfolds and progresses. Archaeology, in recent years, has not been offered the credit that it deserves. There is a reason we only know of Pompeii and Herculaneum. There is a reason that, before this lecture, I had not even been aware of the Apolline Project. These projects deserve a bigger space in the media and the public eye, enabling them to gain better support. If we are to know the story, we ought to know the whole story, not just part of it.