'The route to democracy is difficult,' explained Tea Tsulukiani, Minister of Justice for Georgia. On Friday 21st November, the Faculty of Law was pleased to host Ms Tsulukiani for a short but detailed account of the changes taking place in Georgia in light of relations with the European Union.

Although Georgia currently does not hold any official status as a candidate for membership of the EU, in recent years Georgian political figures have expressed the wish to participate in enlargement of the European Union in an attempt to become more independent of the pressures of Russian influence. Like many guests invited to speak at Charles University at this time of year, Ms Tsulukiani mentioned in light of the 25th anniversary of the Czech Republic's Velvet Revolution the influence the Czech struggle for strengthening and achieving democracy has had on her country's political agenda. 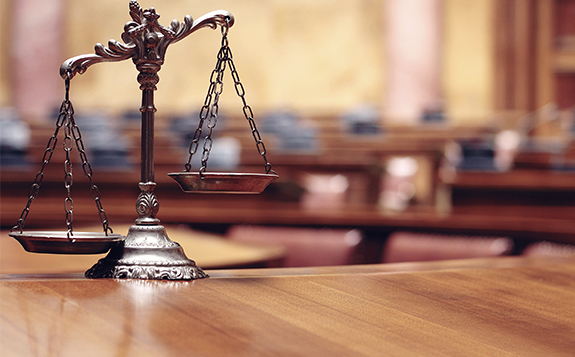 Ms Tsulukiani advised as to the existence of two key pillars of documentation relating to the reforms in the Justice Department of Georgia in light of Georgian relations with the EU – the Association Agreement signed in June 2014, and the Action Plan laying out objectives for stable cooperation between Georgia and the EU. Europeanisation of the country requires governance in line with the established principles of rule of law, protection of human rights and fair and equal justice. With regards to these pillars of contemporary European society, three different waves of reforms have taken place in the justice sector of Georgia's Government, focused on isolating the judiciary from the executive powers and outside influence in order to retain and strengthen the impartiality of judges in the country, and for two years now the High Council of Justice has been free from the influence of politics. This depoliticisation of even the highest tier of judges ensures more democratic judicial proceedings. Further work is required in the justice sector, according to Ms Tsulukiani, in particular on the Prosecutor's Office, the provision of legal aid – which has so far been guaranteed as independent and transparent by new laws in December 2013 – and the Criminal Code of Georgia which already has seen reforms to ensure compatibility with human rights. The Minister mentioned a number of reforms on a diverse range of topics, including LGBTQ rights, protection for whistleblowers, and freedom of information. These and other reforms to the judiciary of Georgia further emphasise the overall tone of these waves of change – transparency of regulation and procedure and equality between parties as the motivating factors.

Ms Tsulukiani also highlighted the success of the country in reducing and maintaining low rates of corruption. The Minister noted that this has hugely positive ramifications for the country's economy through increased investment which in turn encourages economic activity and growth. As the Minister of Justice, Ms Tsulukiani herself chairs the Anti-Corruption Governmental Council and invites a range of business leaders from different sectors, academics and experts in the field to ensure that the Justice Department is informed on how best to continue fighting against corruption on the elite-level.

Concluding the list of reforms which already have and will in the future take place, Ms Tsulukiani expressed her belief in respect for the work of political predecessors. She stated that because no Government is able to remain in power and in control of reformation indefinitely, all she and her colleagues can hope for is to leave behind a legacy 'so good that the next Government will be willing to build on it.' It seems that regardless of whether Georgia's accession to the European Union takes place in the near future, Ms Tsulukiani and her colleagues will continue in their determination to leave behind a democratic and just society for her successor to improve upon in line with European principles.