Recent doctoral graduate Vojtěch Kubelka at Charles University, Prague, is the lead author of an article in the magazine Science that describes trends in the predation of shorebirds nests with relation to climate change. The article by the six-member international team was part of his dissertation, which he defended in September at the Department of Ecology, at Charles University in Prague. 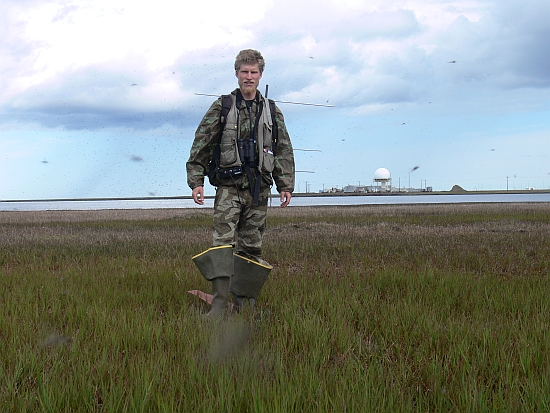 Many scientists go their entire lifetime without publishing in one of the most prestigious scientific journals. You were able to manage it practically at the start of your scientific career. Can you tell us a bit about the focus species of your research?

"As the title suggests, it’s about birds whose lives revolve predominantly around water environments. There are currently 245 recognized species of shorebirds also called waders. Throughout the history of ornithology, 52 species have been recorded in the Czech Republic, but most of these were just passing through. Overall, 8-12 species nest here, though some only rarely. As in the rest of Europe, the number of shorebirds here has declined significantly over recent decades. The most common shorebird in the Czech Republic is still the Northern Lapwing (Vanellus vanellus), followed by the Eurasian Woodcock (Scolopax rusticola) with its hidden way of life, and the Little Ringed Plover (Charadrius dubius). From a phylogenetic perspective, shorebirds are a more complicated group. Along with gulls, terns and auks, they comprise the order of Charadriiformes. For many years, however, it has been known that shorebirds, in the traditional sense, form a paraphyletic group, with certain members being more closely related to gulls and terns than other shorebirds. However, based on eco-morphological traits, we can consider them to be a single group, which is not a problem for most research."

Why did you choose shorebirds?

"Shorebirds are a unique group of birds for a number of reasons. For many years, I have been fascinated by their ability to inhabit diverse environments and migrate over great distances, as well as the variability of their mating systems and parental care. When investigating the level of predation, there is an advantage in the certain uniformity of nesting. Most shorebirds nest on the ground and generally lay four eggs, so the nests appear similar to potential predators. All over the world, scientists studying these birds are relatively uniform in the way how they visit nests and record the predation rate. In addition to my supervisor, Prof. Miroslav Šálek from the Czech University of Life Sciences in Prague, I also contacted an expert in comparative studies – Prof. Tamás Székely from the University of Bath, England, where I later did a six-month internship via Erasmus+ program. I began work in 2015, and since then have been intensively poring over available primary literature and gathering the suitable data. The work also includes data which I helped collect in the field, for example on the Northern Lapwing (Vanellus vanellus) in South Bohemia in the Czech Republic or the Red-necked Phalarope (Phalaropus lobatus) in Chukotka, Russia. After several years of intensive work and a great deal of luck, the article is coming out now in Science."

How much did the other authors contribute?

"I chose the topic myself and developed it with the other co-authors, especially my supervisors. The core trio was joined by Dr. Pavel Tomkovich, who helped with most of the data covering Russia. An absolutely essential member of the collective was Prof. Robert P. Freckleton from the University of Sheffield, England, an expert in spatio-temporal modeling on large ecological scales. Dr. Zsolt Végvári, from University of Debrecen in Hungary, obtained and prepared the necessary climate data for the monitored population of shorebirds. Each of the authors was indispensable in their own way for the final article to achieve its present form." 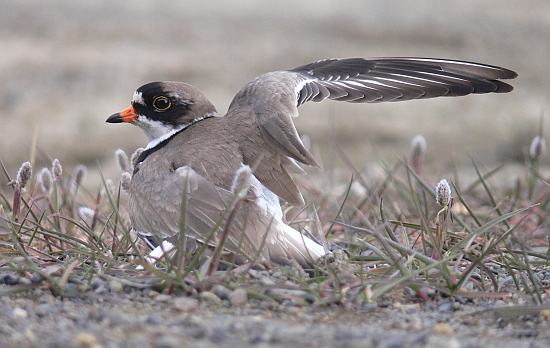 How big is the community of scientists studying shorebirds throughout the world?

"The “International Wader Study Group”, has roughly 500 members and mostly encompasses the European “shorebird” community, including scientists, environmentalists and banders, among others. The Americans affiliated in the “Western Hemisphere Shorebird Group” have a similar number of members. Worldwide there are about one thousand professional and competent amateur ornithologists whose research is primarily focused on shorebirds. In our country, I was able to revive the activities of the Czech Wader Study and Conservation Group 11 years ago, which is a work group of the Czech Society for Ornithology. Our group has 56 members, most of whom are amateur ornithologists. The largest group of people professionally dedicated to shorebirds is centered around Prof. Miroslav Šálek at Czech University of Life Sciences."

Your study works with an extensive set of data. What exactly is the data on and what methods did you use to process it?

"We were able to obtain mostly previously published data on 111 species of shorebirds in 237 populations at 149 locations on all continents, including Antarctica for our research. Overall, we used data obtained from monitoring of 38,191 nests. Each nest was exposed to predators for a varying number of days and the total period of the exposure of all nests represents an interval of more than thirteen centuries. For nest predation analysis, we used the Mayfield method, introduced back in 1961. The target variable is the daily nest predation, which nearly half the articles directly or indirectly reported. It was first necessary to check this information and carefully incorporate it. This wasn’t always possible directly, in such cases there was used a suitable conversion method to get the target variable."

What exactly does this key term mean?

Which species prey on the nests of shorebirds?

"Shorebirds don’t have specific predators tied to a particular species. On the contrary, most predators are opportunists who eat a mixed diet of rodents, for example, and of course bird eggs. In Artic areas, predators mainly include arctic foxes, weasels, skuas, gulls and ravens. In temperate zones, predators hunt primarily at night; these are mostly red foxes, martens, hedgehogs and again, members of the crow family. Towards the equator, we also see jackals and smaller predators, rodents become more significant (brown and black rats), with lizards (e.g. monitors), snakes, and even crabs preying upon the eggs of shorebirds. The higher diversity of predators in tropical areas probably contributes to the high level of predation there. In tropics, however, our knowledge of predation is significantly less comprehensive."

Can you briefly tell us about the results of your study?

"Our results show that as anticipated, there is a latitudinal gradient in the level of nest predation with the most intensive predation in the tropics and a declining level of predation in the temperate and polar areas. However, this trend was only apparent in the historical data set up to the year 2000. This trend currently remains the same in the southern hemisphere, but there have been fundamental changes in the North. These concern the temperate zone, but are most apparent in the Arctic, where there has been up to a three-fold increase in the daily nest predation. At present, nearly 70% of all shorebird nests are predated in Arctic, which represents a fundamental change and significant problem for shorebirds."

How do explain this change?

"There were known changes in the number of lemmings in the Arctic in around 2000. These rodents are the foundation of the food web here. As a result of more frequent temperature fluctuations, melting and refreezing snow cover, lemmings were unable to find food under the snow, leading to a collapse of cyclicity and a decline in the lemming populations in a number of areas. For Arctic predators, the nests of shorebirds represents an alternative prey and the level of their predation therefore increased with the decline in the number of lemmings. Before 2000, when lemmings were more numerous, shorebirds would have up to a one hundred percent hatching rate and virtually no predation every few years. The relatively low predation was one of the advantages of the long bird migration to the Arctic, which ensured a sufficient number of young individuals maintaing the global population. However, our results show that, in contrast, the Arctic nowadays represets an extensive ecological trap for migrating shorebirds from nest predation perspective."

Your analysis also examined the southern hemisphere. How does it compare with the north?

"The southern hemisphere differs from the north in many ways. For example, there is no major land mass in the temperate zone and we don’t find a mass of rodents analogous to the Arctic there. In recent decades, there have been no major changes in ecosystems like in the Arctic, so we do not see any major increase in nest predation in the southern hemisphere and the latitudinal gradient still matches historical data, with growing intensity of nest predation towards the equator."

Your research not only monitors the daily nest predation but also places this in context with climate data. What exactly does this correlation involve?

"We obtained data on trends in average annual temperature for 30 years before the last year of data collection at each location. One of the parameters of climate change was an increase in temperature over time, a second was temperature variability. These are factors of global warming and climate instability, which we then directly linked to the daily and total nest predation rates at the same locations."

What was the result of these correlations?

"It turns out that locations with the most marked global warming and higher degree of climate instability also showed the highest level of shorebird nest predation."

Does your study draw any conclusions that could be used for environmental protection?

"Our study is one of the first to show that climate change can impact inter-species relations on a global scale. This has numerous implications for conservationists. Generally, we can say that shorebirds are in a global decline. Of the 245 species, population trends are known for 192 species. We know that of these, 57% of shorebird species are in decline, 12% are increasing, while the other species have a stable population. For species that migrate to the Arctic – the trend is even more pronounced –higher percentage of these species is in decline. There’s not much we can do in the Arctic itself. Fencing nesting areas to keep out foxes would only protect a very small area." 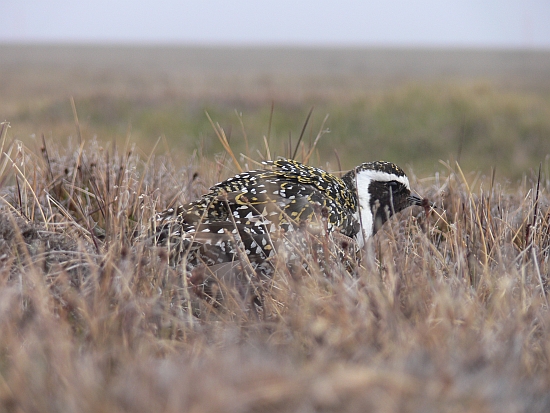 Does that mean there’s nothing we can do but sit back and watch?

"Not at all. Shorebirds have another major problem. The majority of species leave the Arctic in the winter, although there are also species that can stay in the southern part of the Arctic through the winter. Most spend the winter in temperate or tropical zones. These are mainly vast mudflats in the intertidal zone on the edge of continents, as well as inland wetlands or grasslands in the interior. In Europe, traditional wintering sites are intertidal zones in the southern and western part of the continent, where is a milder ocean climate and plentiful food. Because of the destruction of suitable stopovers on the migration route, especially intertidal zones, the survival rate of adults is dropping, and given the high level of nest predation these birds are in a double bind. This is a fundamental problem, especially for the East Asian – Australian migration flyway, particularly in China and Korea. Protecting these fast-disappearing stopover sites can, in my opinion, do the most to support the global population of many shorebird species at present."

Author: Michal Andrle
back to top