Between Two Ages is the sub-caption of a new exhibition which opened at Charles University on Wednesday marking the reign of Czech King Wenceslas IV, on the 600th anniversary of his death, a monarch who bridged the period of prosperity under his father, Charles IV, and religious and social upheaval which followed. 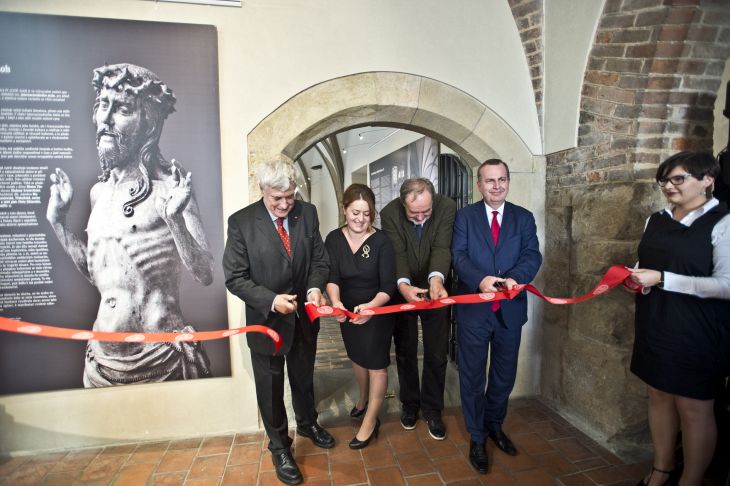 Wenceslas IV’s legacy has often been judged harshly when compared to his father’s: one of the aims of the exhibition, on at the Carolinum, is to show him in a fairer light as a king and supporter of the arts, who ruled for more than 40 years at a time when others’ hold on power was relatively short-lived.

At the opening, Vice-Rector Jan Royt told a packed room that – in effect – the king had gotten a bit of a bad rap.

“Wenceslas IV was often criticised in history as a drunken king, as someone deeply in the shadow of his father but we need to treat him a little more fairly. He was born into – and ruled over – a ‘different’ Europe, a period of uncertainty when Europe was hit by the plague, which saw the sudden death of Charles V of France (whose son and successor would be known as ‘The Mad’), a period of murderous competition among dukes.

“After 1400, you had three popes, there was the demise of King Richard II of England (the husband of Anne of Bohemia)… We have a lot to remember Wenceslas IV for, not least that he was a significant donor or patron of the arts who supported architectural and religious works in International Gothic (or in Bohemia, the Beautiful style). For these contributions alone, his legacy should be assured.”

Not surprisingly, International Gothic style features richly in the exhibition: there is a copy of the Wenceslas IV Bible, a medieval codex with more than 650 illustrations. There are technical copies of glorious period paintings by the Master of the Třeboň Altarpiece and others (the subject of which was often Madonna with Child) - which should not be missed. Sculptural works are also featured, as are technical copies of the monarch’s crown.

The venue, the Carolinum, is itself a stop on most Prague walking tours and many newcomers will be fascinated to learn than none other than Wenceslas IV donated the building to what is now Charles University, either in 1383 or 1387, according to estimates. As such, the Carolinum remains one of the oldest functioning or actively used university buildings in the world, Charles University’s Rector Tomáš Zima confirmed. According to Zima, only the church at Oxford, now a university café, and a building at the University of Bologna, also in use, are older.

Visitors to King Wenceslas IV – Between Two Ages interested in lost sites or works of architecture as they appeared in Wenceslas IV’s day, can also look forward to viewing architectural 3-D models of past cathedrals or churches – some of which no longer exist.

The models were designed and produced by students from the Czech Technical University in Prague; on Wednesday, they proved to be arguably the biggest draw for some visiting children, whose parents no doubt had trouble tearing them away. Some of the little figures made to scale - representing commoners or believers or clergy from the time of Wenceslas IV - were themselves torn off, as kids were anxious to move them around some of the magnificent little buildings at hand.

King Wenceslas IV – Between Two Ages - is open daily at the Carolinum between 10 am and 6 pm. The exhibition lasts until November 16, 2019. Admission is free.

View the embedded image gallery online at:
https://www.ukforum.cz/en/main-categories/news/7518-new-exhibition-marks-wenceslas-iv-s-legacy#sigProId1aaa5a9c89
back to top