The mystery of the stained glass windows

The Church of St. Bartholomew in Kolín is a national cultural monument and for a good reason. It is one of the most impressive examples of Gothic architecture in all of Central Bohemia. Among the church’s many gems are extraordinary stained glass windows, which caught Anna Bartoňová’s attention. A student at the Catholic Theological Faculty of Charles University, Bartoňová researched the church’s long history and – in the process – contributed to an interesting discovery. 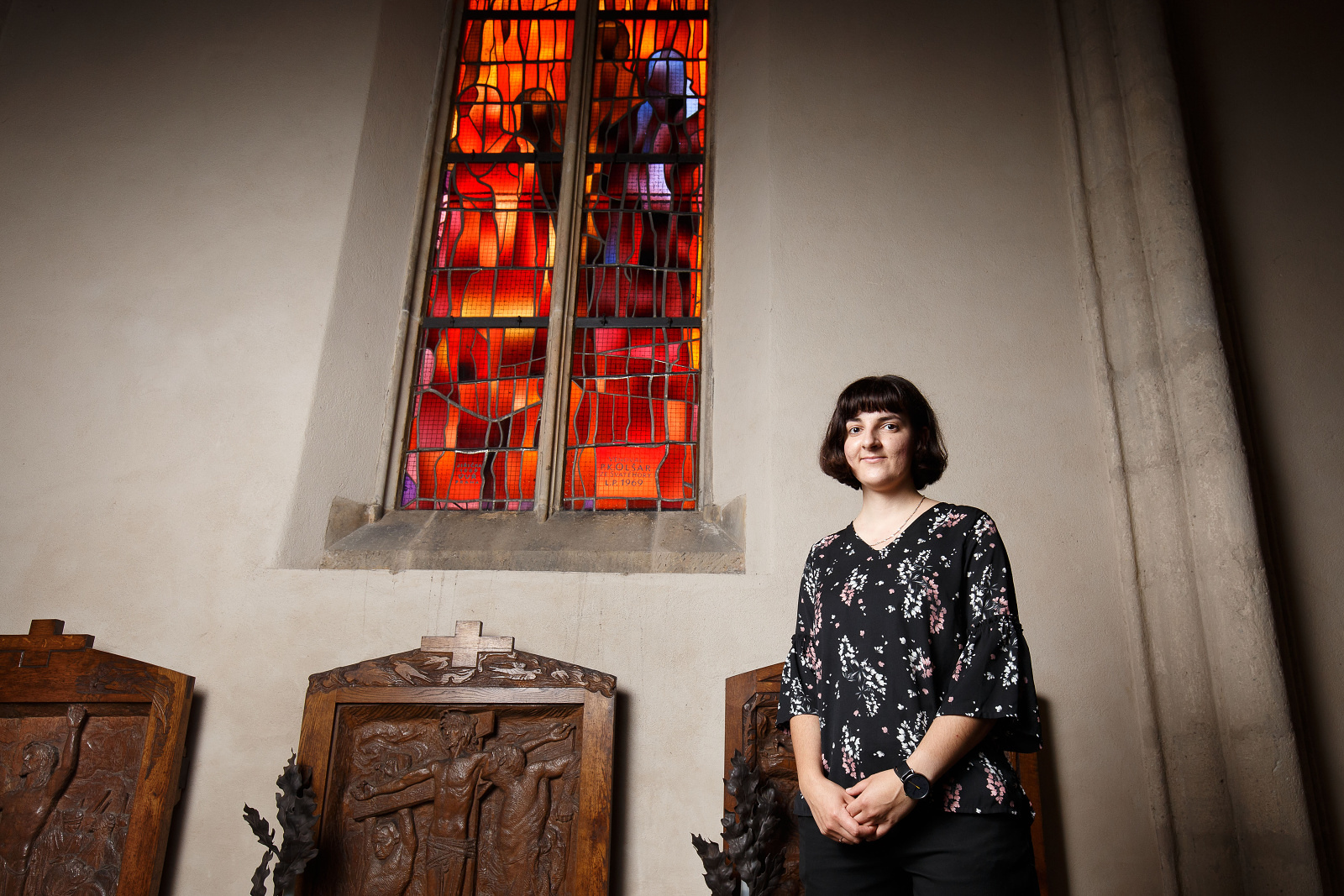 The Church of St. Bartholomew in Kolín is a national cultural monument and for a good reason. Architecturally, it is one of the most impressive examples of Gothic architecture in all of Central Bohemia. Among the church’s many gems are extraordinary stained glass windows, which caught Anna Bartoňová’s attention. A student at the Catholic Theological Faculty of Charles University, Bartoňová researched the church’s long history and – in the process – contributed to an interesting discovery.

The founder of the famous church was Czech King Přemysl Otakar II, shortly after the founding of the city of Kolín in the second half of the 13th century. After a devastating fire in 1349, his great-grandson, King Charles IV ordered the church’s reconstruction, commissioning the prominent Gothic architect Peter Parléř for the task. In 1380, the church received unique Gothic stained glass windows, which would remain untouched for more than 500 years. The glass survived fires, attacks during military campaigns, as well as unpredictable weather over the years.

World War II and the fear of air raids and bombing, put an end to that: the local decanate decided in February 1944 for the Gothic panes to be removed from their frames and replaced with plain glass. This proved to be a shrewd step, after an Allied air raid on 15 March 1945, saw two bombs hit the decanate office building as well as St. Bartholomew's Church: the pressure wave knocked out the windows on the church’s north side.

The removal of the historic panes however led to ownership disputes: Kolín‘s decanate claimed the Gothic stained glass windows as their own, the local museum wanted the windows and the Municipal National Committee (MNV) also wanted to appropriate the historic stained glass as the windows had been stored in the cellar of the town hall at the end of the war. It was not until 1960 that the matter was resolved and the church’s ownership of the windows recognised. All the same, the decanate asked the artistic glazier Jiřička glassworks to restore the Gothic windows and to create new stained glass windows to replace the ordinary glass that had been temporarily used.

New modern stained glass windows were installed during the 1960s-1980s. Student Anna Bartoňová was so intrigued that she made their study the topic of her bachelor's thesis at the Catholic Theological Faculty of Charles University.

“Originally, I wanted to write about modern religious buildings, with the main idea being the contrast of darkness and light. When I was a kid, I couldn't figure out how it was possible that stained glass windows look so sad from the outside, but as soon as you entered the church, they glow and shine so amazingly. It's like there's a rainbow of colour everywhere in the church. And gradually I got to the stained glass windows in Kolín,” Anna told Forum in the vicinity of St. Bartholomew’s.

She learned about them thanks to her great-grandparents, whom she often visited in Kolín at the holidays. 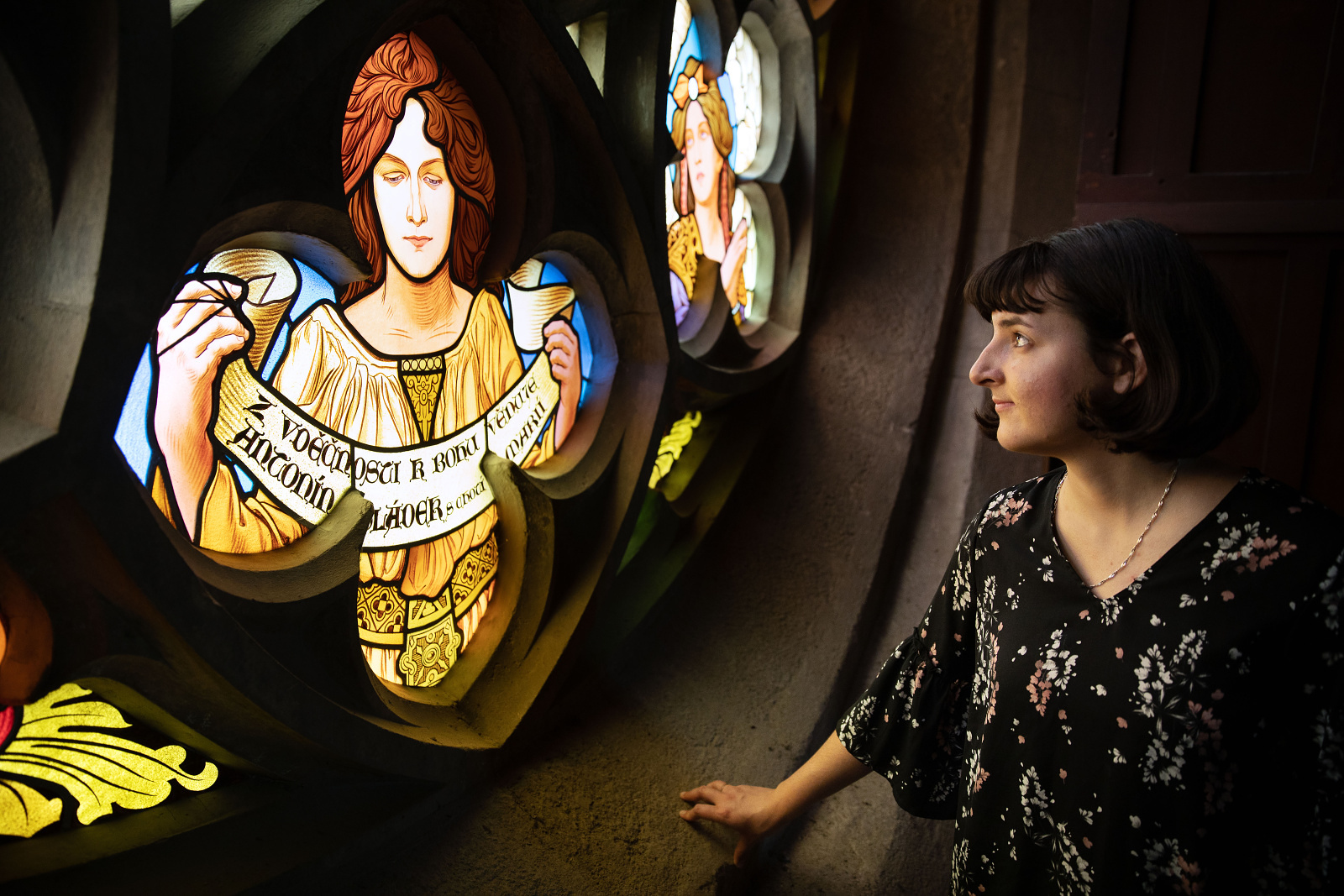 In Kolín, the Bachelor’s student was impressed by how seamlessly the stained glass was incorporated into the Gothic building. “The basic idea of the Gothic style was maintained: verticality, the direction upwards towards heaven, towards God - has remained in the modern stained glass windows. In the lower parts, the authors stuck to shades of dark, heavy colours, we can say almost the colours of hell and the underworld, which, through the impression of a stream, gush upwards, where they turn into light, hopeful, heavenly colours,” Anna explains.

In addition to modern stained glass windows, St. Bartholomew’s also has ornate windows from the Gothic period, and beautiful Art Nouveau stained glass from the 19th century, yet Anna prefers the newest additions - the modern ones – and not only because of her research. “I like it when I can think more about the modern abstract scenes, where the message is not as obvious as in the figurative ones,” she smiles.

“Originally, the stained glass windows mainly depicted biblical scenes… There was also definitely the idea of a kind of power of God, with light permeating the stained glass in a certain way. She highlights the work of the craftsmen from the Jiřička glassworks, which is still operating in Prague today. In the past, the firm was involved in the production or reconstruction of many important stained glass windows, including those at St. Vitus’ Cathedral for Max Švabinský.

But what happened, you must be wondering, to the original Gothic stained glass windows, preserved at the end of the Second World War? After they were cut out of the windows in February 1944, they were documented, packed and placed in a box that was secretly stored in the basement of the town hall. After the war, the crate was moved to a Czech savings bank vault and in 1948 the glass from the windows was placed in the numismatic collections room of the Kolín Museum.

In the 1960s, the windows came under the trained eye of stained glass expert Ludvík Losos, who collaborated with Josef Jiřička, jr., in the glass workshop U Milosrdných in Prague 1. Two of the windows (Death of the Virgin Mary and Crucifixion) are now housed at the National Gallery Prague in the St. Agnes Monastery, while the other two are stored in the depository of the Archbishopric of Prague. 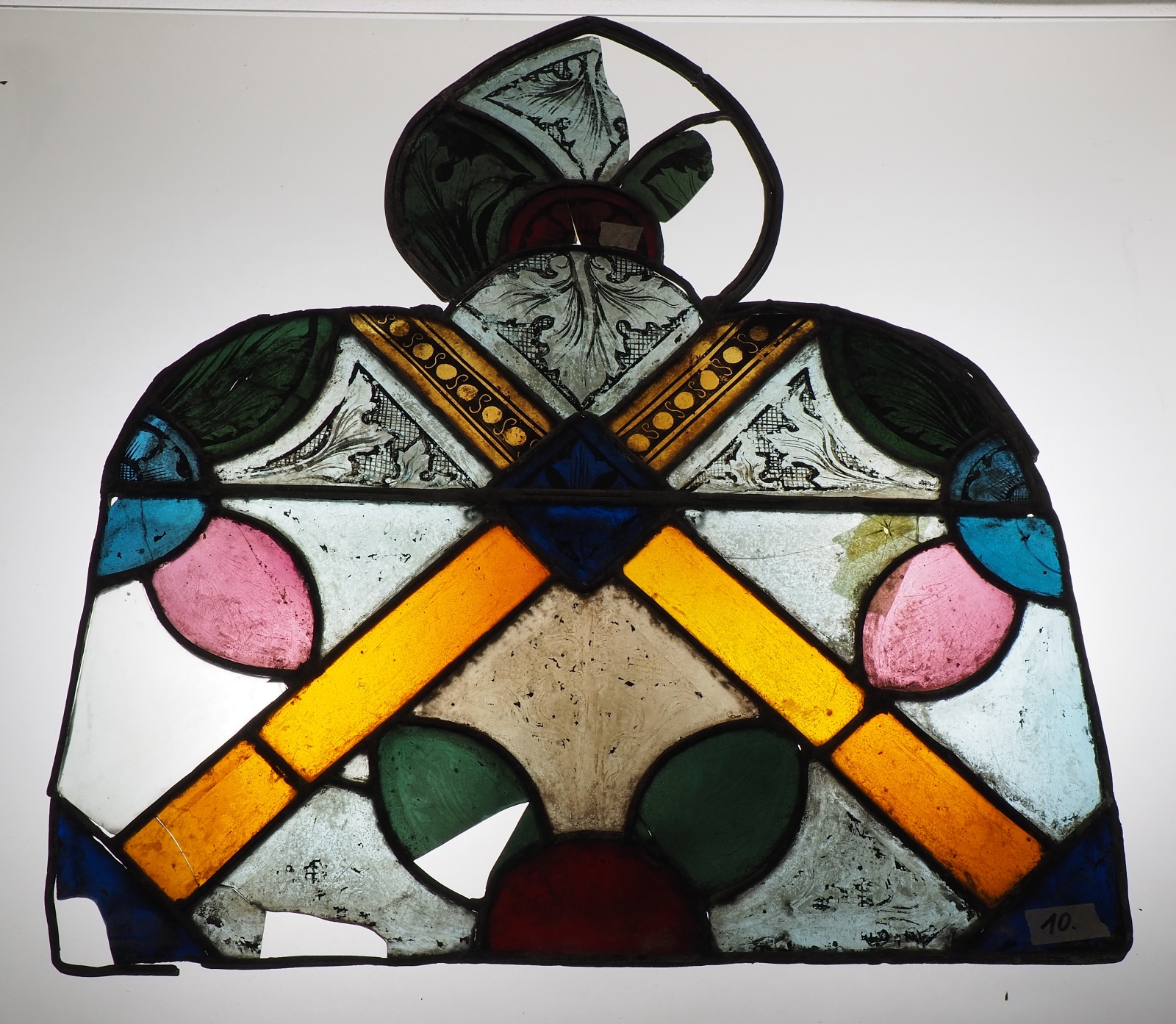 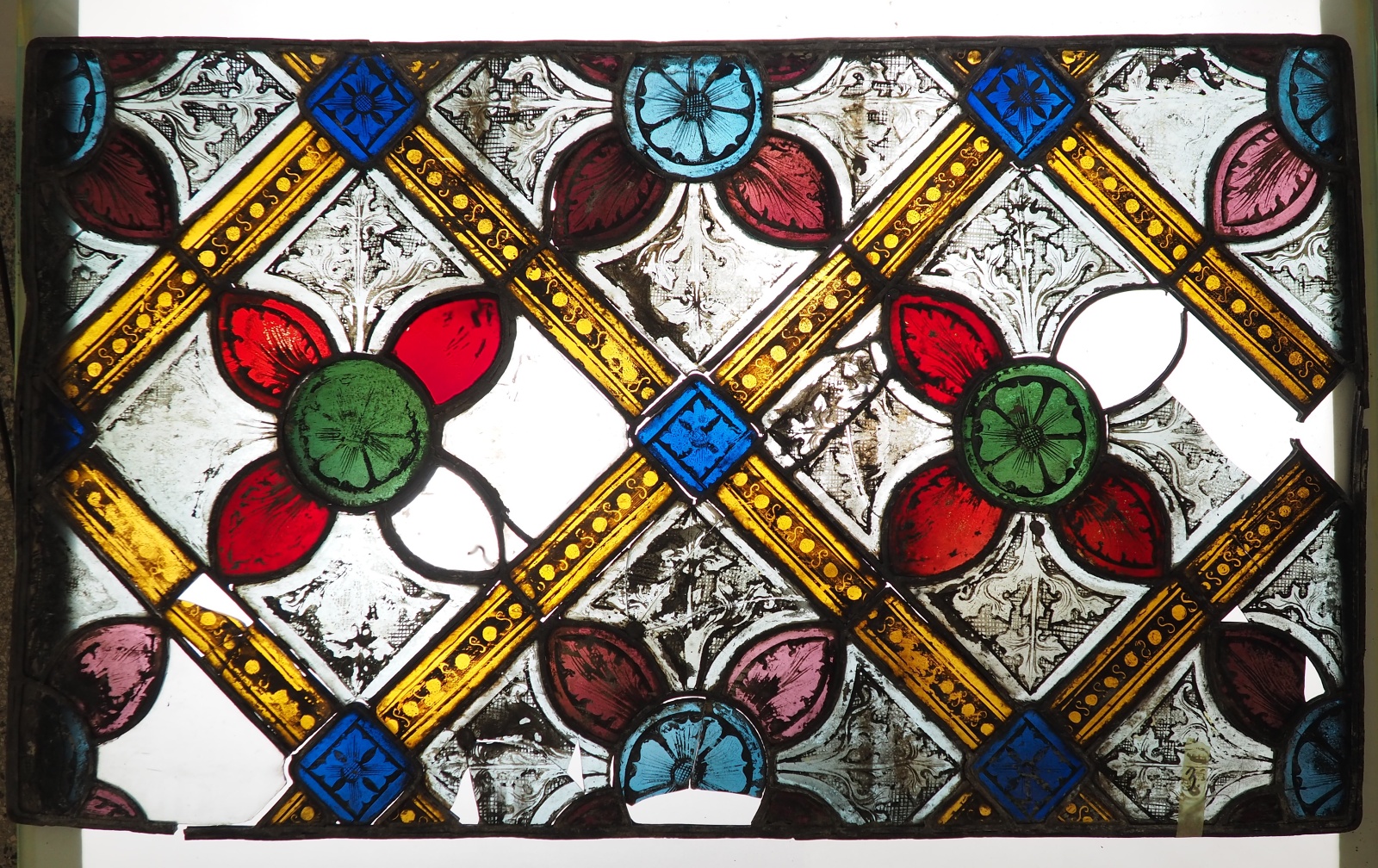 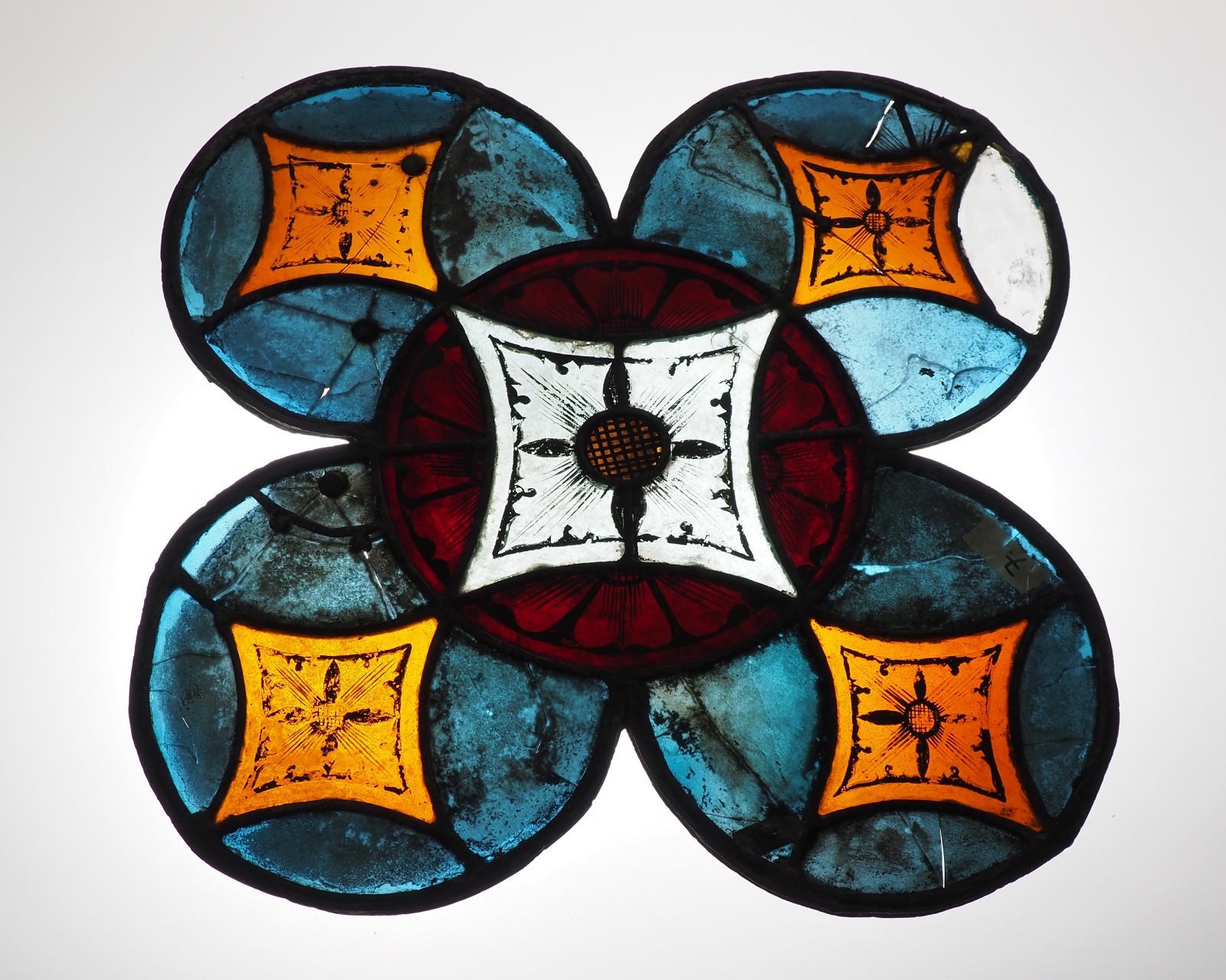 “Of course, we have always known about the stained glass windows in the museum's collections, but unfortunately the collection has not been properly identified and dated. It was only Miss Bartoňová’s research interest that initiated a closer expert examination,” adds Rišlink, who granted the student access to verify the contents of the “forgotten” box. Anna submitted a photograph of one of the removed pieces of glass from the box to Ludvík Losos, who restored Kolín’s stained glass windows until 1973, and he confirmed that these were the forgotten components of the damaged Gothic stained glass windows. “This is most likely the largest preserved set of Gothic stained glass in the Czech Republic. We have now commissioned a restoration plan and in the future the set should be displayed in the museum's permanent exhibition,” Rišlink adds.

Anna, who was attracted to the arts in grammar school, thus played and continues to play an important part in the history and revival of the Kolín church. After graduating from high school, she considered studying at a purely artistic school, but in the end she decided to study History of Christian Art at the Catholic Theological Faculty of Charles University. 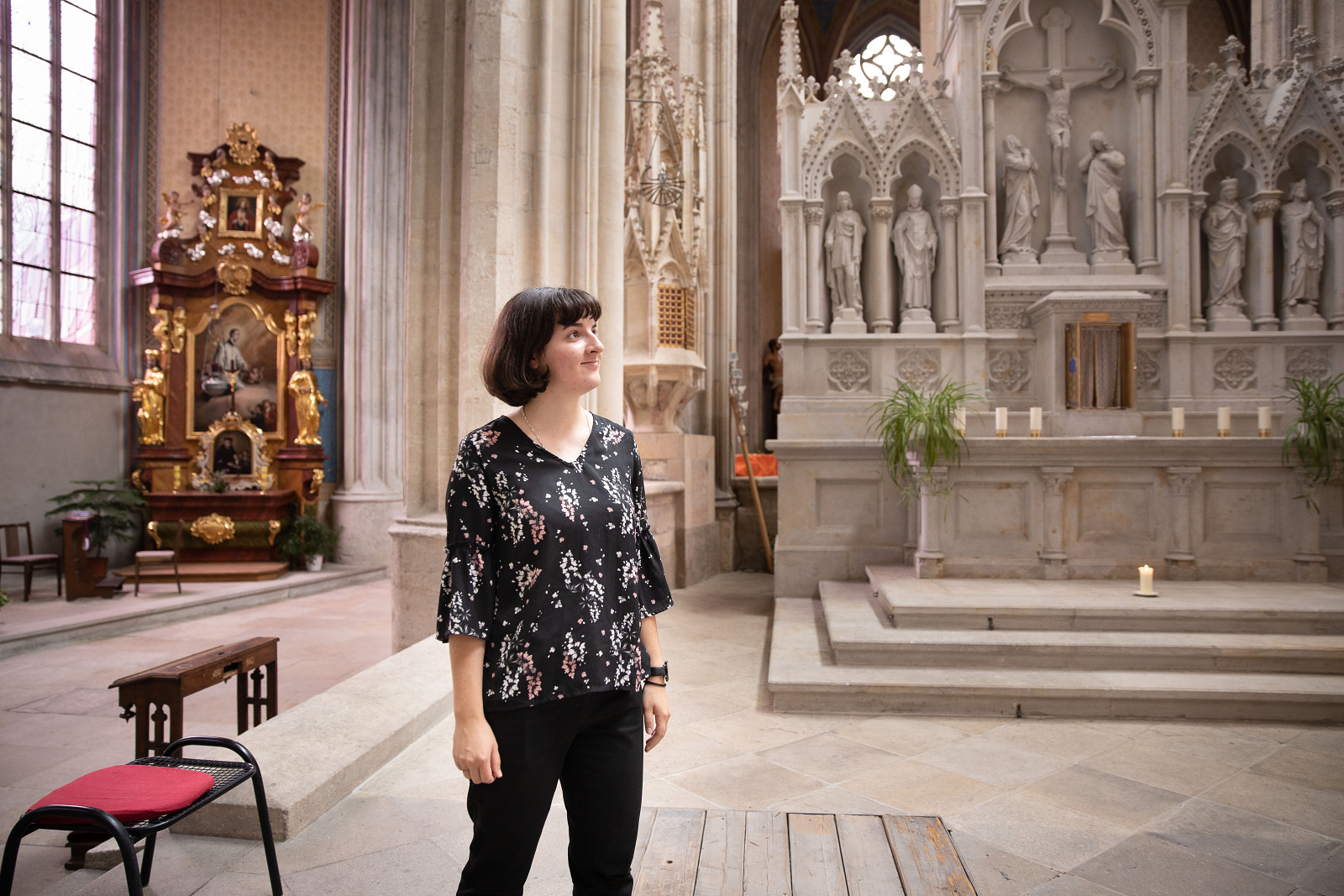 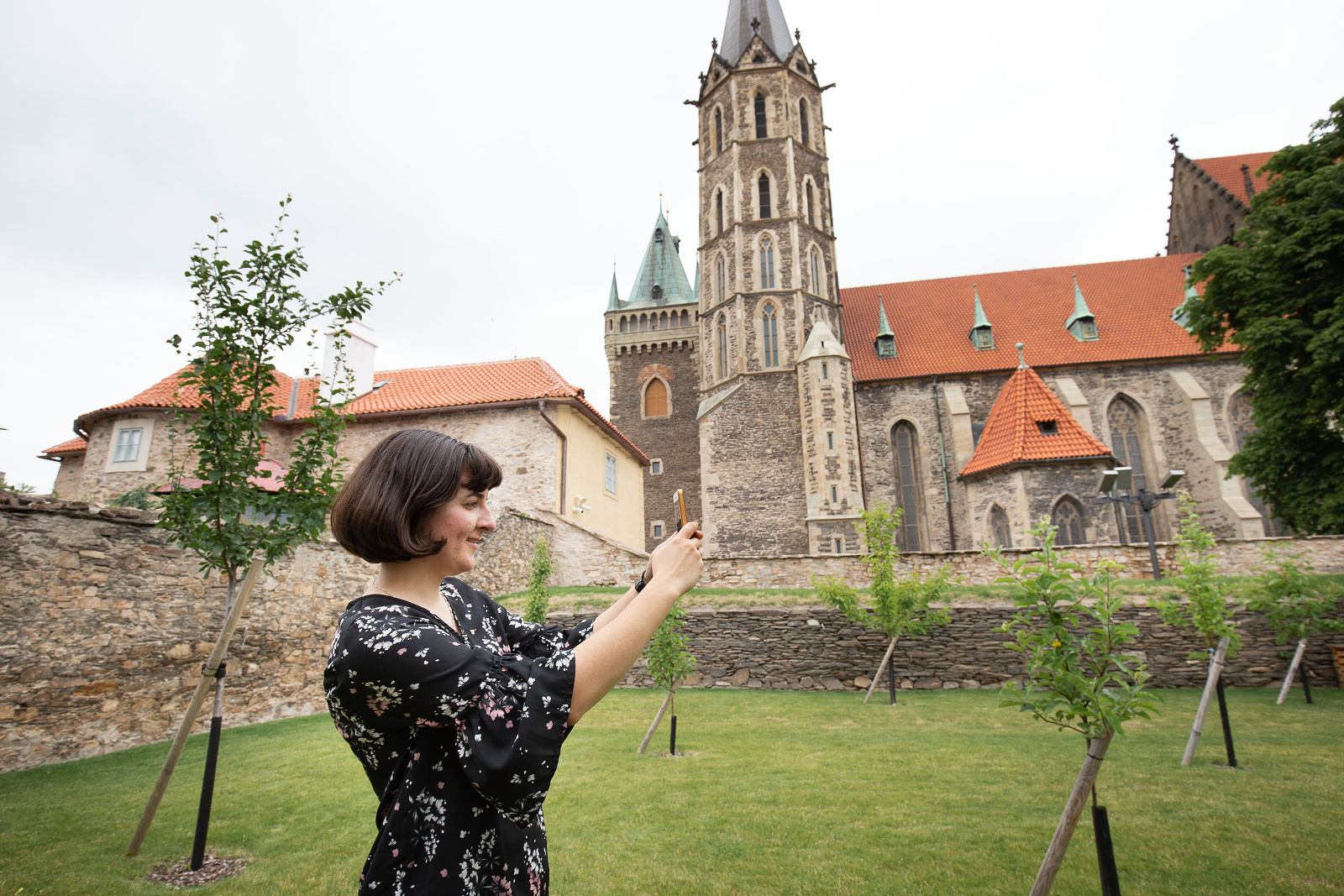 “I'm fascinated by how art is woven completely into society and is basically all around us. I enjoy architecture the most. Before I started university I went to an exhibition at the Fragner Gallery in Prague, which was an exhibition about modern sacred art, and it really grabbed me by the heart. I liked how you can work with simple architecture. The artists presented in the exhibition were not concerned with over-decorating unnecessarily, but they were mainly concerned with making the spaces more contemplative and more aware of who God is, who we are... It is only in such a simpler environment that one can better figure it out for oneself,” Anna concludes. 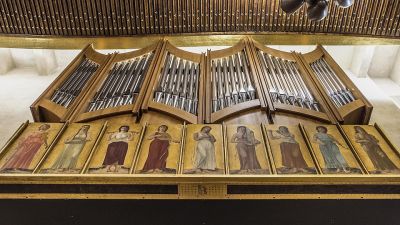 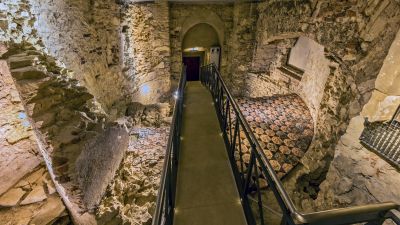 Ancient rotunda - A gem at the Faculty of Math and Physics 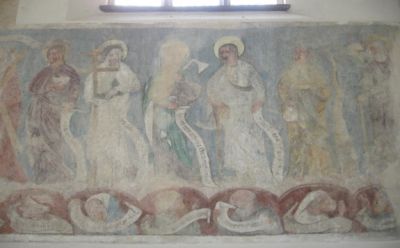