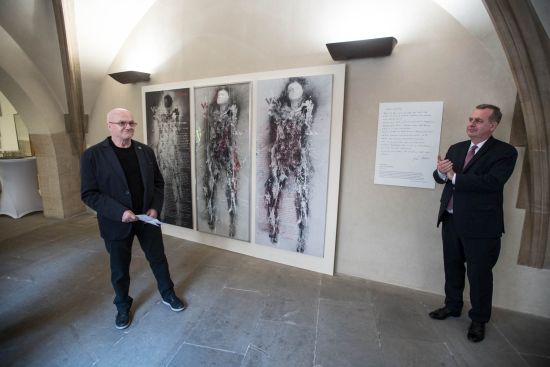 A triptych by Czech artist Jiří Sozenský, commemorating the sacrifice of student Jan Palach (who died at the age of 20 from severe burns from self-immolation in January 1969), was unveiled on April 4 at Charles University’s Carolinum.

The installation was inspired by Palach’s sacrifice (he had hoped to rouse fellow citizens in Czechoslovakia from apathy and resignation half a year after the Soviet-led invasion that crushed the Prague Spring). Entitled Povznesení (translatable as Ennoblement), the donated work is a permanent installation in the heart of Charles University. It is installed not far from where the student’s coffin originally lay, where mourners paid their respects in 1969.

Speaking at the April 4th unveiling, artist Jiří Sozenský described the impact Palach’s drastic deed had had on him as a student. He said initially he lost the motivation to continue studies at Prague’s Academy of Fine Arts, but a meeting with sculptor Olbram Zoubek, who cast Palach’s death mask which itself forms a motif within the triptych, proved fateful (proving it was possible to remain true to one’s convictions and not cave under pressure from the regime).

Still, Mr Sozenský said it never would have occurred to him then that he would one day incorporate the death mask into his work; at the time he wouldn’t have even dared to so much as touch it, he said. It wasn’t until 2007 that the artist decided to include the mask in his Povznesení series. 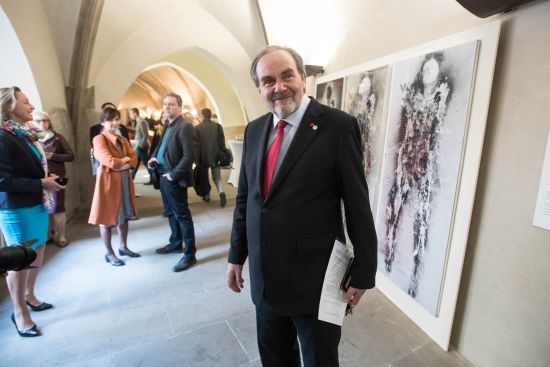 At the launch, CU Vice Rector Jan Royt described the work as strong and "modern in its expressiveness" with an ability to speak to younger generations and to provide a glimpse into human suffering.

Earlier this year, on the 50th anniversary of Palach’s deed which shocked the nation in 1969, a commemorative tile was unveiled in the courtyard at the Carolinum where visitors were able to lay flowers and to reflect on his legacy.