The Coimbra Group Annual Conference began on Wednesday, this year hosted by Charles University. It was hoped initially that conditions would allow members to meet in person, but the pandemic meant that plans for even a hybrid meeting had to be scrapped. Unlike last year, when the pandemic first hit, this year organisers were able to ensure key meetings and missions would be thoroughly discussed, albeit online. The Coimbra Group brings together 41 universities from 23 countries.

Among the main topics are sustainability, post-pandemic cooperation, and help for students moving forward whose education and futures were impacted by the crisis. 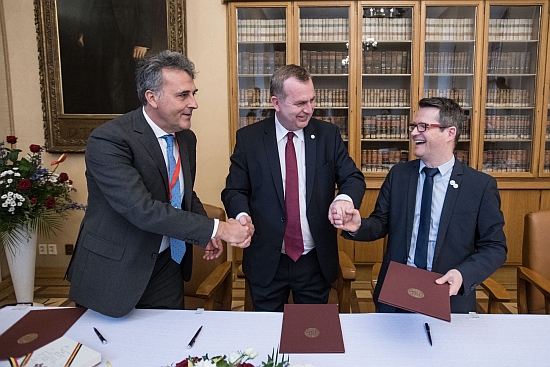 I spoke to Professor Ludovic Thilly, the chair of the Coimbra Group, asking how the association had weathered the last year and a half.

The annual meetings are very important in the life of the network in normal times, an opportunity for all the participants, work groups, the rectors, executive board members, everyone within the Coimbra Group family, to gather and meet at one of the member universities over the course of four of five days. We have all kinds of meetings over the course of the year but this one is the big family one. (In the photo: Professor Thilly is on the right, next to Rector Zima, at Charles University in 2018).

Last year, was very frustrating because we had to cancel at the very last minute the annual meeting which was to have been held at Montpellier. The University of Montpellier was marking its 800th anniversary, which was very important for the school and for us. But the pandemic had begun hitting Europe and due to the last minute cancellation we could only hold the general assembly online to meet basic requirements of the association such as budget and very practical matters.

At that time, we all hoped that the next host, Charles University in Prague, would be able to hold the event in person once more, but even though things are improving in Europe – not everywhere in the world – we took the decision again to hold the event online. The dynamics of the pandemic just were not favourable. It’s frustrating because we also know that Charles University Rector Tomáš Zima is coming to the end of his final term as head of the school and was committed to receiving us in person. 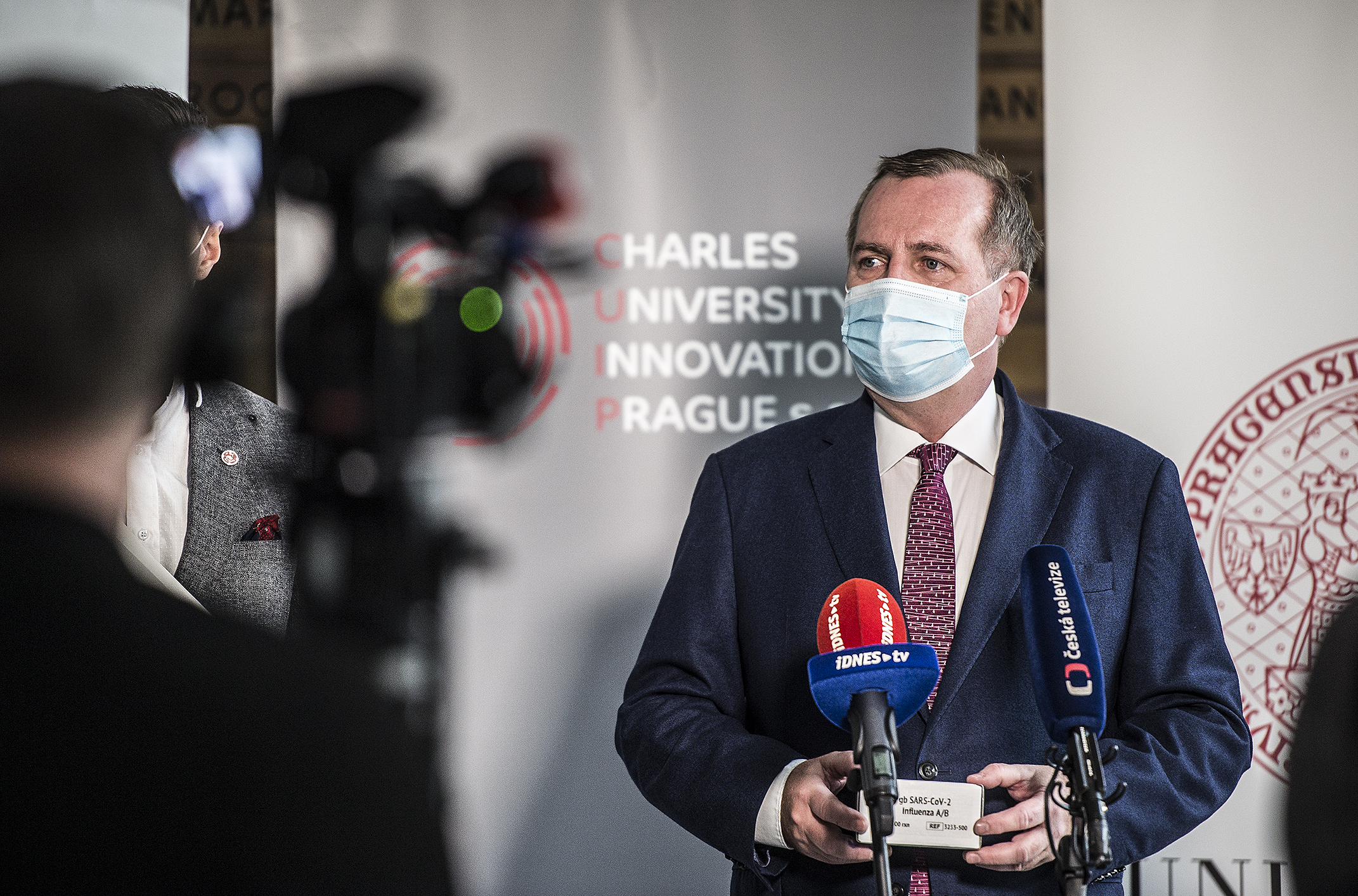 On the plus side, the difference is that we had the time to see things coming and after, initially preparing a hybrid model we were able to arrange everything online and that we could maintain all the planned meetings. Instead of physically meeting in Prague, we were able to organise all of the events [along with the main conference] over three weeks. That is better for the organisers as well as participants, who by now all know “zoom fatigue”. While we would have been so happy to be in Prague – I myself have visited many times and was very much looking forward to it – at least we could cover all the meetings we needed online.

All of the different universities within the Coimbra Group grappled over how to deal with restrictions and how to adapt, haven’t they?

That’s one of the lessons learned. We managed. Of course, during the first weeks and months, many activities were frozen but quite rapidly last June and July we could see all the working groups had all switched online, just like all research at universities continued, and universities showed an incredible resilience and capacity to react. We witnessed the same and in contrary to what we were maybe afraid of, we maintained our network activities and some even increased! Because less travelling meant more time to allocate for such activities and in the end the global balance was positive. It’s strange to say this because on the other side was the absolute traumatic impact on people, families, with the number of deaths, but in terms of network activities on their own, these restarted and flourished because we adapted. The annual meeting, as a result, has been completely transformed online without diminishing the quality.

It’s a tough question in the sense that all missions within the universities are equally important but today we had a meeting of the Rector’s Advisory Group, of which Rector Zima is a member, where we have a small number of rectors who advise the executive board, and in the introductory remarks from the current honorary president of the University of Montpellier Anne Fraïsse she exactly said that we have to maintain our missions, etcetera. But the new period, the new experience shows that we also have to take care of people, not just the missions, and include the students. Because they have been severely impacted by the pandemic and maybe lost something they had before, which is faith in the future. Suddenly there is a kind of “stop” on the horizon because of the pandemic they never had before. They have not only been impacted in their way of life but also that they don’t really see what the future holds now. 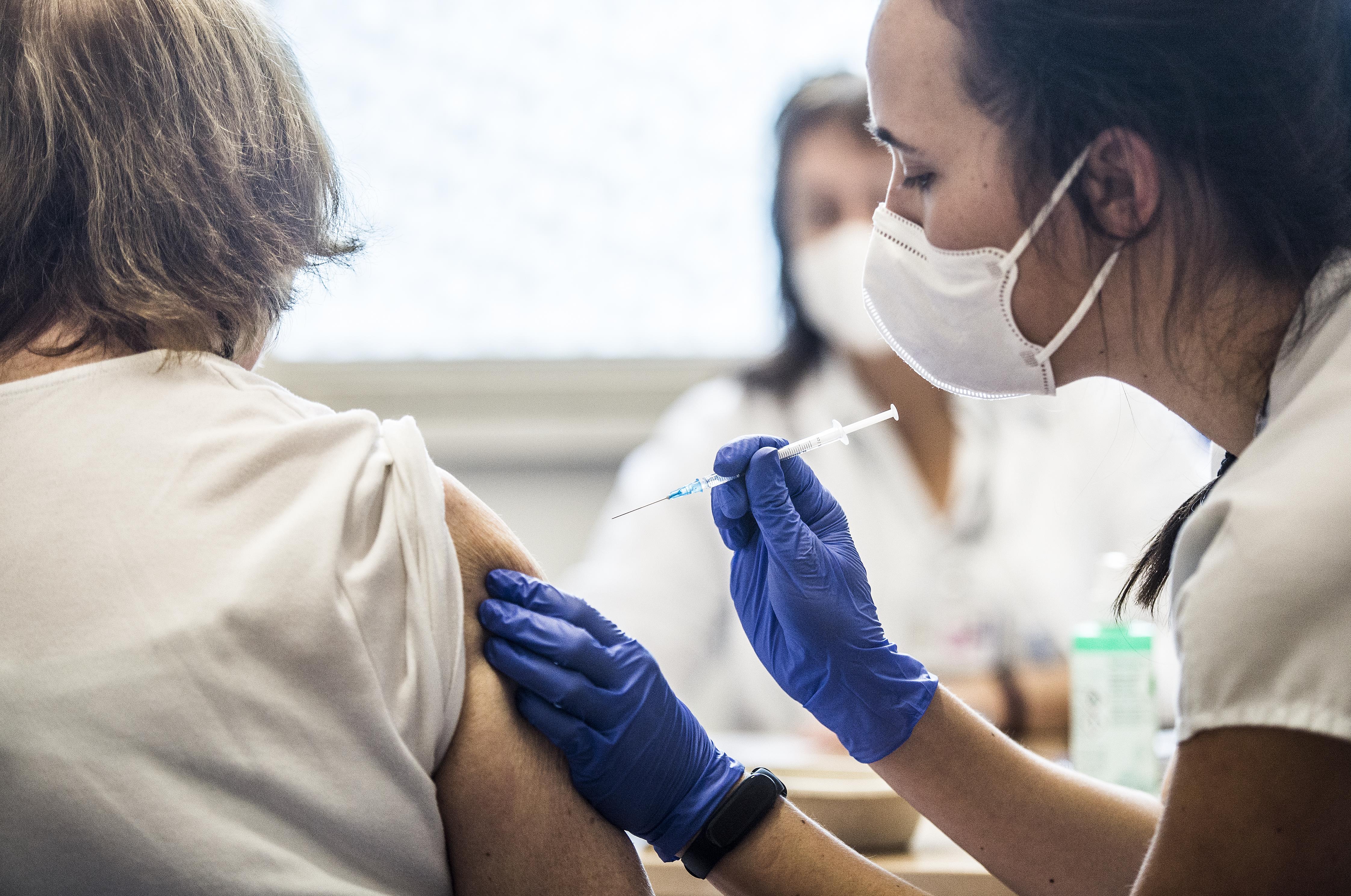 Mobility was of course affected...

Already now we know that the mobility of students will never be the same. In particular, there is a strong commitment to be more green, using trains not planes, this is really strong. But we have seen also that we can limit the number of physical meetings because we can also continue to work online. At universities, we will see more and more blended mobility, more and more blending teaching and learning, so we can clearly see that there will be a “before and after” but we need to know especially what will come after. For that we are currently consulting all of our members. So at the annual meeting we are covering all of the usual missions but there will be a sort of red line which runs through everything which is related to Covid-19. So we really need to take care of them and I think we have another responsibility that needs to be taken care of. I think it is very much at the forefront of discussions this year and I should add we had already started in this direction. Last year, within three weeks we collected from all members of the group data on the response to the crisis. We published out first Coimbra Group report on the impact of the pandemic and it had a strong impact on many levels including the level of the European Commission. And they consulted us to see how universities could really help societies be resilient, in connection with The Next Generation EU fund [Editor’s note: The EU’s recovery package to support member states hit by the Covid-19 pandemic]. What we are doing now, just launched last week, is a new survey on the potential long-term effects, to see how existing university missions may or may not be affected.

It’s interesting because we have gotten used to online communication and maybe it will more and more mixed; at the same time, there is a hunger for personal contact again once it will be safe. So maybe there will not be as many visits, but maybe we will also appreciate more when those visits happen.

You mentioned the renewed emphasis on going green: that leads nicely into the main topic of this year’s online meeting, which is sustainability. Are there other examples where you are thinking about that?

We started in this direction already before the pandemic but is even more relevant now. The idea of sustainability is manifold: the initial input was that all of our universities in research are very much engaged in finding solutions to current global challenges and global society and we thought about how we could approach this. We realised that United Nations SDGs (Sustainable Development Goals) recognised internationally could help. From that first reflection point, we began to prepare a series of events that would address the SDGs, looking at sustainability in all its dimensions.

I mean by that political and financial aspects as well as the nature of the threats themselves: the climate, water, education, and so on. This how the topic which we will be looking at, at the annual conference tomorrow emerged in importance. SDG 16 deals with multilevel governance and this one is important for us. A sustainable university in the 21st century has developed this kind of governance, meaning internally, that whole communities are involved: the professors, the staff and the students. That they be deeply involved in decisions. That’s the internal one.

Externally, the Coimbra Group has put forward an initiative that was launched in 2016 in Poitiers which is called the Poitiers Declaration. The initial topic was The University & the City. And we put together a framework whereby Coimbra Group members were asked to join in the commitment to promote joint-governance with municipalities on common topics such as education, the promotion of sciences, that research outcomes lead to the creation of local companies, that there is transportation for students. This declaration has become quite popular and now 33 of the 41 universities that got on board signed this with municipalities. This a clear example of multilevel governance. You start with the local, then the national, European and – why not – international. That was very meaningful for us because our members are longstanding universities that were created centuries ago and they have a very special synergy with local policy makers. It was very much in line to make this a topic at the annual meeting.

If we continue in this vein, we have organised a meeting next October 21 and 22, a high level seminar in Geneva in cooperation with the University of Geneva, which has strong ties to Charles University, and the reason is because they are next to the United Nations European headquarters. We will actually meet at the Palais des Nations and the rectors will have direct interaction with UN policy makers and we want to create a debate whereby the SDGs can be implemented at universities, but also understanding this is not a static process and to always be up to date on the latest developments and challenges. That is where we will go next after this week’s meeting. We are now starting a journey where sustainability, in all its dimensions, becomes one of the core topics of the group. 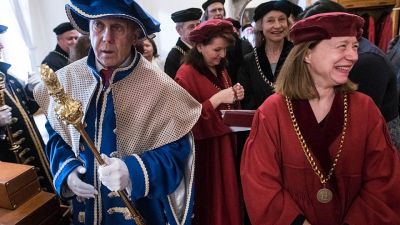 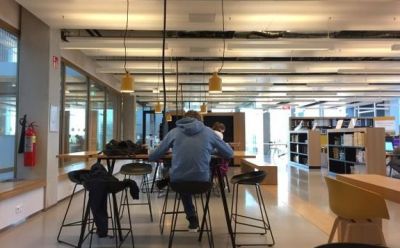 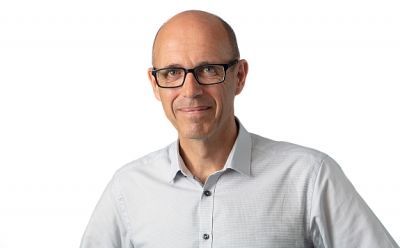