“Research cannot be fully planned and you never know what you will discover”, says the Creativity Award recipient, assistant professor Martin Čížek from the Charles University Faculty of Mathematics and Physics, the co-author of a paper published in the prestigious journal Science. The theoretical physicist, whose calculations influenced the models of the formation of first nebulas and starts after the Big Bang, is a fan of the Big Bang Theory TV show.

When did you start to focus on collisions of electrons?

During the research for my dissertation, I collaborated with Professor Jiří Horáček, who was then coming up with a new theory to describe collisions of electrons and molecules. The electron is a very light particle and when it crashes into a molecule, it would seem that it can do nothing to it. Professor Horáček would say that it’s like a ping pong ball hitting a tank: the ball bounces back and the tank remains unharmed. But this description is not completely accurate. The molecule is only held together by other electrons, so given that the electron lingers for some time in the vicinity of the molecule, it can violate the molecule’s force field and cause it to vibrate or even destroy it. 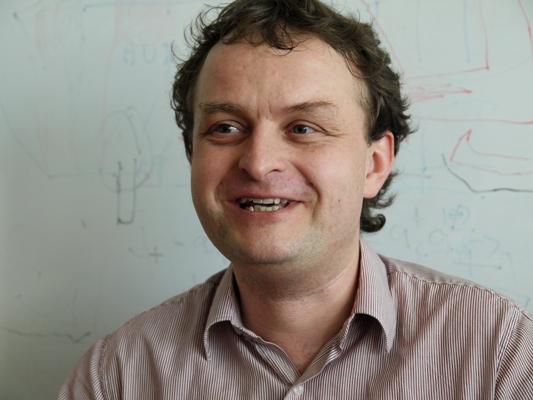 How did you find out that the formation of molecules and that of giant stars are interconnected?

At the beginning, the space was very hot and the atoms did not hold together, but when it cooled down, the electron could get caught by a proton. At that point, there wasn’t much more than hydrogen, helium and traces of lithium. Only when the molecules were allowed to form, the gas would condensate on a large scale and form stars. We have shown that these two processes, although different in size, are interconnected. One would not expect that the formation of molecules and giant stars have so much in common.

Astronomers have been interested in the reaction due to the fact that the most frequent element to fly about in the space is hydrogen. We published our paper in 1998, but astronomers kept using older models. About five years ago, Daniel Savin visited us from New York and said that the variance among the curves is high and that our value was the highest, only to be followed by experimental and theoretical ones. During his visit, I was trying to convince him that my calculations were sound. Descriptions of a process like this tend to have many variable parameters, but our calculation is based on first principles – the only variable parts are approximations. And those are needed even if you don’t include any model in the calculation and only use the laws of nature. I tried to convince Professor Savin that the approximations we are including do not affect the basic quantity he is interested in. He eventually decided to design a new experiment that would test the reaction. Previous experiments had been conducted in room temperature and he decided to measure the reaction for different values of the energy of the collision, because that’s what astronomers need when modelling star and galaxy formation in the early space. He designed a new experiment, measured the data again and the curve turned out to match our calculations. That was a huge success for us.

It the early stages of the history of space, the first particles to emerge were atoms. The process calculated by us and tested by Professor Savin led to the formation of molecules. The fact that the results are three times bigger than people had thought changed the way we create the models of formation of early stars. This is why we got into Science. It was a result of three teams working together – our theoretical team that provided some data calculations and a team of astrophysicists did some more calculations of how this affects the formation of early stars. The whole operation was much faster that we had expected.

What line of research are you focusing on now?

These days, I work in two main areas, the first of them still being molecules. It is very difficult to calculate diatomic molecules, but there some interesting effects going on in bigger molecules and we would like to extend our calculations to them, too. For example, collisions of slow electrons into molecules are the main source of damage to biomolecules during the exposure of tissue to ionizing radiation. The other area, which I started to get into during my research stay in Munich, is molecular electronics.

It’s been over ten years since we first plugged a molecule into an electric circuit. You can take a molecule and run current through it and observe the changes in the current depending on the changes in voltage. The resulting curves are very complex and we can try to explain them. To me, it’s interesting, because it’s related to my previous work – the flow of current through the molecule is similar to the scattering of electrons on a molecule.

The molecule is attractive as an electronic component, because it’s much more flexible than a piece of metal. In addition to that, it can have various appendages that can move or be controlled by light from the outside.

Building components on the molecular level is probably still a matter of a far future, but if we achieve that, the new appliances would appear magical to us – just like today’s laptop computers would appear to somebody from the early 20th

Going back to the theory of collisions, how complex are these?

Electron either bounces away and the molecule stays together, or the electron remains attached to it and the molecule has to break down. For example, if a molecule had two atoms at the beginning, you end up having a neutral atom and a negative ion. When I joined Professor Horáček’s team, he decided to calculate the process in reverse. This approach is more complicated, because it is more difficult to calculate heavy particles and we had to change, improve and add a lot of code into the programs. The simplest example of such a process is to take a negative ion of hydrogen. After a collision, an electron can bounce off and a molecule of hydrogen is formed. This is exactly the opposite of breaking a molecule of hydrogen with an electron. I was working on these calculations and found out that the probability of this reaction is three times higher than the one from the previous calculations.