Charles University Collection of Plaster Casts on the Move

As does a number of other universities around the world, Charles University in Prague possesses a collection of plaster casts depicting the most important creations of the Ancient Greek and Roman sculpture art. The collection, created mainly in the 19th and in the very beginning of the 20th century, contains today 550 copies of the most significant, as well as some less known, ancient time pieces of art. 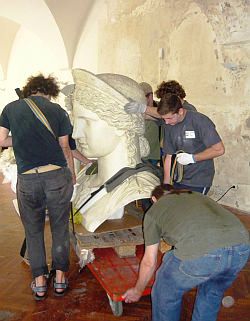 About 170 plaster casts of statues, busts and famous reliefs from the collection set on move again this September, after being displayed in the Municipal Museum Ústí nad Labem for 3 years. While the most famous part of the collection has been exhibited to the public in the Gallery of Ancient Art in Hostinné for almost 50 years now, the destiny of the other, not less numerous portion of the collection, reminds of the travails of the mythic Odysseus (Ulysses) to return home. 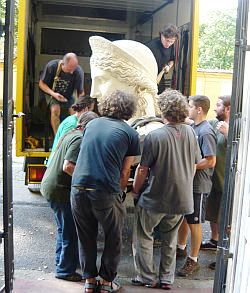 After the ejectment of the casts from the Riding School building of Litomyšl Castle in 2011, this part of the collection played the leading role in the celebratory reopening of the Municipal Museum Ústí nad Labem. It seemed that the compilation had found a stable home once more. Merely 2 years later, however, the exhibition titled “The Ancient Dream” was terminated again. In the beginning of this autumn, the plaster casts of Charles University set on the new pilgrimage, this time to the State Castle Duchcov. Here, a new exhibition, concerning not only the Ancient art but also its heritage and reflection in the Renaissance and Baroque period, should be prepared during the next year.

A complete photo gallery from the move of the plaster cast collection can be found on the websites of the Institute of Classical Archaeology of the Faculty of Arts of CU.