Whipping Each Other and Beeswax Egg Painting: Easter in the Czech Republic

Despite being one of the most secular countries in the world, the Czech Republic's Easter traditions remain strong. Egg painting, singing and gatherings all seem to be in store for this spring celebration, but no church? I went along to a Czech Easter afternoon at the Faculty of Arts to find out if this was true. 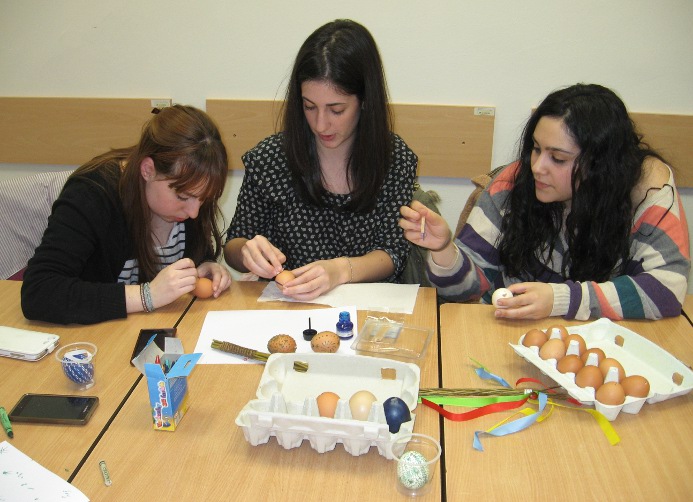 During this time of chocolate-induced weight gain, you can find far more to the story of Easter than the Biblical narration. I'm sure you'll come across pictures of bunnies everywhere, which is thought to link to the festivities worshipping hare goddess Eostre. Rabbits, chicks and eggs are all symbolic of new life, associated with spring, and various sweet treats such as hot cross buns and simnel cake were baked thousands of years before the supermarket sold them in packs of 6.

The Czech Easter is mostly dominated by folk, originally Pagan traditions, rituals and customs; in contrast to their Slovak neighbours, where religious festivities remain largely religious even in the cities, here this is largely limited to the country. The rich Pagan faith is thought to have originated from in between the 2nd and 3rd centuries AD and remained the dominant spiritual and mythological world understanding amongst classic Celtic and Slavic communities until Christianity swept Europe under the Roman Empire and in the early Middle-Ages. It has filtered through to most modern European religious celebrations that we associate with, and mistake to be historically Christian – bunnies, Easter eggs and even the date of 25th December as Christ's birthday (according to historians, Jesus was most likely born in September). Pagan beliefs were cultural responses to understanding space, time, events, fate, bodies and nature, and ritual was a contested method of manipulating them and communicating with the deities embodying them. Their beliefs may seem like fairytale fable to us today, but in fact they exemplify a very curious, inquisitive and scientifically observant community.

Today, we have tended to look back at Paganism as a unified, structured fellowship. Not only is this highly unrealistic due to the vast geographical scale and time Paganism flourished across, but surviving religious sites and artefacts show us that values, gods and methods of worship varied dramatically across tribes, “cults” and borders. So, the term Pagan is somewhat an umbrella word referring to the character of a spectrum of folk doctrines and polytheistic beliefs. It was a fascination with the world that cemented the pagan faith – devoid of humankind's technical manipulation, modern measurement and scientific meaning, astronomy, weather, climate and nature were unpredictable and powerful forces that determined their very survival. Naturally, their endeavour to understand, predict and theoreticise was engaged in a kinship of wonder with Earth and with their own spiritual consciousness. 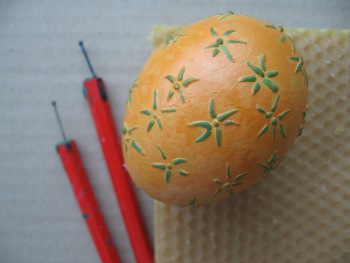 Consequently, turning points in seasonal and astronomical change such as Easter / spring celebration were significant times for them. Spring meant the end of long, bleak winters with high mortality rates, harsh weather conditions and scare food supplies. Spring equated to activity, warmth and survival as the daylight would increase in length. It signified the coming of a warmer climate, the growth of fresh crops and the birth of new animals. By the general public we find during the Czech Easter period less emphasis on the crucifixion and resurrection of Christ, and more on marking the start of spring in bloom, which for the pagans correlated with the spring equinox, or “equal day”, when the length of day and the night are exactly equal in length due to the Earth's tilt. This, like the summer and winter solstice, was an exciting event for pagans during their intense study of the phases of the Moon's orbit as it indicating the longed return of the sun and the changes in season and temperature to come. The endearment and anticipation this ancient culture held towards the spring months led to the birth of traditions paying homage to new life, reproduction and joy; traditions that were to be preserved and endorsed by generations to come.

In the Czech Republic, their pagan roots are celebrated through egg painting, baked specialities such as mazanec, dancing and of course, the odd drink or two. It is a time of getting together, offering small gifts to friends and family and waving goodbye to the long winter months. The exchange of decorated eggs is a historic tradition practised globally in spring, adopted by pagans as an offering of fertility and for nutrients after the cold had passed. You'll find that the many of the Easter stalls around Prague are selling real eggs, which as we were shown at the Czech Easter afternoon, require a great deal of skill and patience to decorate. Interestingly, they’re prepared by making small holes in the egg and blowing the yolk and egg white out, which luckily was done for us before the session. They are then brightened up with layers of spring-time colours, red in particular, in association with health, happiness and a prosperous spring. They‘re painted using thin instruments and a number of specialised methods such as ink scratching and hot beeswax decorating but techniques vary from region to region; the traditional egg painting being especially popular in Moravia and in rural areas of Bohemia. Leaves can also be stuck on to the egg shells and the eggs boiled in onion peel to create natural imprints. All of this is far easier said than done, and quite a few disasters occurred. However, Czech festivities are all about family so I’m sure they will appreciate the effort made… 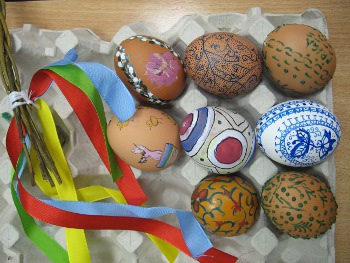 Other prominent Czech traditions include the cooking of lamb, which is deeply embedded in theistic interpretations of spring and holiness (which are culturally and religiously correlative) in relation to symbolism and diet. The timing of the lamb’s birth and their large population from around March onwards confronted people with a repeated visual presence of lambs at Easter, which naturally assigned them as central to spring time, the cycle of the seasons and to the other emotional aspects entwined with spring. Their abundance also made them a popular source of accessible food after winter.

As well as finding Easter stalls selling chocolates, eggs and tiny toy chicks, don’t be surprised if you come across the Czech Easter “whips” called pomlázka, derived from the word pomladit “to make younger“. These are bought for Easter Monday, when the men go from house to house or around the family “whipping” the women and in some regions dousing them with water to bring youth and fertility, in which they get shots of alcohol, eggs and ribbons tied to the end of the whips in return. This is more prevalent in the countryside than in the city, where traditional outfits are sometimes worn and there's a day of celebration typically accompanied as the pagans did, with cakes, alcohol, song and dance to welcome the spring and shake off the winter. This ritual or “whipping” may appear to be quite strange or even cruel to non-Czechs but after watching a video of the ritual, it seems this so-called whipping resembles tapping or petting, and there seemed to be just as many girls taking it on themselves to chase the men around in return each leap year. Czech women I spoke to on the topic also said it was fun and mostly harmless, which is what matters (also if you have any objections you can stay central, where the practise isn't carried out nearly as much!). The whips, made out of braided pussywillow, are soft and tend to be applied lightly to the legs or backside. The event seemed more like a mating ritual to me or competition or a game of kiss and chase. Interestingly, I learnt later that the whips had previously been used on livestock and the men of the household too during Easter, probably with the same reproductive intentions as with the whipping of the women.

When researching the whipping ritual, its origins instantly stood out as characteristically pagan, where ritualistic life largely centred around forces of good and evil, and methods of preventing or calculating their effects. Pagan Easter traditions are rife with “purging“ processes, believed to rid people, their environments and their future of evil which was associated with the harshness and darkness of winter, and the sickness it brings. Cross-culturally, anthropologists have identified a patriarchal, metaphorical relation of women with evil, consequently making them the focal point of the three important pagan Easter rituals: whipping, the “burning of the witches” and “drowning Morena”. The pagan burning ritual takes place on the 30th April, where communities gather to create a large bonfire in order to ward off evil spirits, again associating women (witches) and winter with demonic activity. The “drowning” practice is similar, carried out by immersing a figure representing the female goddess of death in to a river, constructed with twigs by local women.

Nevertheless, I think it’s important to consider that the original essence of these rituals – defining of women in accordance to their reproductive abilities, their affiliation with evil, mythical beliefs on seasonal change and so on – has been largely diluted and replaced by modern motives of recreation, nationalism, community and “for the sake of it”. Today for example, I imagine very few Czechs to genuinely believe that such rituals would bring fertility and shed evil. So as someone who is normally sceptical towards the over-emphasis of traditions, I left the Czech Easter afternoon feeling quite touched by this dimension of loving celebration towards friends, family and heritage in the Czech Republic. I only wish the British Easter involved that little bit more fun and fewer tacky chocolate eggs, which are getting thinner by the year…