A Fairy-Tale that Ended Badly

It’s often the neighbours that we know the less. This is true when speaking about the countries and regions bordering on the Czech Republic with the possible exception of Slovakia. When picking a place for our holidays, we mostly deem the border regions simply not exciting or exotic enough. For us they are only transfer areas leading us to the skiing or seaside resorts further to the south; places not very different from our own country.

This is a huge pity, especially because of the shared history of our countries. Thankfully though, there are exchange students coming from these regions and arriving at Charles University in Prague each year – and they are quite willing to share the historical memory of their home towns with us. One example of this is Barbara Stadler, an Erasmus exchange student from the University of Passau who attended the Faculty of Arts of Charles University in the Winter Semester 2012/13. She took part in the Europe Meets School Programme and she introduced and spoke about her home town, Straubing, and also a love story involving nephew of the Bohemian King Wenceslas IV, Duke Albrecht III of Bavaria-Munich, to the children in her host class.

…you come from a village close to the town of Straubing, not far from the Czech borders. Despite the short distance, the majority of Czech people will not have heard the name Agnes Bernauer, one of the most famous individuals who has ever lived in Straubing. I take it that it’s quite the opposite in Straubing – there is probably nobody living there who wouldn’t know the name. Could you tell us who Agnes Bernauer was and why she is so famous in your home region?

Yes, you are right – the name Agnes Bernauer is well known in Straubing. Nearly everybody here knows the tragic story that took place in Straubing around about 580 years ago.

Agnes Bernauer, originally from the Bavarian city of Augsburg, was the daughter of an ordinary barber surgeon. In 1428, when she fell in love with Albrecht, the son of the Duke of Bavaria, her life changed. Albrecht, who later became Duke of Bavaria himself, took her as his mistress and possibly even as his wife. Albrecht’s father considered his son’s relationship with a commoner as inappropriate and urged him to separate from Agnes. But since Albrecht truly loved her, he refused to do so. 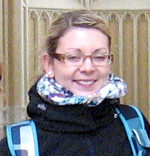 Albrecht’s father Ernst, the Duke of Bavaria, still wanted to get rid of Agnes Bernauer. In 1435, while Albrecht was on a hunting trip, Duke Ernst achieved his aim by drowning Agnes in the River Danube near Straubing. Because of its tragic ending in Straubing, the love story of Agnes Bernauer and Duke Albrecht III of Bavaria is still commemorated in my home region.

The historical memory of Agnes Bernauer has been kept alive especially by repeating her sad story in a theatre play shown in Straubing during the regular festival of Agnes Bernauer. How often is this festival held? And when does it take place?

There are a number of historical festivals similar to the one in Straubing in Bavaria. Probably the most famous (when not counting the Passion Plays in Oberammergau which are more religious) is the Wedding of Landshut in the town of the same name. Have you ever attended (or do you plan to go to) any other of these festivals? Is there any other historical festival dedicated to Agnes Bernauer? Or the period of time she lived in?

The Wedding of Landshut is a famous spectacle I visited when I was younger. It also takes place every 4 years (2013 again) and the whole city commemorates the marriage of a Polish princess with a Bavarian Duke in 1475, by re-enacting the wedding ceremony. There is also a Knight Tournament in Kaltenberg (near Munich) being held this year, where one can experience the medieval spirit of markets, artists and lance fights on horseback.

Concerning other Agnes Bernauer Festivals, there is one in the city of Vohburg, where Agnes and Albrecht spent their few happy years. These plays are quite similar to the ones in Straubing, as they are open air and take place every 4 years as well.

One historical festival of a different kind is the “Further Drachenstich“. The city of Furth, close to the Czech border, stages this festival every August. The story is set in 1431 and consists of a dragon, who awakes from his long sleep by the bloodshed between Bavarian Catholics and the Hussites (= members of a Bohemian church reform movement of 1420s-1430s). In order to prevent the dragon from destroying the city of Furth, the hero of the play has to kill it and save his hometown. This is probably the oldest public play in Germany and is not only set in the time of the Hussite Wars, but also takes place in the period of Agnes Bernauer.

There are very few Czechs who would know that Agnes Bernauer’s husband, Duke Albrecht III of Bavaria-Munich, was elected to become the King of Bohemia in the year 1440. Were the children and the teacher(s) in your host class very surprised when you mentioned it? Why did Duke Albrecht decide not to take on the crown of Bohemia in the end? 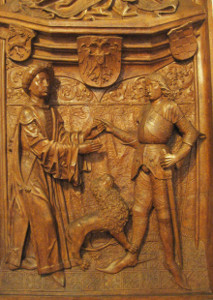 When I mentioned Albrecht’s possibility to become King of Bohemia, the pupils as well as the teachers in my host school, Primary School Strančice, were quite surprised. They had never heard of this fact before and found it interesting that there was a small connection of the Agnes Bernauer story I told them and the history of Bohemia.

To cut a long story short: Bohemia needed a ruler after the Hussite Wars (1419-1436), but was at that time a troubled area not many leaders wanted to deal with. Only few candidates had a realistic chance to control this region. As Albrecht grew up at the Royal Court in Prague (this was because his Aunt was married to King Wenceslas IV), he spoke Czech and knew the country well meaning that he was a serious candidate for the Bohemian estaves because of this background. But the Bohemian estaves wanted to unite the Bavarian dukedome and the Bohemian kingdom. However, this was not possible because Bavaria was a feudal territory of “Germany“ (properly called Holy Roman Empire back then) and could not act independently.

When Albrecht was elected to become King of Bohemia in 1440, he had already lost his beloved Agnes. As he was strictly catholic, it was not possible for him to rule over a heretic country. All those facts led to Albrecht’s denial of the Bohemian Crown.

Straubing with its famous love story was not the only place you introduced to the children in your host class. You spoke about the whole region surrounding the river Danube between Regensburg and Passau. You yourself study in Passau, one of the favourite tourist sights of Danube region. How is it to study there?

Passau is a lovely city situated at the confluence of three rivers. It is close to the Czech and Austrian border and has several beautiful sights. There are three major tourist attractions in the city: the fortress Veste Oberhaus, the Old City and of course St. Stephen’s Cathedral with the second largest church pipe organ in the world. Due to its location upon the river Danube, Passau is a famous tourist destination for river cruisers. Lots of tourists cross my way especially in the summer, when I am cycling to the university or when I am walking through the city centre which consists of mixture of Gothic and Baroque architecture.

Studying in Passau is wonderful. The flair of a small town (50.400 inhabitants) is combined with the university’s international and intercultural focus (the university has approximately 10.000 students) and creates an ideal atmosphere for studying.

The University of Passau has two major advantages. We benefit from the short ways our Campus University provides, and its location by the river Inn. This allows us to have relaxed study meetings in university parks with beautiful views of the surrounding nature. Due to recent political reforms (e.g. general abolition of compulsory military service), German universities and especially Bavarian ones (here the shortening of the school attendance from 13 to 12 years is currently the biggest issue) have to deal with more students. Thankfully, although some lectures and seminars are overcrowded, most of the courses can be extended and the increased number of students can be covered.

Thank you for the interview.