Putin's Bare Chest: What it Really Means for Russia

‘Technological symbolism in Putin's Russia: is there a continuity with Soviet icons?' This is the question Paul Josephson (Colby College, Maine) posed to us as he began his lecture in the Faculty of Arts on the 12th November. As a relatively neutral spectator during this lecture, I was surprised to find that Paul Josephson's probing into Putin's publicity actually captured my interest more vividly than I expected. I'd be the first to admit that Russian politics aren't my area of expertise, but they didn't need to be - Josephson explored the topic so admirably that I learnt more in the lecture than I had in the four years Putin had been president of Russia. 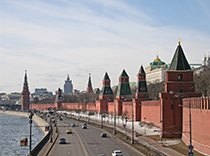 Josephson used a lot of pictures to illustrate his points; which was necessary really, considering how the lecture centred around Putin's publicity stunts and their link to similar uses during the period of the Soviet Union. Here is the overriding theme to the lecture: Putin use of his monopoly over the media to illustrate to the public his dominant power, control and superiority, just as Soviet icons were used as the same effect. There's the classic image which, personally, was my favourite, and which credited a rippling laugh from the attendees: Putin bare chested and straddling a rifle in his hands. Now, to me, this image was ridiculous, but Josephson explained what it really meant: the image it presented to the Russian public. An image of Putin as the master of the Universe, more powerful than nature itself.

So how did this compare to the use of Soviet icons? This is an area I would have liked Josephson to have explored more: a little less focus on the present, and a little more link to the past. He did, however, make use of some very good examples. One of these was in the use of the nature transformation process. Putin has placed himself at the forefront of achievements in the arctic, oil and gas transportation and hi tech developments. Here is the idea: Putin is above nature, he can control nature, the uncontrollable. Numerous photographs demonstrating this are plastered throughout the media: Putin as the hunter, Putin taming Siberian tigers, Putin undersea as Russia 'claimed' the arctic. Josephson makes the link here to the way media was used to demonstrate Soviet power over nature in the past. The soviet method of asking workers to work for free on Saturdays is likened to the construction of the 2018 world cup stadium, in which Gazprom workers were asked to volunteer for free.

The thing that most interested me is the absurdity of it all. Putin can't afford to pay his workers but he can dish out the millions to keep snow frozen for two years. Why? Because Putin can make it winter whenever he wants; Putin can do the undoable. Just like his predecedors in Soviet Union could beat gravity and send the first man into space. Picture the scene: a group of cranes bred in captivity are set to be released into the wild. Of course, Putin is there with his cameras, hang-gliding in order to 'guide' them back into their habitat. What is this image supposed to convey? Putin as the hero, the saviour, the good man.

It's a point that needs to be taken. Once you actually study the publicity stunts, you realise how unsubtle they really are. But if you didn't - well you'd be clueless as I was going into the lecture. It's important to be aware, because politics and politicians should not be in the position to manipulate and control so easy. Media should not be monopolised, and propaganda has found a new way to control what we think.  It might not seem as obvious as looking back on the way Lenin and for a time Stalin were used as Soviet icons to symbolise the state’s power and control, but it is still very evident today; not just by Putin in Russia but undoubtedly worldwide - the USA demonstrates a very prime example. Let's look again: Putin bare chested and straddling a rifle? Does it really make Putin look macho, strong and powerful? Or is the joke on him?