An academic who has conducted research on topics ranging from wages in McDonalds to the effect of weather on wine was on the 15th of January awarded an Honorary Doctorate from Charles University in Prague. But it was not for his wine equation, as useful a discovery as it may be that Professor Orley Clark Ashenfelter, the Joseph Douglas Green 1895 Professor of Economics at Princeton University, was awarded the doctorate by Charles University. The Scientific Council of the Faculty of Social Science who put his name forwards proposed that he receive the award for his “indisputable scientific contribution” and “his long-standing support of economics education at Charles University”. 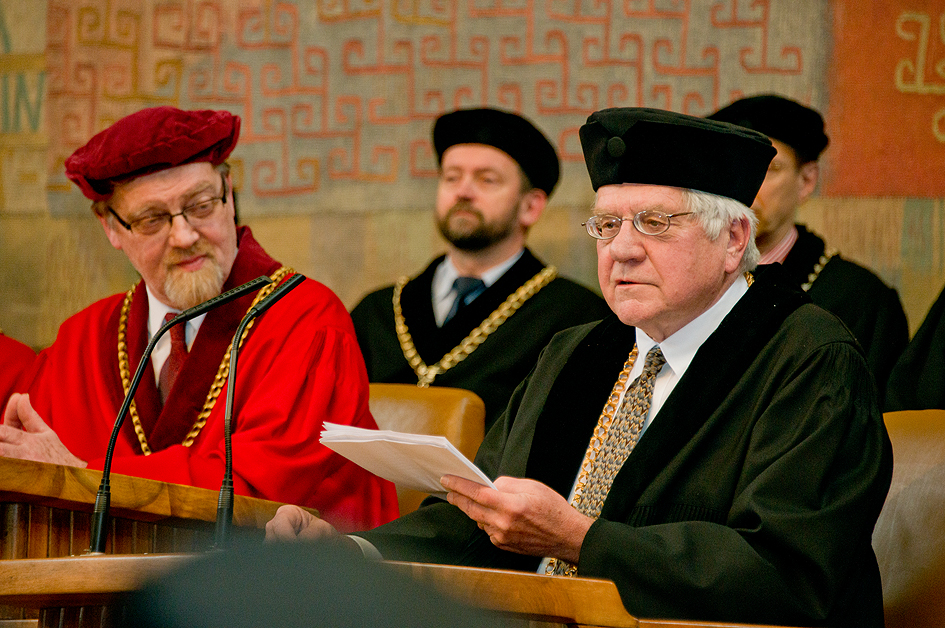 How has an American economist come to contribute to the teaching of economics in Prague? Professor Ashenfelter has been involved for over 20 years with the CERGE-EI Institute, or “The Center for Economic Research and Graduate Education – Economics Institute”, a joint venture between Charles University and the Center for Economic Research that offers American-style graduate degrees in Economics. Founded in 1991 with students from former Eastern bloc countries in mind, it teaches in English and attracts academics from all over the world both as students and teachers. I asked Professor Ashenfelter about his involvement with the Institute:

“I really got involved because two of my former graduate students were connected to it, Jan Švejnar and Randall Filer… and they got me interested, they introduced me to the place. It was 1992 I think the first time I came, and it was a very exciting place, and a lot of interesting things were happening.”

He went on to describe the purpose of the Institute and its graduate program, and why it was and continues to be so important:

“Under the Communists … economists really had difficulty because part of it (economics) is about forecasting and its quite objective, and it was difficult because of the Communist use of economics and Marx, it was difficult for them to have any sort of education. (You had) statisticians, mathematicians, but not much in economics.  But when you try and go from a Communist to a Capitalist system it’s useful to have some economist – it’s one of the few times when they are useful!”

So, apart from his work in Prague, what has been his “indisputable scientific contribution” to the study of economics? Aside from what has been mentioned already, Professor Ashenfelter is a leading labour economist who has made important contributions to empirical research methods within a discipline notoriously difficult to conduct research in. In an interview with the professor I had the opportunity to ask him about his research. He is widely credited with developing the use of so-called ‘natural experiments’ in economics:

“Most labour economists are pretty empirical; they don’t think you can solve problems with theory alone. I came to have several experiences which made me interested in trying to have very credible empirical work, so it wouldn’t just be collecting numbers, and adding them up. It would be an attempt to find a way to use casual inference.”

“It’s a very good example of causal influence, and the reason is because what we are predicting is the price of wine, and what we are using to predict the price of wine is the weather. So since most of us don’t think we can control the weather, the weather really is strictly exogenous, and must be what’s causing. If you see a correlation between the weather and the prices then it must somehow be because of the connection.”

Professor Ashenfelter was a truly fascinating man to talk to, despite our disagreement over the presence of vowels in the Welsh language (which is my mother tongue).  And whether economists are useful beings or not, Professor Ashenfelter’s undeniable contribution to the study of economics has been recognized by the Faculty of Social Sciences at Charles University in ceremony in the historical Aula Magna of Charles University, with all the pomp and Latin due for such an achievement.