Writing an article on the election for a head of state is something of a novelty for me. Coming from Scotland, we have Queen Elizabeth as our head of state. We have elections to Westminster, to the Scottish Parliament at Holyrood, but none for our highest representative of state. This is the first time Czechs have had a direct election for the Czech presidency, and the first round result has already delivered a surprise, with Karel Schwarzenberg performing far better than expected. To someone as interested in politics as myself, this election offers a fascinating insight not only into the political life of the Czech Republic, but also into the divisions that still remain in Czech society. 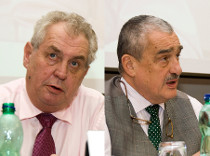 Before the first round of voting, it was widely predicted that former Prime Minister Jan Fischer, an independent technocrat appointed after Mirek Topolánek's resignation, would perform well. The other front runner was Miloš Zeman, like Fischer a former Prime Minister, and the ex-leader of the social democratic ČSSD. Instead, Karel Schwarzenberg, an aristocrat, former emigre and leader of the liberal conservative party Top 09, took most pollsters by surprise and came in second, less than a percentage point behind Zeman. Thus, the first round gave us the classic left versus right ideological battle for the presidency, with Zeman victorious in the ČSSD heartlands of Moravia (with the exception of Brno) and North-West Bohemia, and Schwarzenberg winning in Prague and the rest of Bohemia. However, for me this election epitomises far more than the normal conflict between left and right. Zeman was a member of the Communist party during their rule, Schwarzenberg an emigre living in Austria. Schwarzenberg is wildly popular with younger votes and the intelligentsia, with Zeman representing the older generation, and those, for want of a better phrase, lost out post 1989. To me, this election represents not just the battle for the Czech presidency, but for the heart and soul of Czech political life.

Naturally, we must usually deal in generalisations when analysing any political event or system, and there will always be those who defy generalisations when choosing who to support. However I believe that, thanks to the polarisation of the candidates ideologies in the second round, this election will dictate the prevailing ideological position of Czech politics and foreign affairs for quite some time. Schwarzenberg, if elected, will no doubt steer the Czech Republic towards a far more pro-EU position than Václav Klaus allowed. He is also far more supportive of action on climate change than Zeman, who regards it as a myth. Zeman, it has been argued by some, will play a more active role in day to day politics, with his opponent more likely to play the more traditional role of a political figurehead. Even if we consider their personalities, the two couldn't be further apart. Zeman, the outspoken career politician reminds us of Klaus, and Schwarzenberg, a sophisticated liberal with a penchant for bow ties certainly reminds me of Václav Havel.

Who will win though? Normally I'm adverse to predicting election results, as I never want to be wrong of course. In this case however I'd hesitate to predict who'll win because, after the result of the first round, frankly it's far, far too close to call. The campaign has certainly been very negative in parts, which is sadly all to common these days. Let us hope that, whatever the outcome, the end result is a positive change for the Czech Republic.