A walk through the history of pharmacy at Kuks Hospital

About 30km away from Hradec Králové (135km from Prague) lies a small village that spans both sides of the river Elbe. As you approach by bus the first thing you will notice is the large palatial looking building sitting proudly atop a hill. This is Kuks Hospital, which is also home to the Czech Museum of Pharmacy, owned by Charles University. Although the hospital tour does include a pharmacy, be sure not to miss the stunning and vast collections provided for viewing in the Czech Museum of Pharmacy, a separate museum to the hospital museum, although on the same grounds, that has a small additional cost to enter. 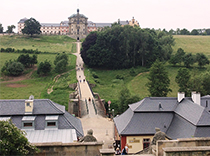 On first walking into the museum a breath-taking collection of articles are laid out to mimic a historic pharmacy shop-front including jars, pestle and mortars, numerous pharmaceutical preparations and even a till!  Throughout the tour, the rationale behind the various types of jars and medicines are explained.  I found it really interesting to see how some of the oldest concepts are still often the basis for modern medicine whilst others have since been disregarded and may even be laughed at today!

As you continue walking through the museum the complete story of pharmacy is told in a chronological order, ending with a more modern day outlook on the profession including information on how recent changes in the Czech Republic healthcare system has effected the pharmacy profession.  As well as showing the more common articles there was also a large array of more novel pieces such as a display of homeopathic medicines and examples of different pharmacopeia’s from multiple countries.

A particular area of interest was the labelling display in which a large proportion of the tour got very excited with the possibility of being able to use the stamps provided to create your own label for a medicinal bottle or jar. This display also reiterated how times have changed and processes have now been simplified to decrease human error along with making processes more cost effective but simultaneously how traditions within the pharmaceutical industry have been lost due to this.

The museum also displays a number of pieces of equipment that are associated with industrial pharmacy including tablet machines and pill-manufacturing machines.  This was a particularly interesting element to the museum as very often the focus isn’t on these types of articles.  Therefore this allowed a more in-depth insight into what exactly pharmacy entails including the manufacturing of medicines.

The Czech Museum of Pharmacy is still well worth a visit, as is the hospital itself, even if Czech is not your first language (as in my own case).  Detailed written guides are available in a variety of languages so you can rest assured you’re not missing any of the information given out.  You will also find that in the museum certain displays have a 3D element to them, often giving you a chance to try using the equipment yourself, allowing you to understand exactly how they work even if you are not quite keeping up with the language!

Overall, the Czech Museum of Pharmacy really sums up exactly what the pharmacy industry and profession is and how it has changed over the years.  With something for everyone to look at I would highly recommend it to anyone looking for a day trip, even if you’re not studying pharmacy! The large displays provide plenty to look at including many unexpected articles, such as a human skull.  It’s safe to say I could have easily spent much longer looking at everything on display than was allowed for in the tour and overall I had a really enjoyable, memorable and educational day out.