Within the cloister of Karolinum, the main seat of “Universitas Carolina” in the heart of Prague’s Old Town, hangs a large yet modest, heavy grey curtain. Behind it sits a wonderous trove of paintings, engravings, chronicles, reliquaries and treasures of a bygone age. Huge canvases adorn the walls, depicting ancient battles and gatherings, all with a central, noble figure: Charles IV.

The temporary exhibition “The Second Life of Charles IV” at Charles University celebrates the 700th anniversary of the birth of its founder, and is part of the greater commemorative exhibition project “Emperor Charles IV“. It has been curated by a collaboration of forces including the University, the Prague National Gallery and the South-German House of Bavarian History. The King of Bohemia and Holy Roman Emperor is probably the most important figure within Prague’s rich historical tapestry. The admiration of this prominent individual is felt far and wide throughout the Czech Capital, with statues and monuments carrying his namesake dotted across the baroque cityscape.  Although a little on the small side, this exhibit is still impressive and is a testament to the main exhibition in the Prague National Gallery. 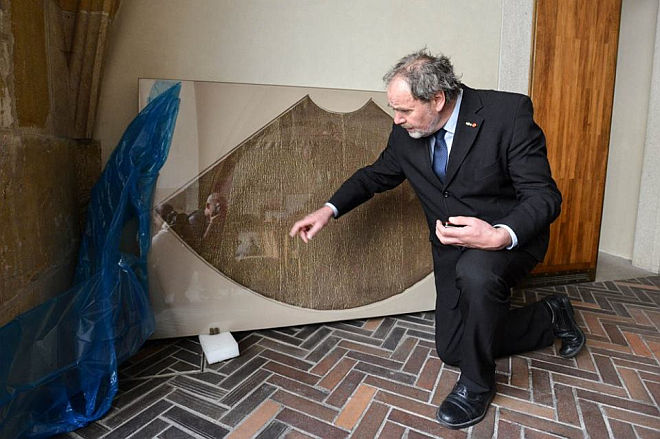 In the first room behind the large curtain, a variety of skillful historic paintings line the stone walls. Most originate from the 19th century, a period when people liked to recall the glory of times passed, with a particular tendancy to idealise the middle-ages. On the far left wall a scene depicts a large battle: upon closer inspection, it becomes apparent that it is of the Battle of Crécy (1346), painted with oil by Viktor Barvitius in 1860. It shows King John of Bohemia, often referred to as “John the Blind” for a fairly evident reason. King John died fighting, as this painting shows, despite having been blind for an entire decade prior to this; many would likely agree that this is an fairly honourable and brave feat for a King.

A further painting shows King John stealing away a baby from his wife Elizabeth. This was his eldest son whom the King was worried would be used as a catalyst in a coup d’etat or rebellion, and thus took him as a preventative measure. The son was none other than a young Charles IV who, despite his fathers attempts, eventually succeeded him none the less.

As we delve further into the exhibition, a succession of smaller paintings, drawings and engravings are dotted along the walls depicting events from Charles’ life, as well as places connected to him such as Karlštejn or Křivoklát Castles. However, the most impressive thing to see here by far is in a large, glass case, sitting centrally in an adjoining room. It is a coat, red in colour and so heavily embroidered with gold brocade that it has attained a resplendent quality, a garment which apparently belonged to the man himself. The fact that this material is nearly 700 years old is astounding considering the fine condition it is in. The coat was made in Venice in the mid 14th century and was brought to Prague for the sake of this exhibition from the Galleria Giorgio Frachetti alla Ca‘ d’Oro in Venice.

Towards the end of the displays there is an image of Charles IV as imagined from the 20th century. In 1969 and 1973 two films were made in Czechoslovakia which helped propogate the idealised image of Charles IV among the Czechs. The black and white “Delights of Pater Patriae“ from 1969 depicts the maturing of Charles IV, while the 1973 musical “Night at Karlštejn“ shows the King and Emperor during the time of his fourth marriage.

As previously stated, the exhibition is open to the public in the Cloister of the Karolinum building of Charles University and is definitely worth a visit for an insight into the life of such an important figure in Czech and European history. The exhibition is open Tuesday to Sunday from 10am to 6pm until the 31st of August and is free of charge.