Chelyabinsk meteorite being studied by scientists from the Faculty of Science

As soon as the news that a large meteorite had fallen near the town of Chelyabinsk started spreading around the world on February 15, Dr. Gunther Kletetschka, Ph. D., from the CU Faculty of Science, started organising an expedition to Russia. Together with his student Ladislav Nábělek and Darja Kawasumi, a specialist in international relations, they were the first foreign researchers to carry out field research in the area where the meteorite fell. One of the things they are searching for is, for example, whether some hitherto unknown organism didn’t fall to Earth with the meteorite. 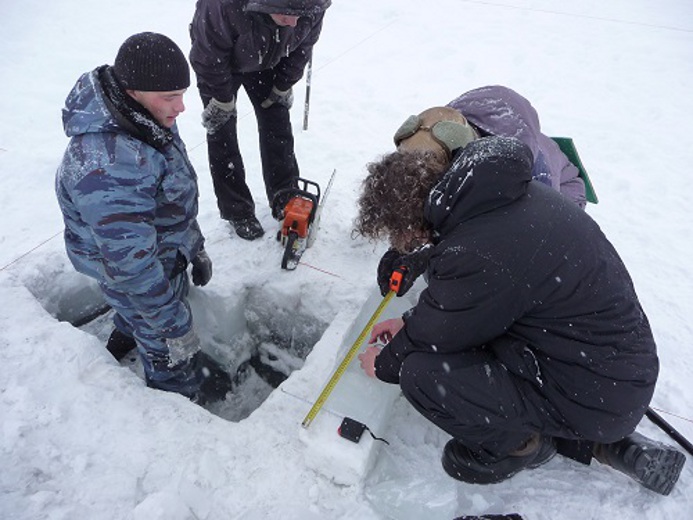 “The first thing that occurred to me when I heard about it was that we had to get there as quickly as possible. The longer the meteorite lay there, the fewer traces would be left for us to study. So I was surprised that we were, after the two Russian research teams, the first foreign expedition to go there,” said Dr. Kletetschka, who is a member of the Institute of Hydrogeology, Engineering Geology and Applied Geophysics of the CU Faculty of Science.

The Faculty of Science team reached Chebarkul Lake, into which the meteorite fell, on 6 March, nineteen days after the meteorite, travelling at a speed of almost 500 kilometres per hour, broke through the layer of ice covering the lake, falling to the bottom, ten metres below the surface.

The very fact that the meteorite penetrated the crust and fell to the bottom of the lake is one of the things interesting Dr. Kletetschka. “There are several places in our solar system where we know there is ice. These are Jupiter’s moon, Europa, and the planet Mars, which has a number of ice features. The morphology of the hole, which was photographed shortly after the meteorite fell, looks very similar to one type of crater on Mars. We could, through the use of analogies, determine how some features in Mars or Europa were created,” explained Dr. Kletetschka, who had previously worked with NASA on the development of technical fittings for the Curiosity probe, which is currently exploring Mars.

A further area of interest for Kletetschka is the study of organisms living in extreme conditions, for example tardigrades, which are the only organisms on Earth able to live in a vacuum or at absolute zero, i.e. minus 273.15 degrees Celsius. Tardigrades are even able to survive hibernation with no ill effects. 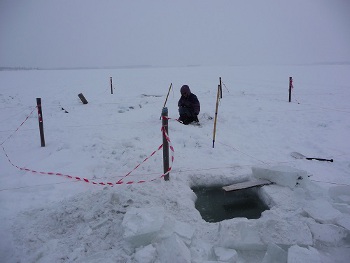 It is precisely this kind of organism that might be able to reach Earth via a meteorite. “Meteorites larger than ten metres can preserve within themselves organisms or molecules resistant to harmful space radiation, subsequently conveying them to another planet, in this case Earth. Several teams have already and are trying to find out how it is possible to survive in space. Organisms like these can give us answers,” speculates Dr. Kletetschka, adding that he would also be studying the meteorite’s magnetic properties, which could reveal the conditions under which the asteroid was created.

However, no-one has yet seen the meteorite up close. Divers searching in Chebarkul Lake have so far failed to find it. “The Russians’ hypothesis was that the meteorite fell from a height and went straight down. The divers therefore looked for the meteorite directly beneath the hole. According to the calculations of our colleagues from the Astronomical Institute of the Czech Academy of Sciences in Ondřejov, however, the meteorite was travelling at a speed of almost five hundred kilometres per hour when it fell to ground and that the angle of fall was 16.5 degrees, which is a very acute angle. From this we can infer that the meteorite cannot be directly beneath the hole in the ice,” added Dr. Kletetschka, who confirmed his theory in situ, where he carried out a magnetic test. “We used a magnetometer to create a magnetic map and found that the meteorite is much further away than originally thought,” he noted. With the help of local students, the Czech team set up a network of gathering points at the likely impact point and surrounding area; researchers drilled holes in the ice and took samples of sediment, which are currently undergoing analysis in the laboratories of the Faculty of Science.

According to Dr. Kletetschka’s estimates the meteorite weighs a minimum half a tonne (further, much smaller, fragments of the original meteorite were strewn over the whole surrounding area of the city of Chelyabinsk) and is now encased in a kind of porcelain crust. “The meteorite landed in clay, which probably hardened, as the surface of the meteorite was, at the moment of impact, heated to a high temperature. The clay therefore formed a protective, porcelain crust, protecting it from earthly contamination,” he explained.

The meteorite will have to be retrieved from the lake complete with the layer of clay enveloping it. This layer could, in itself, contain further valuable information on temperature to be gleaned by scientists. However, it is not yet clear when the town of Chebarkul will permit the raising of the meteorite from the lake under specialist supervision. “At the moment we prefer freezing the meteorite with the surrounding mud and then lifting out the whole unit, meaning it could be removed without causing too much disruption. Then we’d just have to defrost it,” suggested Dr. Kletetschka, noting that he would definitely be present when it was pulled out.