• Courage to speak up required in all difficult and turbulent times

Prague’s Charles University is proud to have hosted its first Cleveringa lecture at the Patriotic Hall this week, commemorating a famous courageous protest speech by Professor Rudolph Pabus Cleveringa on November 26, 1940 at Leiden University against the dismissal of Jewish colleagues. The speech led to a student strike and closure of the university by the Nazis.

In his address in the Patriotic Hall, Professor Piet Hein Donner, a former Minister of Justice in the Netherlands (and the Cleveringa Chairperson for Law , Freedom and Responsibility at Leiden University in 2015/2016) discussed the need for individuals to take responsibility in periods of political uncertainty and turbulence even today – and to nurture and trust in democratic values and in constitutionality instead of easy and forceful solutions.

The latter, he outlined in his presentation, chipped away at or eroded democratic and humanist principles our predecessors fought hard to establish and sacrificed to restore.

I caught up with Professor Donner at the Patriotic Hall and my first question focused on the long-lost optimism of 1989 that had emerged with the fall of the Berlin Wall.

“There has indeed been a change of mood from the Iron Curtain came down to the present day. I think that that can be traced back to 9/11 and people are feeling more insecure, they have lost optimism, they don’t trust themselves anymore and they don’t trust in political institutions anymore… Another problem is that despite all of the economic growth, there is a growing number of people who haven’t seen their own position improve. And who also don’t have any perspective of improving their position.

“That is a good feeding ground for politicians who promise to solve all the problems that democracy cannot with ‘easy’ measures. Such as in Italy, giving out huge sums of money which will have to be repaid later on. That is the danger we are facing now: there are real problems but at the moment what is presented as a movement to ‘take back control’ actually threatens to lose control.”

One of the things you touched upon is that these are easy solutions and Europe has seen this before. In the U. S., as a candidate, Mr Trump said “I alone can fix this”, you have populist or strong-arm politicians in places like Hungary and elsewhere. But in your lecture, you maintained these are at best short-term and therefore not really solutions at all.

“They are not solutions. And you can see it. Mr Trump is solving some problems maybe in the short-term but in the long-term he is undermining a whole system of trust in international relations on which prosperity and growth are built and founded for the future. The same goes in Europe: there are short-term solutions for what are now defined as immediate problems but like in the United States are denied such as global warming and climate change. Because if you recognize that it is a problem, then you immediately also have to recognize that you also cannot solve it on your own.” 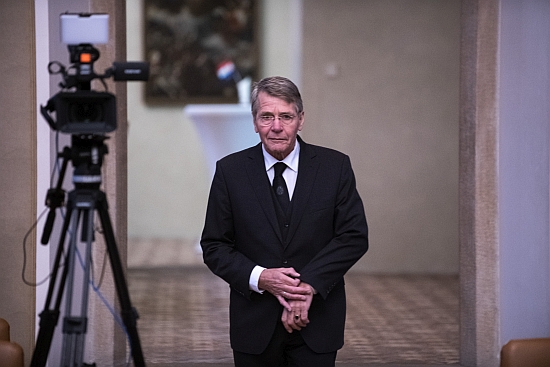 Are populist politicians in Europe promising a return to something which can no longer exist?

“What they promise – sovereign autonomous states where everybody manages their own problems – that was a reality we had in an earlier age. But that doesn’t take into account that in the meanwhile, we have become extremely interdependent as societies. Not only because of how economies have developed but also with the advent of digital techniques we have solved that know no frontier.

“Individual states are no longer capable of solving questions of criminality, of global warming, of inequality and emerging social differences, on their own. We cannot tackle those problems on our own and that is why we need European cooperation. That is not a limitation of possibilities but an extension. We can do more – together.”

We have seen such a period of stability and peace in Europe within the EU for 50-60 years, unprecedented economic growth: all the tools seem to be there. Obviously, reforms are needed but the tools are still there…

“The tools are still there but the world is changing and the mood of the people has changed. And that is going to be the problem. The real challenge is to convince people again that the solution is not to withdraw behind your own border but to cooperate. The problems we face are not easy to solve and they don’t have fast solutions. We will be far better off if we try and find common solutions rather than each on our own.

“A case in point is global warming. As I indicated, in the Netherlands our lowest point is seven metres below sea level. We can take all kinds of steps we need to take against global warming but if the others don’t do it, we’ll drown.