Graduation Ceremony of the Faculty of Law

On a cold morning in April, I had the opportunity to experience a traditional Czech graduation ceremony ('promoce') in the historical building of Karolinum. The students in this ceremony were graduating from the Faculty of Law at Charles University in Prague, having obtained a masters degree.

Graduation ceremonies are traditionally held in the main auditorium of the building, which was renovated in the 1940s. The room is beautiful and suited to special occasions such as this. At the front hangs a large tapestry showing Charles IV, the founder of Charles University, kneeling before Prince Wenceslas (this image can also be found on the university seal). To the left, there is also a bronze statue commemorating Charles IV. There are two rooms off from this main hall that are not usually seen by the guests. One is where the academics and important administrative staff from the faculty and the university get ready. Traditional, ceremonial dress is worn by the people in this room (although surprisingly – at least for me – it is not worn by the students) and their job in the ceremony is shown by which style and colour of robes they wear. Most of the staff wear plain black gowns. The other room is for the students who are graduating. This is where they prepare themselves and get ready to enter the main hall. In this room there is a mirror with the Latin inscription 'spondeo ac polliceor' over it where the pupils can practice the promise they will soon be making to the university. Even though the students do not wear the graduation gowns that are seen at many ceremonies, they all look very smart in suits and dresses.

The ceremony starts with the students and staff parading into the room in pairs. Everybody stands and organ music fills the room, playing the Czech national anthem and the traditional Gaudeamus Igitur, which are also played later on in the ceremony. As it soon becomes apparent, Latin is used quite regularly, presumably in keeping with the traditions of such a historical university.

Graduations are held throughout the year and usually around twenty to thirty students graduate at each ceremony. The students are able to bring whomever they want at no cost. At the front of the room next to where the students line up, there is a small area for close friends and family to sit. The rest of the guests sit further back and anybody is welcome to take a seat. There are flashes and camera clicks from all directions; this is definitely a very proud moment for many people and they make sure it is well documented.

After everybody has entered the room and the students are lined up at the front, the vice-dean of the faculty which helds the graduation introduces each student and they step forward in turn to take a bow to the vice-rector, who must give his agreement that the students can graduate. After the introductions, the vice-rector states how delighted he is to hear that they have met the requirements and accepts them all. The diploma they receive is on hand made paper with the seal of the university and is presented in a tube. I was lucky enough to be able to inspect one of these later on and unsurprisingly, a lot of it is written in Latin. The details of the student and dates of their studies are stated and there is a breakdown of all the subjects they have passed and the grades they achieved for each.

After the diplomas are received, one of the students steps to the front to give a speech. Thanks is given to various people including family, friends and the staff from the university. The student giving the speech speaks with pride about the faculty and its origins and traditions. The Faculty of Law is one of four faculties that have been in existence since the founding of Charles University in 1348 and is therefore held in high regard. This is clear throughout the whole ceremony. 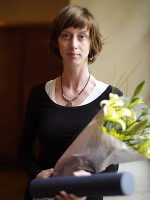 After the speech, the academics shake the hands and congratulate each of the students in turn and they parade out of the room. After the official ceremony, the students filter out and are greeted by their loved ones with flowers and cards. Many more pictures are taken and it is traditional for the students and their families to go out for a 'graduation lunch' afterwards.

It was a fantastic opportunity to be able to experience first-hand a typical graduation ceremony from Charles University. Although traditions may vary between universities and countries, it is clear that the sense of pride and achievement from both the students and their families is the same everywhere.