At a meeting of the Research Council on Thursday 18th April, 2013, the Silver Medal of the Faculty of Arts was awarded to British scholar and translator Patrick Corness in recognition of his achievements in the dissemination of Czech culture and scholarship abroad and the advancement of Czech translation studies, linguistics and language teaching methodology. In the interview we talked about translation from Czech, problems of poetry translation and software applications designed to assist translators. 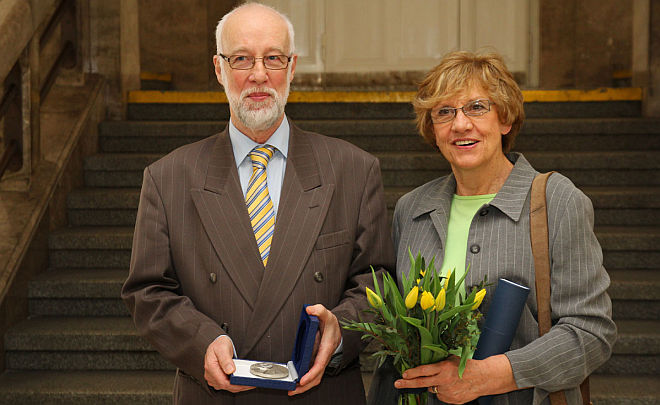 How did you first become involved in Slavonic studies?

That is a long story, partly to do with various family connections. I have family in Prague too, and my wife and I come here regularly to see them and our many Czech friends. There are also the attractions of cultural events, the National Library, my associations with Charles University and much more. During my present visit I will have the great honour of receiving a Silver Medal from the Faculty of Arts, a truly exceptional life event for me.

Amongst your list of publications, the English translation of The Art of Translation by Jiří Levý particularly caught my eye. How did you come to be involved in that project? Is it actually possible to translate a book such as this, which is a kind of handbook for Czech translators?

As it happens, I acquired the first edition of the book in Prague in 1963. Subsequently, Jiří Levý wrote revised versions of his work for German and Russian readers, and these editions were translated into the two languages. Unfortunately, the revised source texts in Czech have not survived and the second Czech edition is actually a back translation from the German version. Translating Levý’s classic work into English was a complex task. For example, in discussions with my Editor, decisions had to be made regarding the selection of appropriate translation case studies for the English-speaking reader and the omission of sections which were too specifically addressed to a Czech reader.

I subsequently compiled a tetralingual parallel corpus of the respective editions, for inclusion in the InterCorp project of the Czech National Corpus. This makes it easier to understand the history of the book in its various manifestations.

Is it possible to learn to translate this way, or can translation be learnt only through experience and practice?

Jiří Levý’s book is a brilliant guide for the translator. It may seem very straightforward, but its readability is deceptive; the theory is subtle and involved.

Translation tools are very sophisticated today, but they can never be totally reliable and they can never replace the human translator. People sometimes have the impression that they could simply feed a text into the Google Translate application instead of employing someone to translate it for them. They need to be aware that technology, however sophisticated, is still only a tool.

There are excellent online resources, including extensive dictionaries. Actually, one of the best resources for translators is the Google search engine itself, which enables you to check usage, grammar, syntax and much else in a foreign language; if an expression cannot be found on Google (as an exact phrase), the chances are it is not correctly written. I use Google this way myself and I cannot imagine working as a translator without access to the internet, a treasure trove of information.

Do you also translate fiction?

Yes, I am mainly engaged in translating works of literature – novels, short stories and poetry. I enjoy translating contemporary Ukrainian literature, which is relatively little known. There are many Ukrainian labourers in this country, but people are less familiar with the historical connections between Czechoslovakia and Ukraine. Fortunately, there are people like Rita Kindlerová, who translates Ukrainian literature into Czech, raising cultural awareness, for which she has been awarded a prestigious literary prize in Ukraine.

I have translated some works by Nataša Tanská into English – a children’s book, and some of her poetry, which I like a lot.

I am tempted to consider translating some Czech fairy tales. I recall that once some English visitors to Prague asked for a book of Czech fairy tales, translated into English, for their grandchildren. Unfortunately, none of the available publications had been translated by an English native speaker, so they were unsuitable.

I hope that such a book could be successfully published. Today’s children are more used to Harry Potter, but hopefully a book of Czech fairy tales in English would have a place on the shelves too.

Very much so. Everyone knows Milan Kundera, but then one might ask whether he is actually a Czech writer. In addition to the classics like Čapek, there is Viewegh, for example. His Bringing up Girls in Bohemia has been excellently translated by A. G. Brain. Or Miloš Urban, some of whose writings have appeared in English – not his collection of short stories entitled Mrtvý holky [Dead Girls], however, as far as I know – that would be a popular publication.

Regrettably, the proportion of translated literature on the English book market is very small, compared with the situation in this country, where translations possibly account for something like forty per cent.

They say that writers master either the “discipline” of the novel or that of the short story. Is this the case with translators

Levý expresses the view that good translators of prose often make poor translators of poetry, and vice versa. I attempt both. Translating poetry is something of a brain-teaser. A particular problem here is the fact that the rhyming vocabulary of English is limited, making the translation of poetry into that language especially difficult.

was born in Newcastle-under-Lyme, North Staffordshire. He studied Slavonic languages and German at the University of London (SSEES & UCL), Moscow State University and Charles University Prague, and was a university teacher for most of his career (Russian and German at Sunderland, Coventry, Warwick), contributing to development of the pioneering applied languages degree at Lanchester College, Coventry, from 1970. Liaison interpreter and translator in Russian and Czech. Examiner in Czech/English translation for University of Cambridge Local Examinations Syndicate. Postgraduate supervisor and examiner (MSc, MPhil, PhD) at Coventry, Birmingham, Hull, Leeds, Manchester (UMIST). Examiner for HM Diplomatic Service Russian translating and interpreting qualifications (via Language Testing Associates). Director of CITLL (research centre for IT in language learning at Coventry University). During the 1990s, co-ordinator for EU Tempus-Tacis project (Coventry/Lviv/Zwickau) promoting developments in the teaching of English and German in universities of Western Ukraine, contributor to a similar project with Moscow State University. Since 2000, literary translator into English (mostly Czech, German, Polish, Russian and Ukrainian), with an academic interest in applications of literary translation corpora. He is affiliated to the Centre for Translation Studies, University of Leeds, as an (honorary) Visiting Research Fellow and he is a member of the Society of Authors/Translators Association, London.