It can be in no doubt that Christmas concerts are a staple of Czech festive traditions, with music playing a centre role in Czech culture. On the 17th of December at 7 pm the Charles University Choir and the chamber orchestra Orchestra Camerata Carolina under the conductor Jakub Zícha performed a Christmas concert in the Karolinum building of Charles University. The repertoire included Czech advent matins from the 16th century, a collection of old European carols as well as the famous Czech Christmas mass “Hej Mistře” composed by the Czech teacher and composer Jakub Jan Ryba. 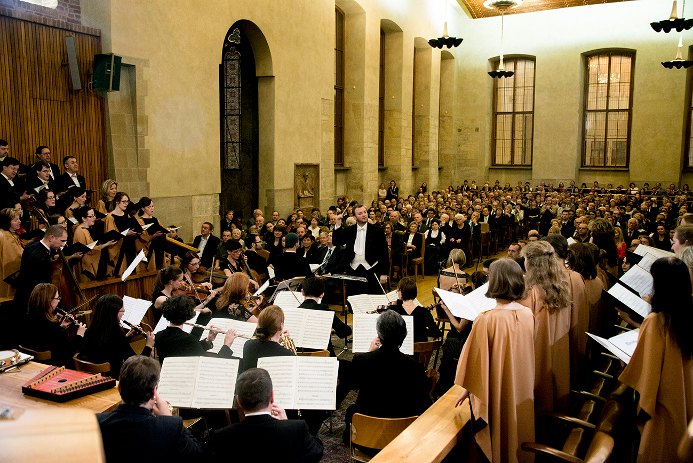 The Charles University Choir was founded in 1948, the members either consisting of those currently studying at the university or recently graduated. They perform numerous concerts throughout the academic year, recently singing at the 2014 memory awards event to coincide with 25 years since the Velvet Revolution. But it is no doubt that the highlight of any musician’s year are the Christmas concerts. The playing or singing of pieces which have been heard for hundreds of years, pieces of music which each person has grown up hearing. Christmas carols are a tradition shared throughout the whole of Europe with each country having their own versions typical to their culture and traditions. Despite this, there are carols which are shared across Europe as a whole; though the language which they are sung in may differ, the melody and accompanying atmosphere is same. Both the Czech advent matins from the 16th century and the collection of European carols affectively brought the past Christmas choral festivities into the Karolinum, with the performance of carols including In Natali Domini and Omnis Mundus. The performance of these ancient carols in the Karolinum’s Great Hall was flawless. The choir’s voices floating to each note that had been sung by many others previously; carrying on the choral Christmas traditions.

No Czech Christmas choral concert is complete without the mass composed by Jakub Jan Ryba titled “Hej Mistře” (translated in English as “Hail, Master”). Its performance has grown to become a Christmas tradition since its composition in 1790. The mass through its text and music illustrates the familiar nativity scene, with songs dedicated to particular events and characters within the nativity including the angels, shepherds as well as the journey to Bethlehem. The four soloists were Marta Fadljevičová, soprano, Karolína Bubleová Berková, alto, tenor Martin Slavík and bass David Nykl. Similar to the Latin mass the Ryba “Czech Christmas Mass” is in 9 sections; The Kyrie, Gloria, Gradual, Credo, Offertories, Sanctus, Benedictus, Agnus Dei and Zavier. With the title of “mass” used it can be assumed that this piece would be sung in Latin however the “Hej Mistře” mass is written and sung in Czech. This combined with the inclusion of short folk inspired motifs and rhythmic patterns results in a truly Czech Christmas mass.

The Karolinum built in the 14th century proved to be the perfect setting for this concert, both acoustically and historically. Acoustically as the buildings structure , with its high ceiling, stone walls and large open space creating a reverb which carried the voices through hall, mimicking that that would have been heard in churches and cathedrals, where these pieces would have been originally sung. Historically as the Karolinum and Charles University would have both been standing and influential during the time of these pieces composition.

This Christmas concert truly was magical, it bought traditional Czech Christmas choral traditions under the roof of a building steeped in Prague’s history, with the voices of the choir echoing throughout the Great Hall as it has done for centuries. It showed that despite the commercialism which accompanies the festive period, the traditions and choral festivities which truly make a Czech Christmas are still present and thriving.