On Thursday, the 10th of April, the Common Law Society at the Charles University Faculty of Law hosted a lecture in the company of Assistant Professor Arndt Künnecke of the Okan University in Istanbul. A native of Hannover in Germany, but now living in Istanbul, selected a very appropriate title of his lecture Turkey and the EU, a discussion on Turkey’s relationship with the European Union. 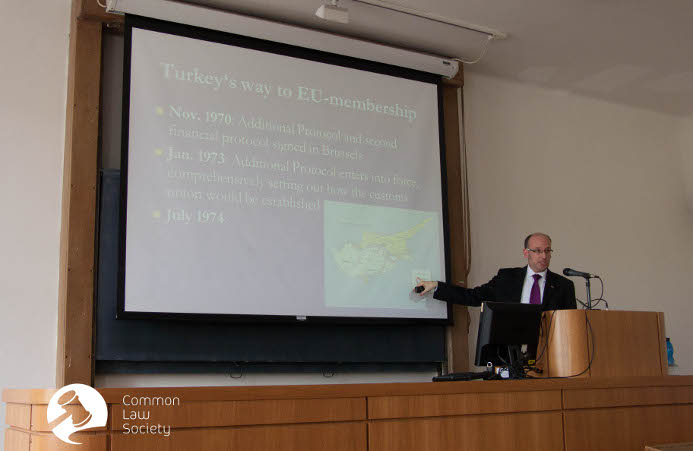 In what was a very informative and interesting lecture Professor Künnecke began by outlining the key events in Turkey’s tempestuous relationship with the EU, from 1923 and Atatürk’s shift towards the west, through EU protocols and military coups, promising agreements and disappointing suspensions to the current situation, where Turkey is an official candidate and associate member of the EU. He effectively illustrated the benefits of the current EU-Turkey free trade agreement with a box of Turkish delights, bought duty-free, and received enthusiastically by the audience. He finished his summary in 2013 with Turkish membership talks still stuck in a bog, if not having slipped into reverse following a shift in Turkey’s priorities with regards to European integration.

In the second half of the lecture Prof. Künnecke outlined the problems facing Turkish accession into the EU, and the numerous arguments used against it. Amongst them are claims that Turkey is not geographically part of Europe, which raises questions about what the European Union is – a geographical entity or an union of shared values; that its large population would immediately make it one of the most powerful members of the European parliament, a prospect not popular with many older members; supposed differences in culture, religion and values that would impede integration; negative public opinion among EU member states who oppose the idea of Turkish membership; the dodgy human rights record of the country, especially its treatment of Kurds, and the lack of freedom of speech; concerns about the power of the military and the separation of powers (or lack of) between the three branches of government; rule of law, especially with the recent sackings of judges and policemen; and of course, the contentious issue of Cyprus.

However, from the Turkish side he also notes that we can also see how 54 years of negotiations have taken their toll on Turkish enthusiasm, with interest in the EU is dwindling. Public opinion in support for EU membership has apparently dropped from 71% in 2004 to 36% in 2012, with Turkey reconsidering whether it wants to be country number 29 in Europe, or country number one in the Arab world.

Prof. Künnecke finished by calling for the EU to be more frank with Turkey and to stop leading her on in terms of the accession talks, and was sceptical of the chances of Turkey joining the EU. However, he emphasized the importance of the current arrangements between the EU and Turkey for governments on both sides of the Bosphorus. A very informative lecture, which drew a clear and concise picture, especially for those with limited prior knowledge of the situation.