It is a nice tradition of the Faculty of Mathematics and Physics of CU to invite their employees, friends and students to a series of gala concerts during each academic year.  By the occasion of the autumn concert on the 21st of October the chamber ensemble Ars Instrumentalis Pragensis performed an outstanding concert within the main hall of the Carolinum. The majority of the Programme consisted of pieces composed by Baroque maestros including Telemann, Heinichen, Lotti, Pergolesi and Zelenka, with an addition from the 20th century composer Eugene Bozza. The resulting concert was a great success with the flowing melodies reverberating within the historical building of Carolinum.

Ars Instrumentalis Pragensis are a renowned Czech chamber group, founded in 1987; their major successes include winning the Instrumental Chamber Competition in Osaka, Japan in 1996. The instrumental make-up of the group can be deemed by some as odd. In general the title chamber ensemble produces images of upper strings: violins, violas, as well as lower strings, cellos and basses, with a scattering of wind but all on a small scale, or instead a group of fairly similar instrument such as an wind quartet.

Ars Instrumentalis Pragensis consists of oboes, a cor anglais, bassoon, Harpsichord and a double bass. Despite the group of instruments being unorthodox it gives this chamber group a depth which cannot be achieved with a normal chamber ensemble; a diversity which allows more freedom of expression and interpretation of the music. The chamber ensemble usually performs pieces by Baroque or early Classical composers, notably often performing pieces composed by neglected Czech composers of the 17th to 18th centuries. Such as Jan Dismas Zelenka, whose piece Trio sonata in C was the final piece performed on the evening of the 21st October.

The concert was a success with an encore performed by Ars Instrumentalis Pragensis, much to the audiences delight.

The first half of the concert saw the performance of Telemann’s quartet in D major, the Trio sonata in B composed by Johann David Heinichen followed by the “Echo” quartet in F by Antonio Lotti. There are many similarities between these performed pieces. The main being that all three of these composers were active during the Baroque era, the same time as the greats such as Händel, Bach and Vivaldi. Despite this there are differences, due to the influences impressed onto the individual composers, for example the echo quartet, possess an distinctly Italian flare through Lotti’s use of the antiphonal texture; a call and response sequence between the two oboes. The two previous pieces composed by Telemann and Heinichen who are more inclined to the Germanic Baroque style stick to the Baroque use of scales arpeggios and figured bass. 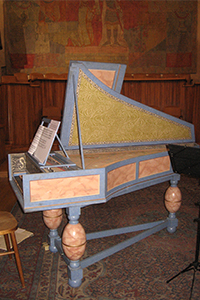 The second half of the concert opened with the Shepherds of Provence, by the 20th century composer Eugene Bozza. This truly was a remarkable piece. The sonorous notes from the cor anglais and the oboe singing through the air of the Carolinum; creating a soundscape which truly reflects the pastoral scenes of the piece. This was followed by Symphony in F by Pergolesi. Interestingly this piece becomes recognisable to the present day audience in the final movement the Presto; the main theme was used by Diaghilev and Stravinsky for the ballet Pulcinella which premiered in 1920. Aptly the concert programme was finished with a piece by the little known Czech composer Jan Dismas Zelenka. Despite being little known to the wider European audience he is hailed as the Czech equivalent to Bach.

The concert was a success with an encore performed by Ars Instrumentalis Pragensis, much to the audiences delight. The music lifted the atmosphere in the Carolinum; the audience intently listening to each soaring melody and harmonic decoration, from a group of instruments rarely heard together. This Concert truly showed why Prague is renowned as a European centre for music. It has been a great pleasure for us that the Faculty of Mathematics and Physics decided to invite this outstanding ensemble for their autumn gala concert and we are looking forward to the next gala concerts the faculty shall organise during the current academic year.