The EU Foreign Policy-making: Is the EU a “Real” International Actor?

What is modern day diplomacy? Is it simply governmental actors pushing agendas? Or it is bigger than that? French professor and researcher Christian Lequesne (Sciences Po, Paris) visited Charles University, the Faculty of Social Sciences, on October 23rd, 2015 to present these issues and discuss his conceptualization of the various forms of diplomacy. 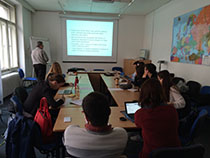 According to Lequesne, diplomacy is the art of negotiation, and how states use negotiation to maximize interests beyond their borders. These negotiations, and means of maximizing these interests take many forms. Modern diplomats do much more than negotiate at formal meetings. New age diplomacy requires the use of new media, and often takes place through informal, less obvious stages.

Lequesne divided his presentation into discussion of economic diplomacy and security diplomacy. As the name suggests, economic diplomacy regards issues that impact international economic relations. In the globalizing economy these issues have a huge impact on a states’ economic standing. In France 1 in 3 jobs depend on foreign investment. As nations develop, there are new actors in economic diplomacy, so it is imperative that diplomats are flexible and reactive.

What sometimes becomes difficult in economic diplomacy is balancing public opinion and economic interests. Lequesne illustrated this with a historical example of France being contracted by Russia to build them massive military boats. When the contract was originally agreed on France and Russia had good relations. Unfortunately, by the time the boats were complete it was clear that they would be used in ways France didn’t support. France was left with a difficult decision. Sell them the boats anyways and risk public outrage or keep the boats, taking a huge financial hit, and end up with boats they don’t need. In the end they kept the boats, in this case the public opinion was deemed more important.

This story raised numerous questions from the audience. Many students believed the public opinion should always be prioritized because it is more likely morality based. Lequesne responded that diplomacy based entirely on morals doesn’t exist. While it sounds nice, it is unreasonable in practice. And while his statement seemed cynical, I think it holds a lot of truth.

The rest of Lequesne’s lecture considered diplomacy for a state’s security. Historically, security diplomacy was the primary focus of diplomacy. Since humans began settling in communities they have been concerned about developing a sense of security, whether that be through building walls or forming militaries. Nowadays our economic ties have diminished the need for as much focus on security diplomacy. There are however still regional and collective security processes for security reasons, NATO, OSCE, the EU, and the Shanghai Cooperation Organization to name a few.

The point I founded most interesting about Lequesne’s section on security was his discussion of nuclear weapons. Nuclear weapons, he claimed, are a new element of security. Nations don’t have them to use them, by having them they have security. They serve as deterrence.

This event, and events like these, adds a lot to my Charles University experience. The opportunity to pursue learning from and networking with experts outside of Charles University is exciting for students wanting to get the most out of their time here.