A year ago, Charles University launched PRVOUK, a set of programmes offering scientists and scholars the opportunity for interdisciplinary co-operation and intergenerational research teams. How successful was the launch of the dialogue between disciplines and generations in the programme entitled History in Interdisciplinary Perspective? Doc. Marie Šedivá Koldinská, a member of the programme's board, explains. 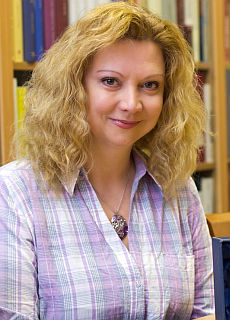 Could you briefly introduce that part of PRVOUK in which you are involved?

The joint name that has been chosen, History in Interdisciplinary Perspective, was the one closest to what was our main objective, i.e. to bring together representatives from diverse disciplines from history, archaeology and archival studies to linguistics and art history to librarian studies.

The first conferences that have been held so far have definitely shown that this interdisciplinary approach can be applied with success and can be very beneficial for contemporary science and research at Charles University's Faculty of Arts.

Since we started to design the programme, we have been extremely interested in being able to build teams of mixed generations, that requirement being explicitly rooted in the very principles of PRVOUK. The fresh experience I have from a conference on the Czech Bible shows that we have managed to involve young colleagues in the programme. Some made a direct contribution to the conference with their own speech, others have been helpful in organizational matters and preparation of publications. We want them to get used to the fact that this, too, is part of science. 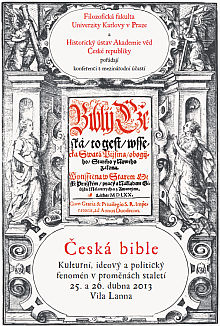 Looking back on the past year since the programme started, what conferences have been held and what publications have appeared?

Our colleagues from the Institute of Archaeology held a conference entitled Archaeology and the Public), a brilliant idea to avoid looking only inside the academia and opening up instead.

As I have mentioned, this April saw a conference entitled The Czech Bible. Cultural, Ideological and Political Phenomenon Throughout the Centuries. A conference is scheduled for this autumn, entitled Political Culture or Political Cultures in Interwar Czechoslovakia? Both these conferences will result in publications in the form of monothematic issues of the journal History, Questions, Issues published by the Institute of Czech History.

Moreover, several important monographs have been published under the programme. Richard Biegel of the Institute of Art History introduced a magnificent monograph Mezi barokem a klasicismem (Between Baroque and Classisicm). Prof. Martin Rychlík of the Institute of Czech History has contributed with a book titled Rozdělení Československa (The Split of Czechoslovakia). Titles soon to be released include a joint effort by prof. Jan Royt and doc. Michaela Ottová of the Institute of Art History, Středověké malířství a sochařství v expozici v kostele Nanebevzetí Panny Marie v Mostě (Medieval Painting and Sculpture On Display in the Church of the Assumption of the Virgin Mary in Most) as well as a large collective monograph Základní problémy studia raného novověku (Basic Issues in Researching Early Modern History), authored by a team of authors under my leadership.

Those involved in our programme also include fellow scholars who are not directly affiliated with history-related disciplines, instead coming from interdisciplinary fields revolving around a specific area or culture (e.g. Balkan studies, Central European studies, or Ibero-American studies) with whom we have found common interests in science and research.

Looking at it this way makes it evident that historical research is covered by more than the three history-related CU FA departments (Institute of Czech History, Institute of World History and Institute of Economic and Social History), which would normally be the automatic answer to your question. History, effectively and organically, permeates through all the humanities-oriented faculties. This fact reflects the plurality of approaches to research, and it is very important that historical research is not restricted to our department and is done elsewhere, if in a different way.

It has turned out that mutual interdisciplinary communication is possible, and the conferences held under the programme bring deeper personal relations among scholars who until now have known each other only by name. Hopefully, co-operation across disciplines will bear fruit in the future.