Life in Vysočina: An interview with Pastor Filip Boháč

An interview with Pastor Filip Boháč

It’s always hard to be the youngest at something… or is it? Twenty-seven year old Filip Boháč, one of the youngest serving Protestant pastors in the country, would disagree. He says his age and approach has helped more than hurt in clearing the cobwebs and serving his congregation at a small village parish of Opatov in the Czech-Moravian Highlands.

He may have surprised some locals, especially with his love of heavy metal, but they quickly took to his approach and in any event were glad to have received someone new. 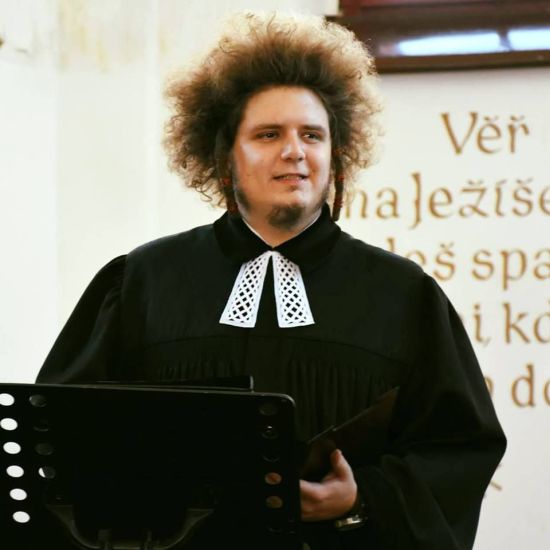 “The last time they had a pastor here was more than 20 years ago, Jaroslava Soušková from 1992 – 1995. I think that the local congregation had just about given up on ever seeing a new candidate and were glad there was any interest. I certainly hope that I have met their expectations since.”

How many people attend services at your church? Opatov is, after all, a small village numbering just 199 inhabitants…

“During 2018, I think the average was about 18 people; there are 94 members on file. I see around 30 of more or less same people from the congregation at various church-related events, which is pretty decent. Basically a third of all the members. As for who members are, the norm is ‘seniors-pensioners’, while around half are a little younger – in their 50s and still working. There is a big gap from the ages of 18 or so and around 30. Our youngest members are schoolchildren.”

What is the history of the village parish?

“The Opatov parish is related to a reform branch of Protestantism. At first, the only such congregation was in the village of Moraveč near Pelhřimov, headed by the Hungarian preacher Jan Szalatnay. The one in Opatov dates back to 1863. First they bought a farmstead and turned that into a parsonage (where I now live) and the church was built in 1868. For a long time the village was only Protestant. The 20th century saw the arrival of new residents who were members of the Roman Catholic Church. Today, families are mixed and any rivalry between Protestants and Catholics, has thankfully long been buried.”

It is a Protestant church…

“Yes, following strict Calvinist tradition, which means you won’t find candles, paintings, statues, frescoes, or reliefs inside. The only thing inside are Biblical verses on the walls, pews, a church organ, cobwebs and a preacher’s pulpit with a small table. Older members will still remember the rejection of dance, Christmas trees, Advent wreathes, and other things. I have actively fought against such ‘bans’ and slowly but surely I think I have made progress.”

What are the locals like? From what I can tell in Vysočina (The Czech-Moravian Highlands) there is a tradition of closed farmsteads with inner yards in many villages.

“That’s exactly right. Vysočina is a region where a lot of people work in traditional fields, such as agriculture, forestry and so on. The life of the congregation is influenced by the agricultural season: more people attend church in the winter months when the ground is frozen; as soon as warmer weather people are digging all the time.

“One big plus is that locals don’t expect me to be able to take care of the parsonage on my own: they understand that someone who studied to be a preacher probably won’t know all the ins-and-outs of plumbing, masonry, and so on. I am really grateful to the way they have helped me with repairs. Likewise, the locals are happy when I also succeed at making something, like planting a fresh seedbed or doing a bit of landscaping on my own.” 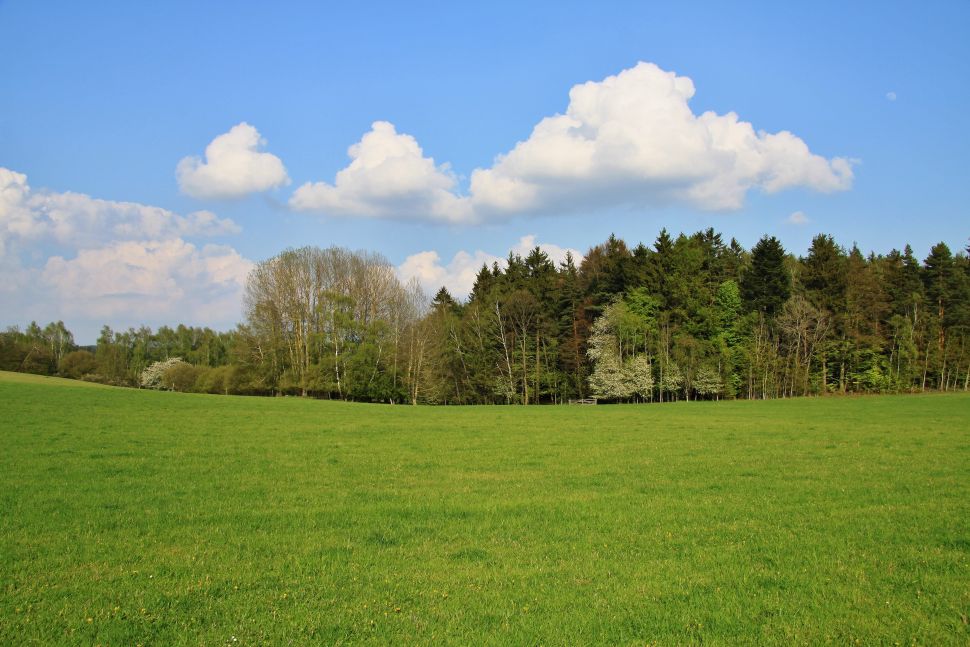 What influenced your decision to become a pastor?

“To a large degree it is the openness of our Church: The Evangelical Church of Czech Brethren is accepting of clergymen and women even if they are not traditional – the Church doesn’t try to squeeze us into a single ‘acceptable’ model. Of course there are limits, but I think they are well set.

“Second, was life at Charles University, where you gain new friendships, learn about the history, gain a new understanding of ethics, learn about new religious groups and so on.”

Much has been made of the fact that you are just 27. That makes you one of the youngest pastors in the entire country. How does that feel?

“I am enjoying it greatly and I admit it was one of my aims: to complete studies at the Protestant Theological Faculty in the shortest possible time. I wanted to get ‘out of the starting blocks’ as quickly as possible to begin working as a pastor among people. I see my age mostly as a positive: it’s true I feel closer to younger people than older colleagues but there are certainly exceptions.

“Above all, I like being outside my ‘comfort zone’ which paves the way for now discourse and discussion, and that is made easier by my age. It’s true that I break any stereotypical mould of a parish priest. Young people see it as something unusual and seniors kind of treat me like something of a grandson.

“The only time it has been a little bit of a disadvantage is when officiating at a wedding. All of the couples have been older than me so far! For some, being younger can be a barrier but I think it is a needless bias. Once just has to look at the Czech president to see that age is to no guarantee of quality - or competence.”

A profile of you by Esprit (a supplement magazine in the broadsheet Lidové noviny), suggested it wasn’t just your age but also your appearance as well as love of heavy metal that set you apart, at least in some peoples’ expectations.

“I am maybe a little eccentric in appearance but it hasn’t had a negative impact. At the vicarage there was an old granny who used to always pull me by the dreadlocks – for good luck, she said. Otherwise, in terms of clothing, I don’t conform to any kind of heavy metal dress code or anything like that.”

Heavy metal used to get a bad rap in some religious circles, or still does. But then a lot of older members in their, erm, 50s, now grew up with heavy metal, so I guess that isn't a problem. If we leave aside Ozzy or Iron Maiden, what about Christian metal bands? Some suggest Christian metal is an oxymoron… is it?

“It can certainly seem so: the Finnish sociologist of religion Marcus Moberg calls it a “double controversy”. Double because secular metal is suspect for many Christians. The first Christian metal bands had an evangelising mission – they wanted to express what they themselves were experiencing and to spread the word. That was unacceptable for some, who dismissed any heavy metal as flirting with occultism or drugs and so on.

“Of course traditional metal is full of opposition to traditional institutions such as the government, organised religion, the education system, bureaucracy and so on. But there are some things in common: one of the messages in heavy metal music, that there is something wrong with the world has a parallel in the Old Testament and prophets through whom Hospodin (God) delivered his message that ‘change’ was needed.

“There are Christians who are heavy metal fans but [also want to worship without prejudice] and founded, for example, ‘metal churches’ and congregations such as Sanctuary Int. and The First Metal Church of Christ.

“For some Christians, though, a person in a heavy metal t-shirt is still someone who should not be trusted or should be avoided.”

I like how you say that every person can experience their belief or their relationship to God or Christ differently: faith doesn’t have to be experienced solely through quiet moments of contemplation or reflection. For some, music - even heavy music - can be cathartic…

“How we behave and react is governed by the prefrontal cortex in the brain linked to concentration, decision-making, planning, impulse-control, and motor function. Look in any classroom and you see there are some kids who have trouble focusing or sitting still.

“Everyone is different and there are some people with say a more active prefrontal cortex who benefit a bit more from normal release valves, namely activity, be it swimming, going for walks, driving, jumping to the beat at concerts, playing instruments and so on. Someone like that is bound to suffer in moments of meditation although I think that even those who are hyperactive too can find and moments of calm and reflection, be it in the midst of activity.

“I myself experience similar moments when my body is fully engaged, such as when I am driving or enjoying a live performance with thousands of fellow music fans, feeling the music pulsing through my body. If you add to that that we also have Christian metal band concerts attended by fellow Christians, who know the lyrics or share some views with the performers, that’s a great feeling!

“Ora et labora is a Benedictine motto which means pray and work. On their own, each is dysfunctional – you need both. Inner reflection and philosophizing is amazing but is best when combined with activity. Actions follow words and words follows action. Some people are just a little more inclined to labora, that’s all.”

When it comes to Christian heavy metal, are there any bands you would recommend?

“Absolutely. I would recommend progressive power metal from the United States – Theocracy or metalcore bands like August Burns Red or The Devil Wears Prada.”

If we leave out the obvious, music or the Bible, where else do you find inspiration?

“Lately I have been fascinated by the crossroads where theology and psychology meet. I enjoy a program called Diagnóza F on Radio Wave, as well as follow media such as DVTV where there have interviewed psychologists. I get a kick out of areas where secular fields and theology meet.”

How long will you be in Opatov in all?

“I have two-and-half years left before I move on. After that, I think I would like next to serve in a bigger town in Bohemia.”