On January 13, 2011, the new publication Bohemia Jesuitica 1556-2006 was introduced at an event that took place in the ceremonial halls of the Karolinum building. The aim of the book is not only to commemorate the 450th

According to the Dean of the Charles University Catholic Theological Faculty, Dr. Prokop Brož, who opened the ceremony, the book shows that history of religion can be interpreted differently than it used to be in the past 200 years.

Among the guests were members of the academic community, the Catholic Theological Faculty, the Czech Province of the Society of Jesus, the Karolinum publishing house, and notable astronomers, historians, art historians and other scholars. They were greeted by Rector of Charles University, Professor Václav Hampl.

“The role of Jesuits in the history of Charles University is significant and was essential especially in the 17 th and 18 th centuries. They played a key role in overcoming of the long and chronic crisis at the end of the Middle Ages. They contributed not only to the fields they are traditionally connected to, such as theology and philosophy, but also to the fields of natural science, such as geography or medicine. The publication we are launching today and the conference that preceded it, have been one of the most important scholarly works of the Catholic Theological Faculty in the past years. The feedback from the conference and the volume itself prove that it is a great achievement on an international level.”

The 1512-page publication was six years in the making and contains 10 chapters in 7 different fields of humanities and social sciences, written by a team of over 100 authors. It is being published in two volumes that collect papers from an international conference hosted by the faculty in April 2006, attended by 120 presenting speakers from 15 countries and 3 continents.

“In history, it is impossible to ask for an objective view”, said one of the editors, Professor Mojmír Horyna from the Institute of Art History of the Charles University Faculty of Arts. “We are always present in a particular point in history and we are observing it from the inside. It is therefore impossible to consider history an object of study independent of us. Changing times therefore change our perspectives, which are moreover deliberately skewed by political and other interests, and new questions appear. The writing of history is a never ending labour, but while we are writing it, we cultivate ourselves and become what we are supposed to be – become what our creator intended us to be.”

Dean emeritus of the Catholic Theological Faculty and the spiritual father of the book, Professor Ludvík Ambruster, described it as a “reconciliation of the nation’s history”.

“Each university will have to have a copy of this collection”, said Professor Ambruster. “Each thesis about Jesuits will from now on have to refer to it as a source of knowledge. The book is not an apotheosis of the Jesuit order – they were people like everybody else, with good and bad experiences and good and bad sides. But hopefully, these volumes will help us approach Jesuits without prejudice and better understand the history and influence of the order in Bohemia.”

The Bohemia Jesuitica 1556-2006 book was given to Pope Benedict XVI as an official Christmas present from the Czech Republic. 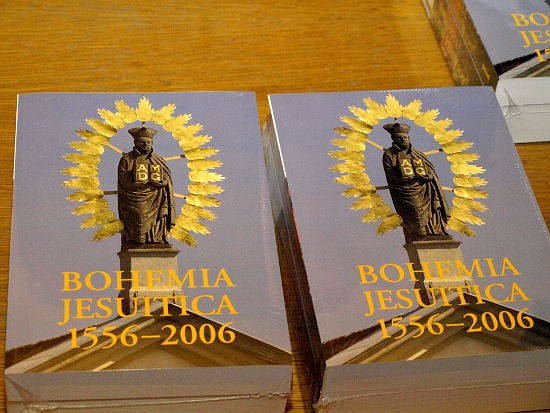