One step further into the life of Charles IV 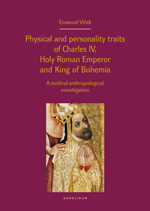 The year 2016 marks seven hundred years since Charles IV’s birth in Prague, yet his presence is still very much felt around the city. Charles Bridge and Charles University are the two best known monuments founded by the King and a quick walk around the cobbled streets shows that he hasn't and won't be forgotten any time soon. Statues, souvenirs and multiple exhibitions of this year prove that Charles IV is seen as an esteemed symbol of Prague's deep history, one that locals and tourists alike find relevant today.

Research conducted over the last century has brought historians closer than ever to uncovering the secrets of the King‘s time in Prague, and with it truths about his life as a man in the fourteenth century. In 1978, the six hundredth anniversary of his death prompted a medical investigation of his remains, which brought about surprising findings, including the cause of his death. To mark the occasion and commemorate Charles IV‘s life this year, Professor Emanuel Vlček's skeletal research book from 1978 has been translated and published in English for the very first time.

Packed with an accurate breakdown of Charles IV’s physical traits and beguiling stories on the former King, Professor Vlček's book delves further than we've ever seen into the illnesses and tribulations of Prague's beloved monarch. The 50-page book is broken down into multiple sections on his physical appearance, injuries and the diseases he suffered with during his lifetime, whilst scans showcase the injuries inflicted on his skeleton, with detailed assumptions of how they were caused, as well as unique images of Professor Vlček presenting his findings to colleagues at Charles University. Images of the King‘s skeleton give the reader intimate details on the wounds he suffered from as well as his deteriorating health as he aged from a young man into a senior.

Whilst the main focus of the book is on the illnesses of Charles IV, its pages are riddled with interesting facts and speculations about Charles IV’s lifestyle. Alongside the King’s famous personality and physique, you can find minute details about him that you would never otherwise come across, including suspicions about poisonings, cover ups and battle wounds inflicted in times of war.

In particular, one chapter explores the rumour that Charles was poisoned during his reign, leaving him deathly ill and bed bound for a few months. During this period many people confessed to the crime, including his wife, however no one was ever charged. Speculations arose that the possible poisoning was a coverup for injuries he sustained whilst duelling, a feat which was unbecoming to a royal monarch and frowned upon by the Pope. Snippets from other publications and letters written to the King are also referenced in the pages of the book as support to these findings.

Published by Charles University’s publishing house Karolinum Press in 2016, the book is well translated and easy to read. Some phrases are difficult to understand from the average eye however this doesn’t distract the reader from the focus of the book.

A must-read for history fanatics and Charles IV admirers, the Physical and Personality Traits of Charles IV, Holy Roman Emperor and King of Bohemia is an insightful read for anyone looking for a glimpse into the King‘s life and the struggles he lived with during his lifetime.