says Myanmar - in transition - has not yet reached final goal

Myanmar’s Aung San Suu Kyi has begun a three-day visit to the Czech Republic. After meeting for talks with the prime minister, Ms. Suu Kyi was hosted by Charles University on Monday afternoon.

Shortly before three pm on Monday, a motorcade of shiny diplomatic and police vehicles wound its way through the old town to the Carolinum, the heart of Charles University, where Aung San Suu Kyi and her delegation were expected and where they were greeted by Rector Tomáš Zima and other university representatives. 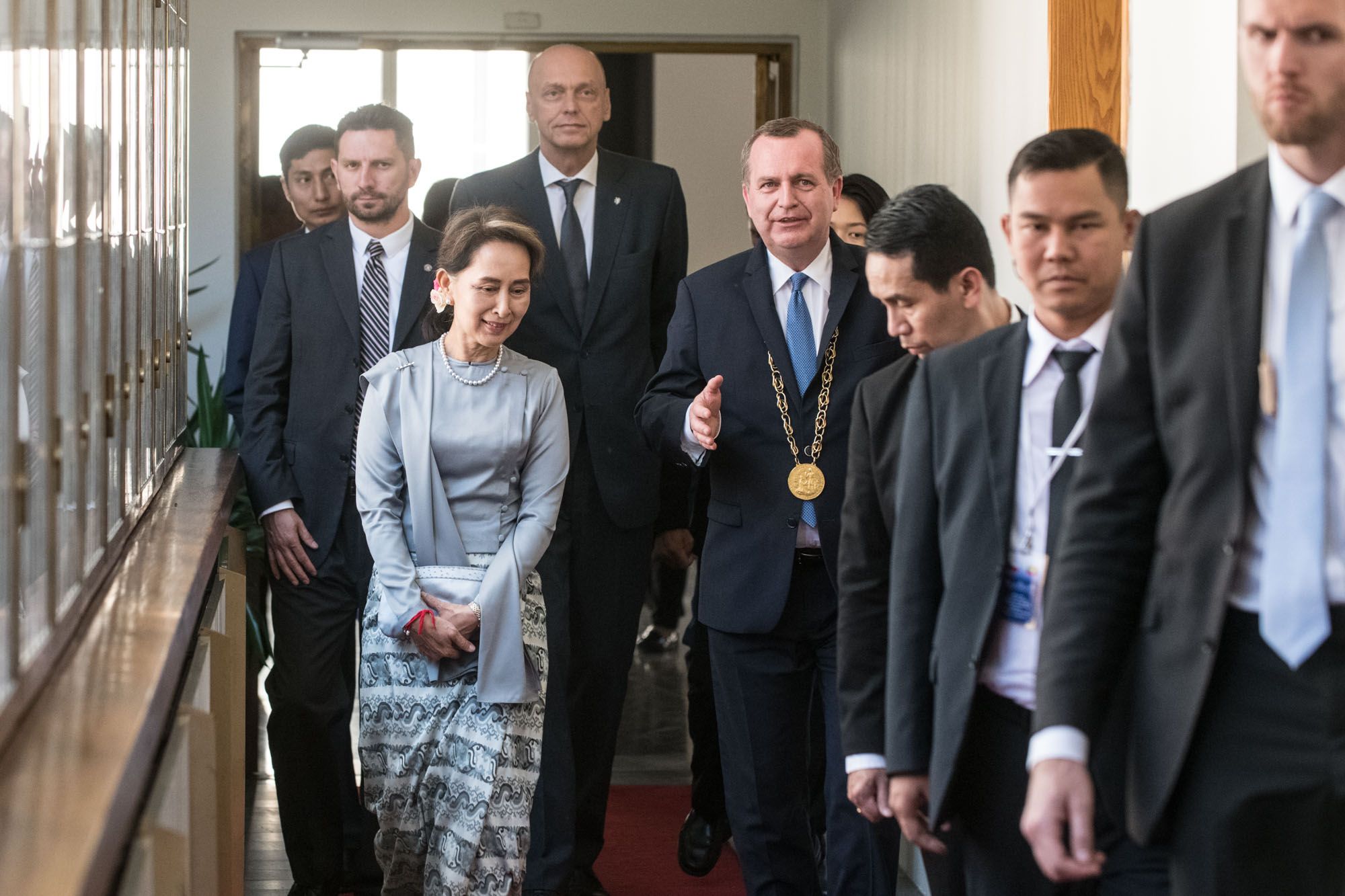 After a short tour, Myanmar’s 1st State Counsellor entered a packed Patriotic Hall at the university where, after a brief introduction, she stepped up to the podium talk about her country’s often staggered transition to democracy.

Speaking next to a famous portrait of Czechoslovakia’s first president, T. G. Masaryk, Aung San Suu Kyi acknowledged for numerous reasons the path had not been easy; she outlined a process that was now in its fourth decade, yet Myanmar, she said, had “not yet reached the final goal”.

She described a brief history since 1988 through which Myanmar had gradually moved forward, but made clear that hurdles remained, explaining that the country’s constitution was criticised as one of the most rigid in the world. She stressed that constitutional reform remained one of the main priorities for her party (the National League for Democracy). 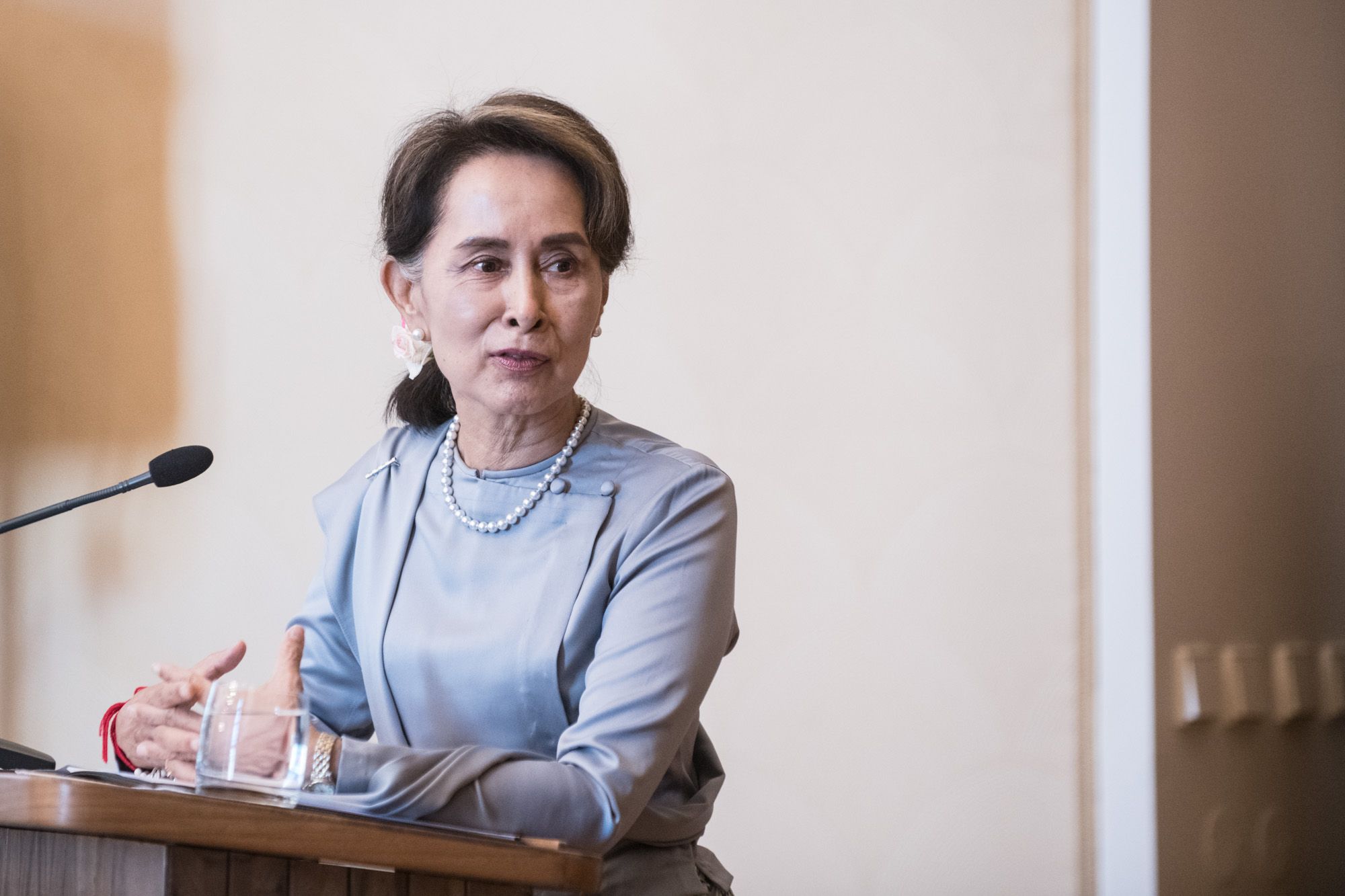 She also stressed the importance of the peace process by the Myanmar government “to bring an end to the fraternal strife” that she said had been present since independence.

According to Aung San Suu Kyi, in a country as ethnically diverse as Myanmar, making unity out of diversity was a “multi-faceted challenge”. She said three peace conferences had been held since her government took office in 2016 and was – in her words – constantly negotiating with almost 20 armed ethnic organizations so that they might “all be able to join in federal democratic union”.

Ms. Suu Kyi also briefly discussed Rakhine State but soon shifted to improvements and crucial changes the government had implemented since taking office. The lives of many of the country’s citizens, she said, were markedly getting better and she outlined infrastructure improvements which enormously impacted the quality of life: a new availability of clean water, all-weather roads, and electricity. 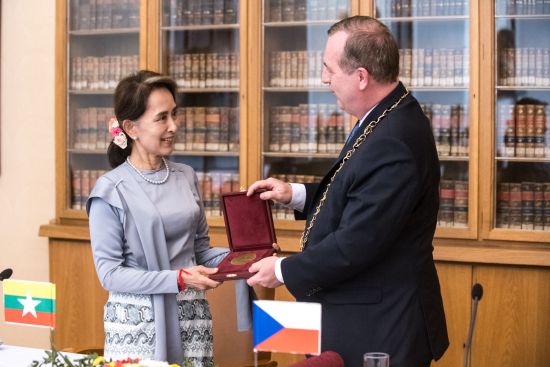 She also stressed her government’s dedication to education; a light-hearted moment came after Ms. Suu Kyi said Myanmar’s boys were somewhat slower learners and Rector Tomáš Zima quipped that Czech boys were maybe also in a similar situation but “had survived”.

The importance of education at all levels was addressed in a brief Q & A period which followed.

On the occasion, Aung San Suu Kyi was also awarded a commemorative medal by Rector Tomáš Zima marking her contributions for which she had been also awarded the Nobel Peace prize in 1991.