A Visit to the Past – An Unusual Erasmus Trip

Český Krumlov is a Czech town which may be small in size but is nonetheless significantly important. This well-known destination, famous for being a UNESCO World Heritage Site, is situated on a hilly riverside of the Vltava River, whose meanders form a typically picturesque surrounding to the scenery of Český Krumlov. This stretch of the river is very popular among canoeists and rafters, who come to South Bohemia every summer to enjoy the nature and other attractions of the region, Český Krumlov included. The town also lures tourists with its typical architecture, such as the narrow streets and buildings decorated with scraffiti. The State Castle and Chateau of Český Krumlov is a Czech architectural jewel. However, it is the Fotoatelier Seidel, which we visited on our trip with the Erasmus Club of the Faculty of Arts, that is the real, yet hidden, treasure of the town. 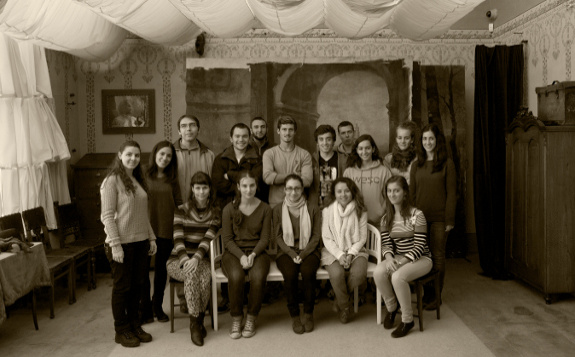 The Fotoatelier Seidel is situated in a detached house which would go unnoticed if it wasn’t for its greenhouse-like roof which was necessary for photographing before the town was electrified. The building was adapted for this purpose in 1905 and, as well as the atelier itself, it also contains a reception room, a darkroom, a room for daylight photo-copying and other rooms needed not only for the process of photo production, but also for the daily life of the Seidel family. Josef Seidel and his son František turned the small family firm into a prosperous business. After his father’s death in 1935, František took over the fotoatelier and sustained the success of the business. Nevertheless, soon after the Communists took power, František was forced to close the business down. Therefore, the Fotoatelier stayed preserved in its original form from 1949, until the year 2005 when the building was bought by Český Krumlov Development Fund and converted into the museum which stands today.

The Erasmus Club visit to the Fotoatelier Seidel was a rather interactive one. After a short film on the history of the Seidel family and the atelier, we had a guided tour of the house and discovered its secrets. We smelled the old odour of thousands of negatives and customer-records in the attic, we saw the beautiful decorations on the walls in the dressing room, which no doubt helped customers to relax and overcome their fear of the camera (as it was often their first time to be photographed ever!), we touched photo paper and guessed which of its sides was meant to be exposed to light (it was the rougher one); we simply felt like we were on a trip to the past and we relished every moment of it.

Probably the best part of the excursion was the darkroom where we were shown the whole process of classical photo making. It felt like a real adventure: a dark lab with mysterious equipment where seconds play a vital role, chemicals are everywhere, and just a tiny beam of daylight might destroy everything. The appeal of our digital cameras suddenly radically diminished. We also enjoyed posing for a group photo among the original decorations in the atelier. Although we did not really have time to dress up in the costumes from the 1920s (which would usually be lent to the visitors), nonetheless we left with a nice photo to cherish the memory of our visit to the fotoatelier.

The Erasmus Club trip to Český Krumlov was a complete success. The weather, the town and the jovial atmosphere among students were truly pleasant. Despite seeing the “classic” focal points of the town at their finest, for the majority of the group the most unique and unforgettable part of the day was the excursion to the Fotoatelier Seidel, a place where time certainly stood still.