and commemorate Opletal and others killed by the Nazis in 1939

Across the country, Czechs have been marking the 30th anniversary of the Velvet Revolution in 1989, as well as commemorating student Jan Opletal and others murdered by the Nazis on the same date 50 years earlier.

On November 17, 1989 riot police brutally cracked down on students who had held a peaceful rally from Albertov (the site of Charles University’s Faculty of Science) to Narodní třída in the city centre. No commemoration of the dramatic events of the 17th that sparked the beginning of the Velvet Revolution (and would end more than 40 years of communist rule in Czechoslovakia) would be complete without the traditional retracing of the students' original route from Albertov to Vyšehrad to Prague’s Narodní třída. 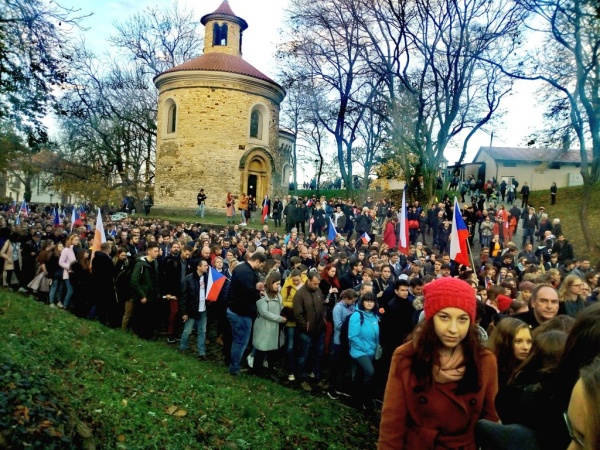 Students at Charles University organised the event at Albertov this year as part of the Svobodný listopad festival. Forum spoke to one of the organisers, Petr Bouška of H21, a democratic initiative also commemorating November 17 within the broader umbrella event called the Festival of Freedom. 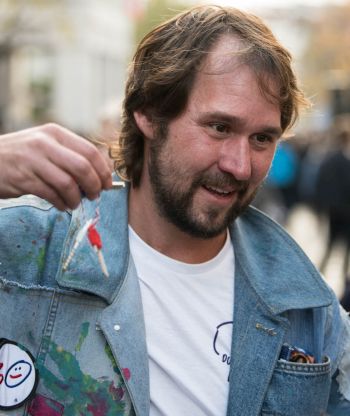 We want to say that we are ready to continue the fight for democracy… democracy is something we need to cherish and we have to keep freedom in our hearts. If we forget to take care of democracy, it can vanish. Look at the Czech Republic or even the US: societies are becoming more and more polarised, fewer people now trust in liberal democracy and democratic values. We need to save democracy again.

Many attendees, from university students to families with children cited current threats to democracy – from increasing populism to a disregard for democratic institutions – as current reasons to attend and not just to remember the past but send a broader message today. Democracy was not something won 30 years ago that could now just be left untended, suggested actress Lenka Krobotová from Prague’s Dejvice Theatre and Olympic silver medal-kayaker Vavřinec Hradilek when they spoke to Forum on Sunday. 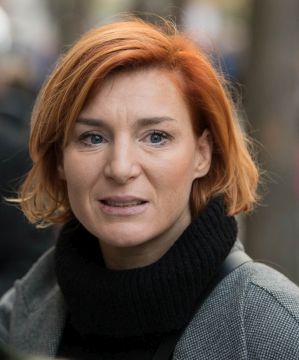 LK: I think it is very important to remember the events of 30 years ago every single day. It’s important to tell children and those growing up what democracy and civic society means.

VH: I think it is important to think about the current situation around the world and it’s great to see so many young people in the streets. 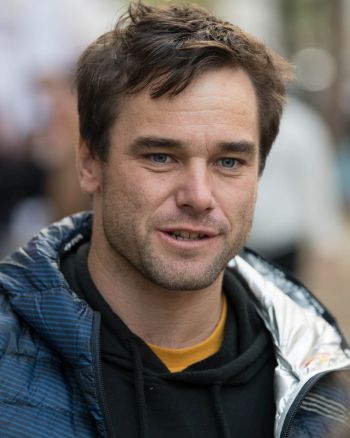 Many in attendance were carrying Czech flags or sporting pins featuring the late playwright and dissident Václav Havel (who was a driving force in the revolution and was later elected Czechoslovakia’s first post-communist president). Many were students, among them Julie Mikulová (not pictured), in her first year at CU’s Hussite Theological Faculty in Prague:

A lot of people are here and a lot of people are talking about it and it’s great that the events of not just 30 years but also 80 years ago are not forgotten. The day brings people together and it is important we remember and remind ourselves of what happened. I was born in 1998 so I didn’t experience these events first-hand. That doesn’t mean they aren't important to me: I heard about them at home from my parents and grandparents and I am grateful it was something we discussed a lot. 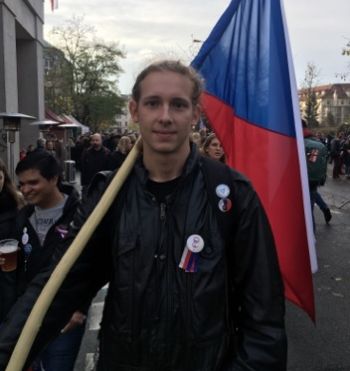 Jakub Machek, 19, a student at the Faculty of Education at Palacký University Olomouc, echoed the feeling expressed by many that over the last few years democracy has increasingly come under assault.

I am attending today because it is officially International Students’ Day and the Struggle for Freedom and Democracy Day and a state holiday commemorating the events of ’39 and ‘89. In 2019, I will be happy if we will not have to fight against anything similar: I’m talking about the situation in the government and also at Prague Castle. Truth and facts are something that used to be accepted by broader society but are now challenged or manipulated at every turn. So it seems to me, there is still plenty to defend against. 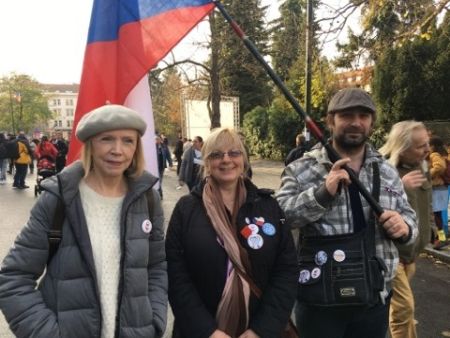 Students and millennials from Prague were not the only ones to retrace the march on Sunday; some, like Zdeňka Nikodýmová (who attended with her adult son and her sister, Jitka Schiff) said for her the day was more a look back on what happened 30 years ago – a seminal moment in Czechoslovak history when everything changed.

ZN: I couldn’t take part in this march 30 years ago because I was home with my children who were very young. For me this is a commemorative act. It’s also more than that: it’s a chance to meet people along this route, who were here in ’89, to hear what they experienced and what it was like to have been in the thick of it. So new meetings and remembrance.

JS: I wasn’t in Czechoslovakia at the time of the Velvet Revolution 30 years ago: I had had to escape communism. I was living in Australia, which was very far removed, at least when it came to the news. I have only been back six years now so I wanted to experience a bit of the mood here at Albertov. I am extremely grateful for what the students and the whole country achieved back then.

The past week has seen hundreds of events around the country marking the 30th anniversary of the Velvet Revolution. At Charles University, these will culminate on Sunday with a special concert for invited guests at the university’s historic Carolinum building.