Six students of the CU Protestant Theological Faculty enjoyed an unconventional summer: thanks to the international Lautenschläger Azekah Excavation Project, of which the faculty is a member, they travelled to the newly opened archaeological dig of Tel Azekah, not far from Jerusalem. Amongst the group was RNDr. et Bc. Jana Křížová, who had previously studied, and also works in, physics; however, as she is also active in her church, she decided to study theology. Studying in places mentioned in the Bible was a great challenge. 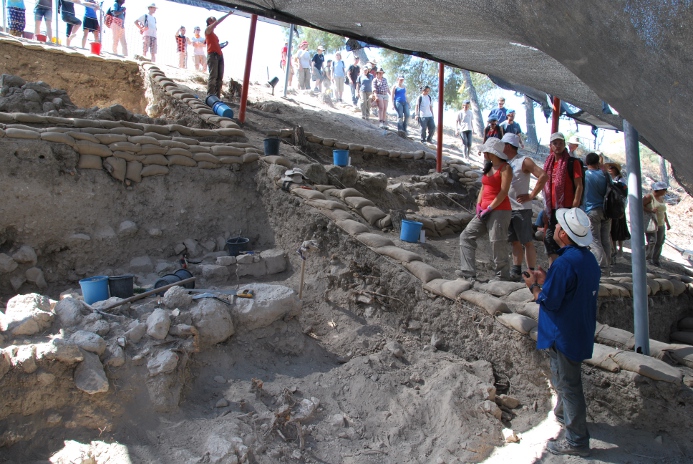 In the spring you were successful in a selection process organised by the CU Protestant Theological Faculty for students of Czech universities, giving you the opportunity to go and work at the Tel Azekah dig, at the location of an important economic centre of the Kingdom of Judah (10th -6th century BC). What is a normal working day like at a dig of this importance?

We got up at four in the morning. Before we left our camp we had tea or coffee, then left at half past four, when a bus took us to Azekah. When we got there it was still dark, so, by the light of the vehicle headlights, we gathered buckets, pickaxes, brushes and other tools then went to work at our allotted places. The sun rose quickly. At nine o’clock we had a big breakfast, after which we worked till one. Once we returned to camp, we first washed the shards we’d found the day before, and only then did we have lunch and a break.

Starting at five o’clock there were voluntary lectures. These lectures were always well-attended, as they were genuinely interesting, and given by many renowned professors from across the world, as well as post-graduates from the University of Tel Aviv. Naturally, the themes of the lectures were related to archaeology, while at the same time being quite varied. We found out, for example, what we can learn from pig bones or from the examination of the patina on coins.

Further lectures were held after the evening meal. These were less well-attended; the working day was, after all, quite demanding, and people were thinking about having to get up the next day.

Every Tuesday afternoon we also went on an excursion to other digs in the area. We had Fridays and Saturdays off; I took the opportunity to visit Jerusalem and Tel Aviv. 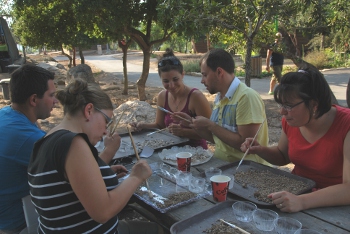 What were the work teams like at the dig? Did you forge contacts with students and scientists from other countries?

We were divided into seven work groups, each of which had its own defined area of the tel (‘tel’ is a word for an artificial hill created through the gradual building, settlement and fortification of a particular place - Ed.). A total of around a hundred people from various countries were working on the dig. There were large groups from Australia, the USA and Germany, as well as smaller groups from Asia, South America, Canada, South Africa and other countries. While the majority were students of archaeology, theology and history, I was surprised how many people were there ‘on holiday’, because archaeology was their hobby. For example, I shared a hut with German judge who must have been in her fifties.

I was amazed at how well-organised the work was – there wasn’t any downtime. It was run almost like a military organisation. Everyone knew what they had to do. You worked on command, you had to drink when it was warm on command, you went for a snack on command and you went back to work on command.

You were in Israel when temperatures were at their highest. How did you cope with this with your demanding workload?

Work is carried out on the digs in summer for two reasons: first, because it’s the holiday period and students have time, and second, because it doesn’t rain in Israel at that time of year – and rain would otherwise make the work very difficult. During the night and early in the morning it was quite cool, and as soon as the sun appeared, the temperature went up quickly. We worked in the shade, underneath canopies; otherwise it wouldn’t be possible. We had to drink lots and lots of water to keep going. The work was hard, because most of the digs were newly opened, which meant manually digging up and carrying away large amounts of soil; luckily the soil wasn’t too hard. On the other hand, the ‘dry patch’ meant that there was a lot of dust, and we had to keep cleaning everything. The dust was everywhere and we couldn’t get rid of it.

Once we came across spots where there were structures, walls, floors and ceramics, we worked more carefully, changing our pickaxes for small brushes.

You also arrived at Azekah equipped with a lot of geographical instruments; how did you use them to uncover the secrets of the place?

I took a kappameter to measure magnetic susceptibility. This is a useful instrument for archaeologists as it can detect whether a test sample of soil has been exposed to radiation. In the places I measured, however, the there was relatively little burnt soil, so in the end I didn’t actually discover anything with the instrument.

I spent a lot more time measuring magnetic fields with the aid of a proton magnetometer, an instrument used by archaeologists to discover structures hidden underground. The method is suitable for initial surveys in areas where digs haven’t yet started. I measured in the areas surrounding open locations and I hope that the results can contribute to decisions about continuing digs into next season. 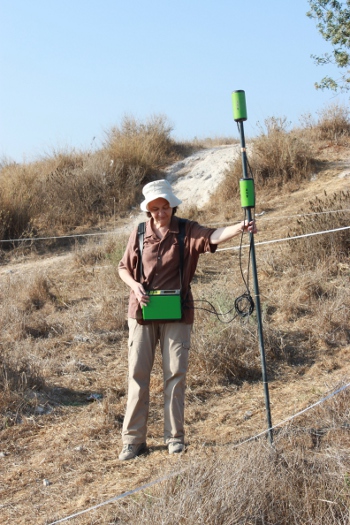 So what was it that led you from physics, your first subject, to Protestant theology?

I’ve been active in the Methodist church since I was young. Several years ago I became a minister and was entrusted with our church’s congregation in Brno. Having already completed an internal church course in theology, I decided to take a more thorough approach to theology, so I applied to join a course at the faculty. I really enjoy studying.

Which discovery in Azekah made the biggest impression on you?

I was working at a location where we found a lot of walls, and the experts couldn’t agree what period they came from. It’s quite hard to date rocks if you don’t find any pottery shards nearby.

One major event was when we found a human skeleton at a secondary location. Experts took DNA samples, which are now being tested in the laboratory. More generally, all notable bones, parts of vessels and other items found during the summer will be subjected to close examination and evaluation.

You and your colleagues from the Protestant Theological Faculty stayed in Israel for four weeks. You visited other archaeological digs and travelled in the country. What made the biggest impression on you?

I said to myself that when yo look at places that have been inhabited for thousands of years, you can gain a closer understanding of what is written in the Bible. But what probably connected with me more than the fact that I had worked in places associated with stories told in the Old Testament were the meetings with contemporary people, be they from Israel or elsewhere, who worked with me in Azekah. It was an interesting experience.