The Visual History Archive: Change and Education in the Palm of Our Hands at CU

“The Institute’s Visual History Archive preserves history as told by the people who lived it. Each testimony is a unique source of insight and knowledge offering powerful stories from history that demand to be explored and shared. In this way we will be able to see their faces and hear their voices, allowing them to teach, and inspire action against intolerance“ - USC Shoah Foundation 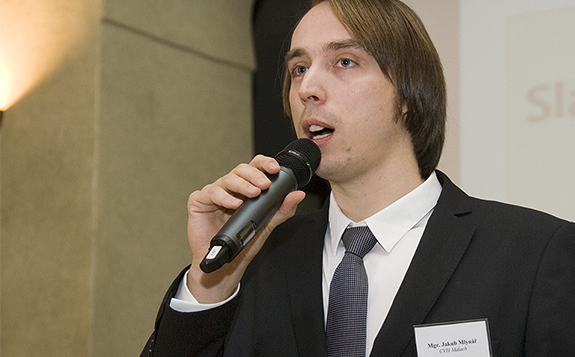 Charles University in Prague is in possession of one of the most valuable databases of oral history in Europe. The Visual History Archive (VHA), created through the University of Southern California (USC) by the Shoah Visual History Foundation, is a rich tapestry of primary research: witnesses, stories, testimonies, confessions of genocide survivors.

The Shoah Foundation was founded by Steven Spielberg, director of Schindler’s List, in 1994. His finances and filming equipment gave momentum to something incredible. With the intentions of filming and consolidating the stories of genocide survivors in video format, 52,000 interviews were conducted and recorded of initially Holocaust and later, Rwandan genocide survivors. The end result was astonishing: capturing 32 languages, touching on the conflict pasts and lives of 56 countries and still growing. The Shoah Foundation, a non-profit organisation, was born, bringing together the accounts of survivors from all walks of life including Jews, Jehovah’s Witnesses, homosexuals, Roma and Sinti survivors, ex-political prisoners, camp liberators, doctors, aid givers and eye witnesses of Nazi rule, trials and camps. Later, this was agreed to be preserved and pioneered by the USC, explaining the link between the two. This now includes Charles University in Prague, who host the VHA at the Malach Centre of Visual History, in the beautiful Faculty of Mathematics and Physics building at Malostranské Square. The VHA’s occupation here lives up to the digitilised nature of the archive, as you can watch the testimonies on speedy computers with headsets.

Our university has established various co-operations with USC through the VHA including a database of electronic information licensing agreement, giving Charles University the literal ability to share this valuable resource with all students and lecturers. The partnership has also introduced our university’s exciting participation in the annual “Teaching with Testimony in the 21st Century“ seminar, which has taken place in the Malach Centre in both 2012 and 2013, with an audience of thirty Czech teachers, four Slovak and sixteen Ukrainian. Jakub Mlynář, the VHA’s co-ordinator, briefed me on the interesting collaboration of Charles University and the University of Southern California: “On a scientific level, there is a quite a long tradition of co-operation between CU and USC, starting over 10 years ago with the project MALACH - Multilingual Access to Large Spoken Archives. Note the Malach Center was created after this project was finished. There is also an actual follow-up project AMALACH: ASR and MT-based Access to a Large Archive of Cultural Heritage; ASR meaning Automatic Speech Recognition, MT meaning Machine Translation. This project is being solved in partnership of CU and the University of West Bohemia, and is supported by the Czech Ministry of Culture”.

It was clear to me after talking with him and visiting the Centre that the VHA can only strengthen our international and educational ties, an objective which as an iForum writer, I have noted to be key to the university’s philosophy.

The Shoah Foundation’s mission may be obvious, but is more than meets the eye. One intention was the desperate need for the voices of the Holocaust to speak up years after 1945 and to tell the world their stories. I myself spent substantial time exploring the archive, which can be accessed at the computer facilities of the Malach Centre and can be utilised by all Charles University students upon request. A reoccurring comment in the many interviews that I watched was the survivor’s necessity for time, reflection and healing, consequentially meaning that their tales have not reached our ears until decades after the Holocaust. Now we are ready to hear them, and we are lucky enough that someone stood up to finance and manage such a task. I urge all students to make use of such a compellingly educational and eye-opening facility at our university.

The interview style of Spielberg has molded every testimony to be conducted in a simultaneous structure and methodology, making them incredibly accessible and understandable – the survivor shares their story in a chronological way but is asked provoking questions to jog their memory or dig further into detail by the interviewer, who I noted was appropriately behind the camera and invisible to the viewer, channeling all focus onto the interviewee. In an electronic age, the VHA’s technological platform is also advantageous, permitting global accessibility to all levels of learners: researchers, teachers, students and non-students alike. This is my favourite characteristic of the archive: it depicts how alive history is, by removing the facts and the statistics and the textbooks and presenting a dynamic, raw historical experience. Obviously oral history has its accuracy flaws, but only in this manner will we come across important micro-history that conveys aspects of “everyday life” that modern history lacks.

According to the Charles University VHA’s coordinator, Jakub Mlynář, the most useful feature of the archive is its narrowed search tools, which will be explained to you upon visiting the Malach Centre (so if you’re a techno-phobe like me, don’t be scared) and allow the researcher to filter thousands of testimonies against 60,000 keywords including language, country and religion to name a few, which can be further refined to incredible detail, such as religious denomination (Orthodox or Reformed Jewish for example). Typing in any tag word you wish like “Auschwitz”, “Anti-Semitism” or ‘Prague” for instance will present people and testimonies that relate exactly to the inquiry. Following my trip with Charles University to the Terezín ghetto and concentration camp, I simply typed “Theresienstadt” into the VHA search engine and came across an array of fascinating interviews of prisoners and occupants of the ghetto. I watched hours of the intimate and moving footage, where I gained a greater emotive and humanistic insight in to the life and horrors of Terezín – everyday details like the names of inmates, their jobs, birthplace, pastimes, the clothes they wore, what they ate, who they talked to, what they saw.

I also spent time researching women of the Holocaust, as I believe that classroom history is male-bias, and we are exposed to little-if any of the distinctly different experiences of women during our educational path to understanding genocide. In this respect, the VHA takes a step further than institutional teaching as it uncovers real female victims and their first-hand opinions of life as a woman in periods of severe conflict and oppression: as mothers, sisters, survivors of sexual assault and abuse, discrimination and systematic rape. For the first time, I was exposed to the shocking conditions of life under the devaluing Nazi ideology of women, which my education so far had refused to address. The VHA succeeds in my opinion, to spread worldwide awareness of such topics and in celebrating the bravery and vocality of the survivors.

The flexibility of the VHA serves the interdisciplinary conception of the Malach Centre and of Charles University, which is why, Jakub commented, our university is a suitable facilitator for such a resource: “VHA as data resource serves a great variety of disciplines and research fields, from history and social sciences to linguistics, psychology or law… even connecting it with the "hard sciences" like applied linguistics and computer science“.

The supervisor also believes that the VHA has aided the relationship between facilities at the university, which can give rise to new projects and opportunities: “For the largest university in Czech Republic, I see the cooperation across different faculties and disciplines as something very important and beneficial. Using VHA is not necessarily limited to Jewish history or Holocaust studies, which is another reason for making this archive available to the students and educators”. So, it would be fair to say that the Visual History Archive has thus far integrated the university not only with others, but strengthened it internally.

Genocide and war studies are controversial and sensitive topics to discuss and research. There are ethical objections the film industry, politicians and society need to undertake when implementing these areas in to commercial modes such as novels, films, documentaries and tourism as we need to be aware of trivilisation and inaccuracy. Jakub gave me a wonderful response as to why the VHA is different and necessary: “In my opinion, there are two main reasons why archives of eye-witness and survivor accounts are valuable. First, genocides are – unfortunately – a non-negligible aspect of modern history, and human memory, or oral history, is quite often the only resource available. Secondly, if we understand genocides as something that should have no place in human society, it is essential to understand the mechanisms of genocide: its precursors, indicators, causes and different stages, to identify ‘pre-genocidal’ discourses and agency in contemporary social phenomena.” I couldn’t have phrased it better.

I highly recommend a visit to the Malach Centre, whether it’s for keen, in-depth assignments or just out of curiosity. We are privileged as students in Prague (not just for the cheap beer, students!) for such abundant resources at our fingertips. By utilising the VHA, you will be accessing an exclusive database of Charles University that you will not otherwise find on the internet or in the majority of educational institutions. Such compact, primary, unique research is a treasure to our university and behind-the-scenes efforts have allowed us to enjoy such contemporary and stimulating education. Besides this, the VHA has a message: we must remember, we must learn and we must educate.