The Charles University Workshop Production company (also known as Shakespeare Production) performed a succession of Shakespeare’s The Tempest on November 24th-December 3rd in which I attended the first performance at the beautiful Divadlo Na Prádle theatre, their current home stage. 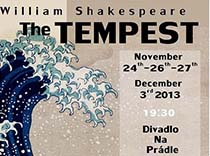 The company, facilitated by the Department of English and American Studies at the Faculty of Arts, has been going strong since 1993 and has ten successful Shakespeare plays under their belt including Twelfth Night (2000) and Much Ado About Nothing (2001). They’ve conquered a variety of stages across Prague, breaking out first on the Salesiánské Theatre where they performed A Midsummer Night’s Dream (1996) before moving onto Řetízek and NoD Roxy Theatres and now, Divadlo Na Prádle, a quirky theatre tucked away in the side streets off Most Legií (Legie bridge).

The company’s productions have all been directed by John Martlew (MA), but are communally created, costumed, organised and designed by all of its proactive members, who evidently from their track record of performances, rise to all challenges they set themselves – from the lengthy monologues of middle and early modern English to mastering creative, dark pieces like Measure for Measure (2009).

The actors and actresses in The Tempest were unique, individually talented and well selected for their roles, creating robust, memorable characters that complimented each other greatly.

Amongst my favourite performers was Ariel, the spirit servant of Prospero (a duke who was casted to a remote island by his brother Antonio with his daughter, Miranda), who was an energetic actor with instantaneous stage presence and a wacky persona that eased him well into an enchanting character with multiple personalities. Caliban the monster (another of Prospero’s slaves) was exceptional in his adaption and interpretation of the role – he was talented with his utilisation of the stage space and a naturally limitless actor, fully embracing his role as a savage. As the play went on, he built up a mysterious and unpredictable figuration in the story, and maintained a close relationship and strong reactions within the audience. Trinculo and Stephano, a jester and an alcoholic butler, were witty, instantly lovable and the source of all the laughs in the audience, naturally lifting the atmosphere. The shipwrecked sailors were equally bold actors that despite their cooperative performance, succeeded at dramatically setting themselves apart from each other by their self-awareness of body language, well-directed proximities and timings, and effortless vocal and dynamistic abilities. The dialogue bounced off each another and their movement was thoroughly rehearsed and conscientious, especially the character Gonzalo, a wise old man, who was convincing, imaginative and charming. The prince Ferdinand lived up to our highest expectations of a smooth, “tall dark and handsome” romantic and he was classic in his performance (I’m sure there may have been a few swoons in the audience).

The theatre and the stage itself were small, minimalistic and self-complimentary, shifting observer focus purely to the action on stage, axiomatically creating good acoustics and endorsing no-frills, organic drama. The stage was additionally low and close to the audience, giving effective direct address and an intimate aura in the room.

The audience was blown away by the evident intelligence and dedication of the company, particularly Prospero, to learn scrupulously tongue-twisting, lengthy lines of Shakespearian English that not even native speakers can usually conquer. The many hours they assigned to The Tempest were palpable regarding their literacy knowledge and study of Shakespeare as well as their practical performance. I admired the notable spirit of teamwork and community amongst the company, which I think is the charming essence of amateur and student-led work. They were an incredibly supportive and tight-knit group, and during bows they paid tribute to each other and their director Martlew with some flowers.

The Divadlo Na Prádle venue was a fitting theatre for creative, unprocessed performances like The Tempest and I recommend it to all those interested in an inexpensive local, student-ran or contemporary alternative to theatre (it also has a funky bar/restaurant if you need another reason to visit). I’m certain it won’t be long until you can catch Charles University Workshop there again, and in the meantime you can follow them on Facebook and keep an eye out for ticket sales in the Faculty of Arts.