The traditional autumn concert of the Faculty of Mathematics and Physics on Thursday, 24th October 2013, was a special event this year. After the official inauguration concert on preceeding Monday, which was attended by invited guests only, it was the very first time when many of the faculty employees, students and friends had the first opportunity to admire the new Petrof Concert Piano acquired by the Faculty of Mathematics and Physics for the Aula of the Informatics building in Malostranské náměstí, so called Professed House (Profesní dům). The Aula serves Charles University not only as a concert hall but, more importantly, as the place of graduation ceremonies for students of the Bachelor degree. 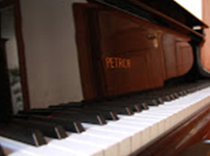 Upon attending this prestigious event, I was left to ponder with several ideas. To the delight of the faculty, they have achieved their goal, and this night, we gathered in the Galerie of the Profesní dům to indulge ourselves to the sound of this unique Petrof Concert Piano. The Project “Adopt Your Hertz” was successfully completed thanks to generous donations of the Alumni.

Once seated in the auditorium, you are left speechless as you look through every corner and crevice of the hall admiring the ambiance created by the most beautiful paintings that cover the ceiling above and walls around you. The new piano perfectly completes the impression of the historical hall. An evening of Violin and Piano was dedicated to music by various well-known Czech composers (Smetana, Janáček, Martinů), with one exception, Jan Novák’s piece for violin, a significant composition of the late 20th century, which is sadly not often on concert programmes. As I sat listening to this wonderful violinist (František Novotný) and his accompanist (Vladimír Hollý) performing on the newly acquired piano, there was one thought running through my mind.

The whole celebration of the arts by Czech people impresses me. The appreciation and dedication of culture by Czechs should be an example to other nations. It pleases me to think how Czech people wish to enjoy music of all ages by all ages. In my home country, Ireland, there is a minority of true music connoisseurs. Most people in Ireland would rather listen to mainstream popular music than a classical symphony as there is no real passion for musical understanding, well not nearly as much as the Czech Republic.

I had brought my British Erasmus friend to enjoy this event with me, and afterwards as we were speaking about the culture of the Czech people and the level of their appreciation, we agreed on this for both our countries.

After the concert, I went roaming around the Hall speaking with some of the patrons for the piano and their pride and excitement for this new instrument was truly evident. There is hope to hold concerts here as often as possible. I wish this new instrument every success for future performances.