Human liver computer model is being tested in Pilsen. It will help to plan better operations.

The interuniversity team of MUDr. Václav Liška, Ph. D., has been testing a software model of the liver tissue at the Faculty of Medicine in Pilsen which is able to compute the possibilities of the regeneration of an organ after  large surgery. It should  help mainly oncology patients soon. 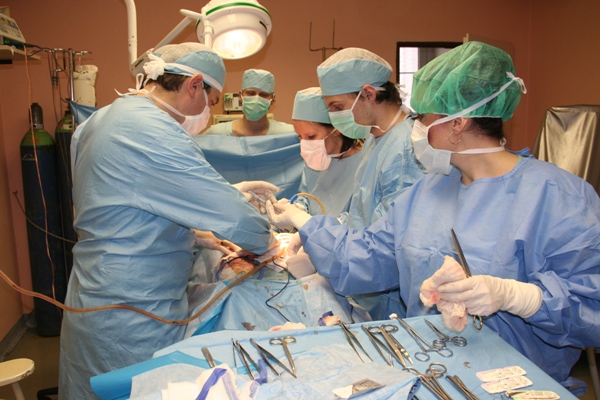 Software modelling will facilitate the planning of surgeries of both malignant and benign lesion  processes in the liver. In them metastases of colocteral carcinoma, which is the most frequent oncologic disease in the Czech Republic, occur. Czechs suffer from this tumour the most in Europe.

“After being operated on colocteral carcinoma, the metastases thereof in the liver occur in 40 to 60% of the patients within 5 years”counts Václav Liška, a young scientist from the Faculty of Medicine in Pilsen. The liver tissue model on which he has been working, together with specialists from the Faculty of Applied Sciences at the University of West Bohemia, could really help a lot of people.

Only about one tenth of patients wait to see the operation of liver metastases; with other patients the physicians prefer to refrain from the operation. “The rest of the patients undergo only oncologic treatment the results of which are, however, far from being satisfactory” Liška says. In addition, it is virtually impossible to really cure the patients and thus  remove all the leisons without leaving remnants of the tumour process”,  adds the scientist and surgeon from the Faculty Hospital in Pilsen whose research has been sponsored by a European grant - Experimental surgery – new trends in Biomechanics (registration number CZ1.07/2.2.00/15.0049) .

“For instance, in a patient with liver cirrhosis it is not possible to perform liver parenchyma resection in the same extent as in a patient with healthy parenchyma in which there is ‘only’ a tumour but its function has not been affected” explains Václav Liška and is one of the reasons why the liver software model will be so useful.

The results of the team of Václav Liška will  make the planning of extensive resection performances more accurate in patients where there is the threat of emergency liver failure and even the death of the patient  which, due to this, the performance is often refrained from.

“The team of the Faculty of Applied Sciences at the Pilsen University extracts for us liver vascular tree out of patient data collected at the computed tomography or duplex ultrasonography”, the resolver of the European grant, whose team has over  25 specialists, describes the process of research. “We apply several types of blood flow models on it through the liver parenchyma. Our goal is to characterize, based not only on these models, the division into particular and to a certain extent autonomous liver subunits which are important at the planning of surgical resections. We also try to estimate the possibilities of regenerative potential of liver parenchyma”.

Using the model in clinical practice requires long clinical testing. “Currently we stem from the data of individual patients obtained at the imaging methods and we try to correlate them with reality, thus we check whether the software model result corresponds with reality”, Liška describes the researchwhich he believes other faculties of medicine might also profit as, for example, the Faculty of Mathematics and Physics. In the meantime, the experiences with scientific work are gained  mostly by pre gradual and post gradual students from the Faculty of Medicine in Pilsen and the University of West Bohemia who, according to the researcher, have done a decisive part of work on the project.

Liška, however, does not only include his students into his project. Besides mathematicians from the University of West Bohemia and specialists from the Clinic of Imaging Methods at the University Hospital in Pilsen, scientists from the Department of Histology and Embryology and the Department of Anatomy at the Faculty of Medicine in Pilsen also work on the research now. “Last but not the least, also colleagues from surgery clinic liver group,  lead by the professor  Vladislav Třeška, help in the research as well” Doctor Liška describes the extensive cooperation.

As he says, the problem is very complex and new questions appear virtually every month. Recently the team has been solving the issue of 3D reconstruction of the liver´s capillary system which is crucial for the subsequent work.

“Currently, we have been getting to know the liver mainly from histological sections, which are, however, only two-dimensional. It is difficult to connect it so that everything corresponds with reality”, concludes Václav Liška, who similarly to most physicians-researchers has devoted himself to the clinical practice.  The day begins in the home Pilsen Faculty Hospital by ward  at the Surgery Clinic B Department. His evenings and weekends are devoted to the experiments and to scientific work.