Looking at Europe from the Orient

On October 31, the Faculty of Arts at Charles University in Prague hosted a lecture by Italian historian Carlo Ginzburg, Professor Emeritus at the Scuola Normale Superiore of Pisa. Professor Ginzburg's lecture, entitled 'Looking at Europe from the Orient,' opened the TEEMA Conference, which ran from October 31 to November 2 at Charles University in Prague. TEEMA (Text and Events in Early Modern Europe) is an international doctoral program, funded by the European Union, which launched in 2011. Professor Ginsburg's speech was preceded by the presentation of the new Czech translation of his book 'History, Rhetoric, and Proof,' first published in 1999. 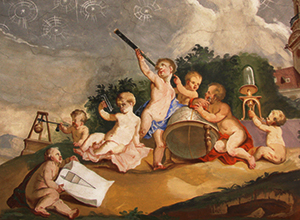 Professor Ginzburg is notable for his contributions to the field of microhistory, a method of historical study he helped to develop in the 1970s, which looks primarily at the ordinary lives of small groups or individuals in society. His best known work is 'Il formaggio e i vermi' (1976, published in English in 1980 as 'The Cheese and the Worms: The Cosmos of a Sixteenth Century Miller'), an examination of the life of an Italian miller, Menocchio, who was persecuted as a heretic during the Inquisition.

Microhistorians frequently focus their studies on anomalous or unusual cases, and during his lecture, Professor Ginzburg explained his interest in anomalous cases. He describing them as richer from a cognitive perspective, because they both contain and defy the norms of period: because their differences, he argued, studies of anomalies can help to shed greater light on the past. His current research, which he presented in his talk, also examines an anomalous case: the works of a little-known French officer serving in India, Monsieur de la Créquinier. In 1704, la Créquinier published a work examining the agreements between the customs of the Jews and the Indians. La Créquinier's work is unusual because it marks all differences between the Jews and the Indians as irrelevant, and labels both groups as 'Oriental' peoples, in contrast to the enlightened and civilised Europeans.

Professor Ginzburg talked about how this originally unusual case study can highlight and give greater substance to a wider generalisation about the European intellectual atmosphere during the Age of the Enlightenment, notably the ambivalence of educated Europeans towards their own society. While la Créquinier is abnormal in his elision of the distinctions between the Jewish and the Indian peoples, his work is more typical of its era in the way it presents these supposedly 'Oriental' groups as being primitive and simplistic in contrast to the advanced societies of Europe. This primitivism, however, is not necessarily a negative: la Créquinier's book as well as his other works, according to Professor Ginzburg, contain a sense of nostalgia for a closeness to nature lost by the development of the European world, and retained only in the static society of the Orient; a sense of nostalgia frequently found in European works from a similar period.

The lecture was followed by a question and answer session, during which Professor Ginzburg elaborated more on the importance and benefits of microhistorical studies. He argued that combining the generalisations created by macrohistory with specifics uncovered by microhistorical case studies is useful in creating a more nuanced picture of the past, and provides a promising way forward for future historical research. He also passionately advocated the use of anomalous case studies in research at a micro-level, describing this practice of "experiment" as crucial for the microhistorian.

Professor Ginzburg's speech was eloquent, entertaining, and duly well-received. It provided a fascinating insight not only into his current research, but into the mindset and methodology of a pioneering and well-regarded academic. While Professor Ginzburg only presented a few tentative conclusions in his talk, it will be interesting to see how he develops his new research, and what further contributions he will make to the field of microhistory.