Professor Luďa Klusáková worked at the Faculty of Arts at Charles University, for more than 40 years. She contributed in no small part to the founding of the Institute of Global History and its scientific and pedagogical success; she also helped enormously in building strong international ties. 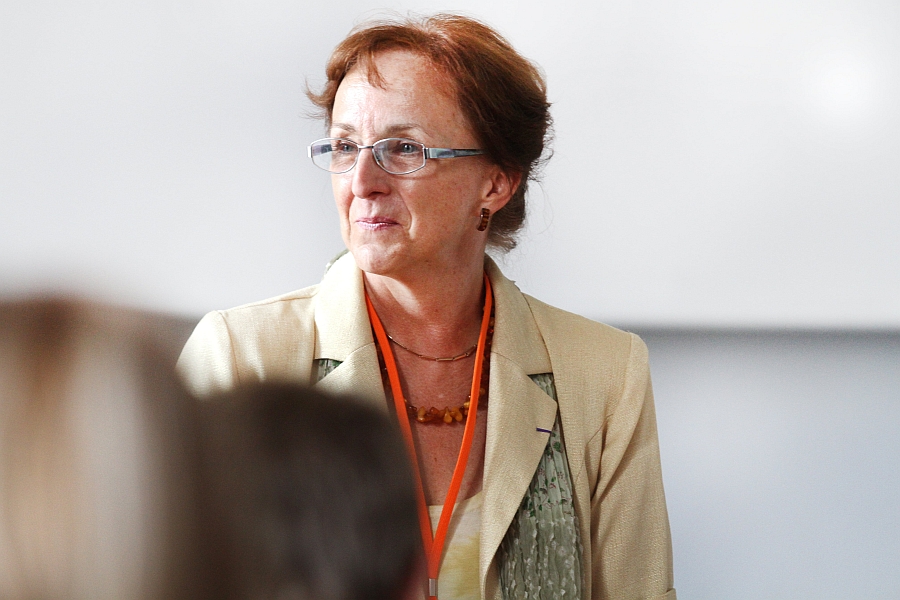 Many colleagues, historians as well as students expressed their sadness upon hearing the news on 8 April 2020 but also gratitude and highest respect. We have taken the opportunity to re-publish some of the responses here but be sure to visit the Faculty of Arts directly for the full article or to read her obituary. Luďa Klusáková is sorely missed.

Michal Pullman, Dean of the Faculty of Arts at Charles University

Along with her exceptional overview of European cultural history, her tireless organisational contributions within the European framework and her overall gracious approach, I had great respect for another of Luďa’s qualities: the conviction to be herself. She wasn’t one to worry whether she held the “right” opinions or belonged to the “right” groups, or used the “right” language. She was an immense personality and she will be missed very much by us all.

For me, Luďa was the paragon of an eminent scholar with a large European horizon, committed to international cooperation in historical research, and, above all, dedicated to university education. I first met Luďa at the beginning of the preparation of the TEMA European Territories: Identity and Development Erasmus Mundus Joint Master Degree programme in 2007. She represented Charles University in the consortium with Eötvös Loránd University of Budapest, University of Catania and the École des Hautes en Sciences Sociales, Paris. Education in the TEMA European Master Course started in 2010 and is still running under the name TEMA+. This unparalleled and successful international project simply could not have worked without Luďa’s exceptional organization skills and commitment.

Over the past few years, I have witnessed the organization of series of international research programmes and conferences by her with seemingly inexhaustible energies from which I, along with many, have benefited myself, and for which I am grateful to her. She was exemplary in her dedication of promoting the comparative and interdisciplinary approach of urban history. I was deeply impressed by her level of knowledge and understanding of the past and contemporary problems of the Central European region, and it was a joy to discuss them with her in Prague, in Budapest and elsewhere over a coffee or dinner.

For nearly ten years, we taught the TEMA program students from all around the world together, and I could see how she related to teaching. For me, this was the most intense impression she made on me: the generosity and special attention with which she turned to each of her students. She deeply cared for their future, the development of their studies, their careers, and this was more important for her than anything else.

It is very painful that she passed away, but Luďa was a personality whose memory will live on among friends, colleagues, and disciples.

I have lost a good friend and Tampere University an excellent scholar and teacher.

In 2016, Luďa wrote in our guestbook that her visit to Helsinki in 2016 was her sixth visit to Finland. We met for the first time at the first meeting of European Association of Urban Historians (EAUH) in 1992 in Amsterdam and the visit to Helsinki was connected to the conference of EAUH in Helsinki. Luďa Klusáková developed her research activities in an international context, and we can be thankful for Czech contacts to Professor Miroslav Hroch, whom my professor Aira Kemiläinen invited to Finland at the end of 1970s. What they had in common was nationalism and comparative history.

In December 1994, Professor Miroslav Hroch invited me to participate in a round table discussion on Unequal Development. This was my first visit to Prague. On my first day in Prague, I heard that I had been invited to an Independence Day celebration hosted by President Martti Ahtisaari. I needed a long evening dress. My husband’s tailcoat was waiting at home. Luďa kindly accompanied me to the shops and I was proud to wear a Czech evening dress to the President’s party.

Professor Luďa Klusáková continued with the cooperation between Finland and Czech Republic and those research fields on nationalism. Her research interests also focused on the area of comparative European urban history. She was interested in the modernisation of European cities, in problems of innovation as an aspect of the modernisation and the process of perception and interpretation of the changes in towns. In a broad context, she has been interested in the issue of cultural identities and perceptions of various “othernesses”.

We all have enjoyed on Luďa’s extensive networks and bilateral contacts which covered the major regions of Europe, from Prague to Tampere, Finland, and from Prague to Paris and Newcastle. We have admired her effective coordination skills as she coordinated several research groups and exchange programs like ERASMUS/SOCRATES, and research groups like, TEMA, CLIOHRES.net and Tensions of Europe. These offered possibilities for scholars and students to participate in seminars and workshops as well as to study in Prague. The ERASMUS network consisted also of exchanges of teachers. Many of us had the privilege to lecture at Charles University and we will never forget the stunning views of the Castle.

Luďa gave several lectures at the University of Tampere. Our students remember her lectures in 2003 on “The Road to Constantinople. The Sixteenth-Century Ottoman Towns through Christian Eyes” based on her Habilitationschrift. Her starting point was to look at how a traveller, “a person from a Christian Western or Northern World perceived a society organised on an entirely different principles to his own society”. We also had several common sessions at conferences. I want to particularly mention her presentation on the XXI. Amsterdam Conference of International Committee of Historical Sciences (ICHS)/Comité international des Sciences Historiques (CISH). Luďa gave a presentation in my session The City as Culture/La ville, produit culturel in 2010.

Owing to her wide competence in the fields of history, she inspired our students and got them interested in comparative research. In Prague, she held a regular research seminar for PhD students which she also opened to MA and post-doctoral students. Since the 2000s, my students participated in this seminar as well. Luďa’s interest in innovative communities (her presentation at the XIV. Economic History Conference in Helsinki in 2006) was very close to my own interests in innovations.

I would like to mention two concrete cases where Luďa’s knowledge and role have been crucial. Luďa gave helpful guidance to my student Riikka Nisonen-Trnka (Palonkorpi) for her dissertation on “Science with a Human Face: the Activity of the Czechoslovak Scientists Frantisek Sorm and Otto Wichterle during the Cold War” (2012, in Czech 2017). Luďa was also asked to be the opponent for Tanja Vahtikari’s doctoral dissertation “Valuing World Heritage Cities” at Tampere University. The book was published by Routledge in 2017.

During the EAUH conference in Helsinki in 2016, we made a weekend trip with Luďa to our summerhouse which is on an island in Vesanto, in Central Finland, 400 kilometres from Helsinki. This made her last visit to Finland memorable. The summer 2016 was full of sun and berries. We picked lingonberries, ate fresh fish from the lake, went to sauna, swam in the lake, and had many interesting conversations on small towns, peripheral regions and backwardness. I met Luďa last time in March 2019 when I lectured at her TEMA seminar. I had a wonderful time in Prague with her. In 2019, she was elected the External Member of the Finnish Academy of Science and Letters.

The first thing that struck me about Luďa was her ferocious intelligence. She seemed to take no prisoners intellectually and she must have appeared daunting to many. But she was also an exceptionally kind and gentle person in her relations with younger scholars and doctoral students, who she attracted in significant numbers. A similar duality marked her scholarly work: on the one hand, a committed historian of Czech urban history and heritage, on the other a cosmopolitan Francophile who helped to found the Institute of World History at Charles University. I got a glimpse of a younger Luďa when she took me on a walk around Prague, showing me where she had gone to parties in her youth, mixing with dissident writers and publishers. Luďa was a woman of many parts, a formidable scholar who was admired internationally and who touched everyone who had the great fortune to know her.

Article in Czech at iForum CZ