On Thursday, November 6, the Faculty of Arts of Charles University hosted a lecture by Professor John C. Lennox, Professor of Mathematics and Philosophy of Science in Oxford University, titled “Has Science Buried God?” The vast interest in this topic was clear from the moment I arrived at the venue in the Faculty of Arts main building. With every seat in the Great Lecture Hall filled 10 minutes before it was due to begin and standing space at a premium I was taken aback by the sheer number of people who had ventured out on that dreary night to see Prof Lennox speak. The reason behind the enormous attendance soon became clear as Prof Lennox began his lecture, he truly possessed everything that was needed for a discussion about a topic as complex and controversial as this; a remarkable intellect, a flare for public speaking, a great passion for the topic, and most importantly a willingness to approach the topic with logic and reason, and explain his views and their downfalls openly and honestly.

An interesting distinction made by Prof Lennox was between a “god of the gaps” and his own view of God.

In his opening point he referred to two scientists, Peter Higgs and William Phillips, one Atheist and one Christian, both Nobel Prize winners. What he said about these two was that “what divides them was not their science but their world view”. This is a theme that occurred throughout the talk, that it was not the science that was differing for the most part, but the world view of the people taking part in it. This is very evident in the contrast between Isaac Newton and Stephen Hawking. Newton saw gravity as proof that God exists but Hawking sees it as proof that God doesn’t exist. So what has changed in the time between these two great minds? The easiest answer is the world views with Christianity no longer at the forefront of men in the scientific community, being mostly replaced by atheism. Where once you were thought a fool not to believe in God, it now seems more and more as if you will be thought a fool for believing. 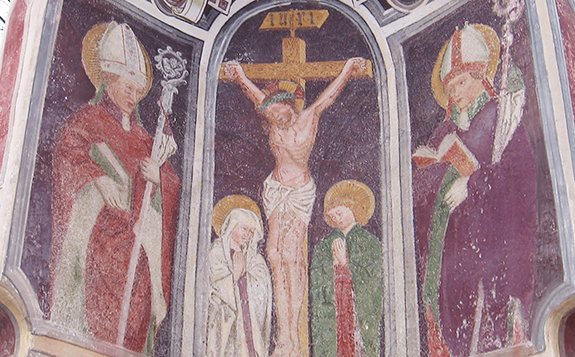 An interesting distinction made by Prof Lennox was between a “god of the gaps” and his own view of God. He stated that if you believe God is a “god of the gaps” then you are forced to choose between religion and science as science explains the things once thought to be the work of a god, such as thunder or rain. This, the view which seems to be held by Hawking, is in contrast to the view held by Newton and Prof Lennox who see God as a God of “the whole show”, therefore the more they learn of the world through science the more they believe in a God who has created it and marvel at his work.

Lennox seemed to feel that many people are confused as to the nature of scientific explanation. For example the law of gravity does not tell you what gravity is, in fact nobody knows what it is, it only tells you what it does. He believes that an explanation through science and one through God do not contradict each other, much like the scientific explanation of boiling a kettle of a heating element causing the water molecules to vibrate extremely fast does not contradict the explanation that it is boiling because I wanted a cup of tea. He appeared to be saying that both are valid explanations which come together to form a fuller picture.

One of his more striking arguments was against one of the most common points made during this type of debate which is if God created everything then who created God. To this he simply said that this presumes God was created, an idea which goes against the Christian faith which says that God is eternal. This is a very difficult concept to grasp and to accept without faith in its truth and a divine power but the opposing side says that at one point everything came from nothing, an equally difficult and terrifying idea. I feel it best to leave the contemplation of these ideas to greater minds than my own, who themselves find it difficult to fully understand or explain.

By the end of the lecture I was perhaps a bit overwhelmed by some of the concepts however I was utterly entranced and I think most importantly I had been made to really think about the topic and my own personal standpoint on it. It is this I feel, making people think, that is the most important outcome of any lecture or debate. As students we should always be questioning both what were are told and what we know or may believe to know and Prof Lennox certainly made me do just that.