On Thursday 2nd November 2017, the Law Faculty building of Charles University played host to a talk given by prestigious Professor of Mathematics at Oxford University John Lennox. The lecture was organised by students of Charles University themselves alongside the Faculty of Arts. The talk was the first in a two part series of lectures focusing on Knowledge and truth, with the second part, ‘Time for Truth: Who can we really trust?’, delivered by Os Guinness on Monday 6th  November. The Collegium Maximum, which hosted the event, was full to capacity; around 200 people of all ages occupied the floor below and over spilled onto the overhanging balconies. Some of the interest in the event may have been influenced by promotion from the Christian societies as well as academic interest from a broad range of disciples – the talk incorporated the Sciences, Philosophy, Theology amongst others so was of great interest to many. 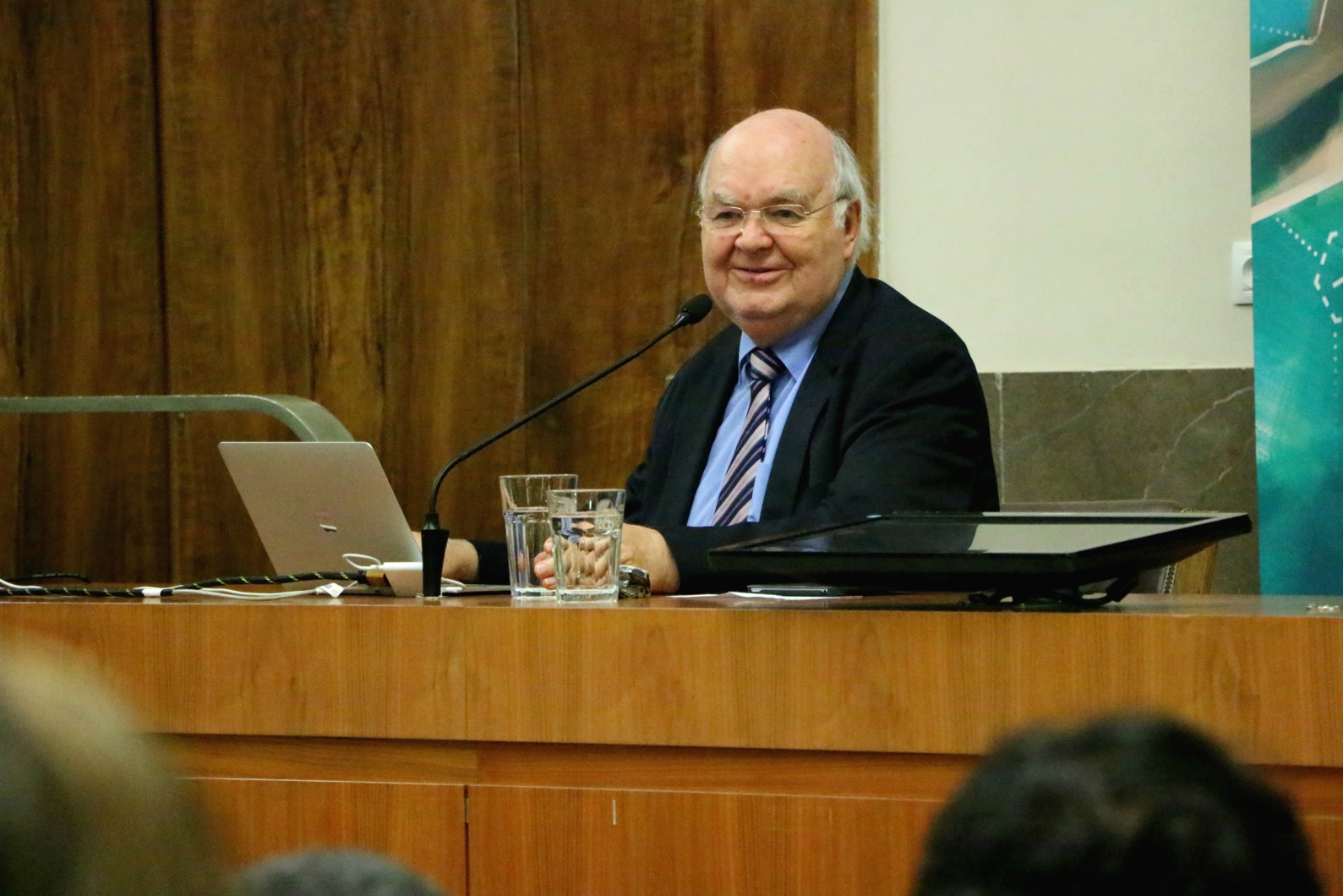 The focus was on the critical evaluation of science as a discipline - and even as a belief system - whilst debating the role of religious faith in scientific study and whether the two can be truly integrated. Lennox’s own belief system as a Protestant Christian heavily informed the contents and argument of the lecture; he has previously debated the likes of Richard Dawkins on Theism vs. Atheism. However, at no point did he appear to preach at the audience as he offered a range of perspectives and worldviews, citing scientists and thinkers from across the religious spectrum.

The circular nature of the lecture aided understanding; it began by detailing the fundamental assumptions of the scientific discipline: a belief that science can be done and that the world around us possesses a rational and mathematical intelligibility. Science is seen as an inherently materialist discipline as it reduces the world to physical terms. There is little room for study of what is immaterial – why we think how we do and the spiritual and emotional importance driving many events.

Lennox illustrated this well using the question of ‘why does a kettle boil?’, the answer from a scientific perspective would link to the chemical properties of water and its response to heat. Though this does not fully answer the question, as the reason the kettle is boiling is because the kettle was turned on because someone wants a cup of tea. It is Lennox’s use of examples such as this that allowed him to hold the rapt attention of the audience throughout the hour, as soon as the talk rose to the scope and complexity ideas fitting for one of his Oxford seminars, an easily accessible conundrum such as this would re-engage those not as versed in philosophical study.

Science, Lennox argues, is limited and not co-extensive with rationality as is widely believed. Hence, in response to some questions and debate it becomes pertinent to look to other disciplines; science alone cannot answer all questions of existence. This is where he brings us to the relation of science to religion; why is it that there is a current presumption that science is the antithesis to religion? Lennox remarks on how many of the most revolutionary scientific ideas in history were born of religious minds – Newton and gravity, Copernicus and heliocentrism and Ernest Walton who helped split the atom. Walton especially expressed how his belief in God inspired him to use his God-given intelligence to understand the world around him. This is a sentiment echoed by Lennox, who suggests that to study science is to honour God by studying the world he created. 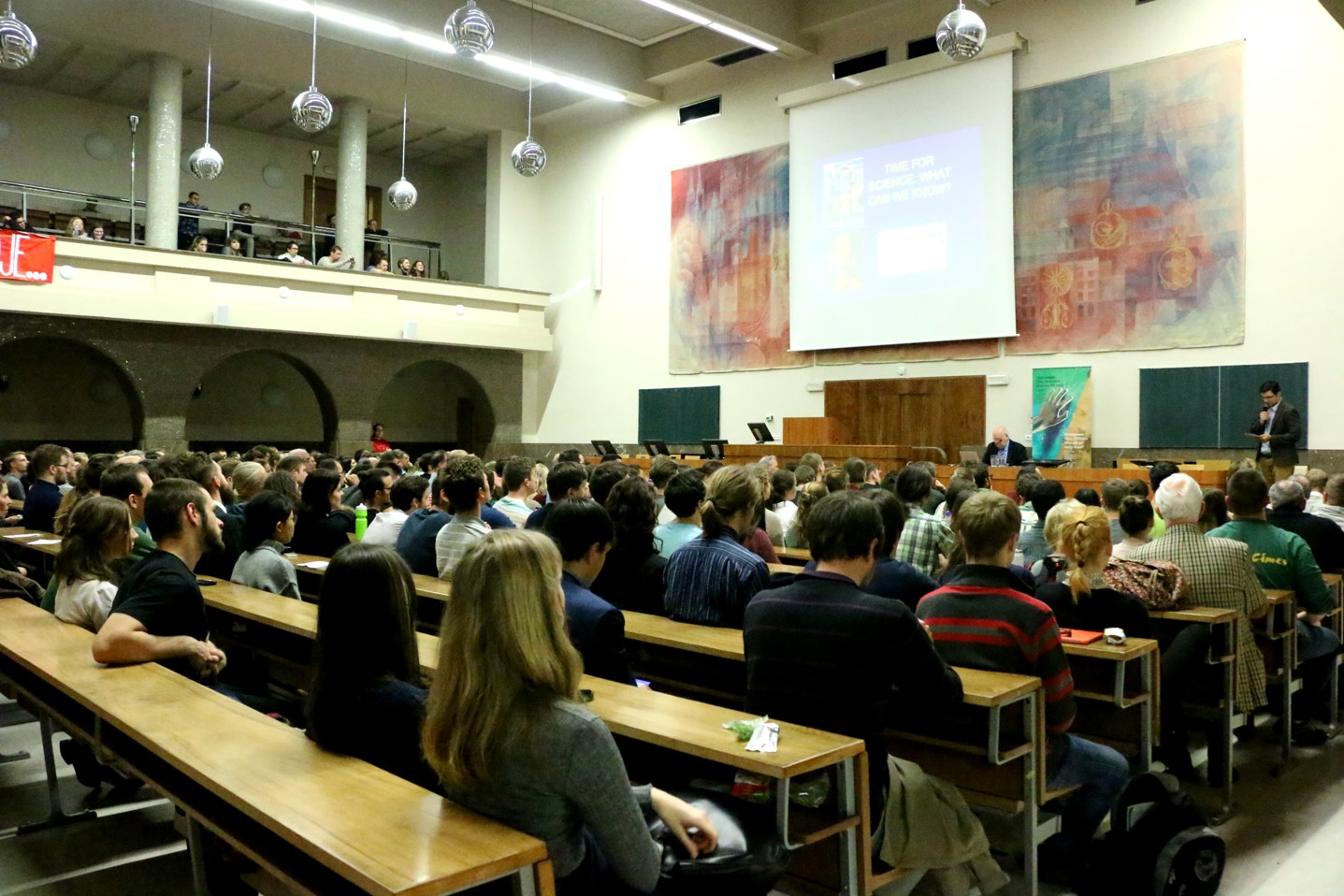 Lennox concludes his talk with the assertion that to believe in Science is to believe in the universe as intelligible – as stated at the lectures beginning, and how can we trust the intelligibility of our minds and the world around us, if these are the results of millions of years of directionless, random reactions and processes? Lennox states that it is in fact Atheism, not Theism, that is incompatible with Science.

The talk’s effectiveness stemmed from how it made one question their own mindset and premediated beliefs. Lennox presented all his arguments in a logical way, slowly building the foundations for his unerring religious belief. He does not attack those whose worldviews oppose his, but graciously explains how all worldviews are the result of complex reason and will follow a logical pattern. It is because of this that I, despite disagreeing with his final argument, never felt alienated by the content.

The Q and A in the final half an hour offered thoughtful meditation on why one has faith and why one must continue to question knowledge. My takeaway from the talk was that comprehensive arguments come from attempting to understand the worldviews of others and contemplating what presupposes your own viewpoints. An anecdote Lennox gave of a student at an American talk illustrates the powerful message some may take from the lecture. The student suddenly stood up and shouted of the profound change that a similar talk given by Lennox, when he had seen it previously, has had in his life, as it convinced him to open his heart to God and find happiness; after attending the talk his life was changed.