The calendar contains the exclusive work of photographer and artist Martin Frouz and uses a mixture of different media to convey the historical importance of vital events. Alongside the imagery are sections of informative text that gives a historical explanation of the events depicted.

Historically, the calendar gives a brief overview of Czechoslovakian history from the roots of the Czech lands to the modern day. The imagery and subsequent information for February is an explicit example of the successful interlinking of Czechoslovakian history with the University. Entitled ‘The 1918 Republic’, February symbolically highlights the prominent connection of the First President of Czechoslovakia, Tomáš Garrigue Masaryk, with Charles University as a former professor. As well as this, the month demonstrates the replacement of previous traditions associated with the Austro-Hungarian Empire through the staged photograph of dignitary’s robes. These robes signify the shift from the old Austro-Hungarian way of rule, to the creation of new traditions being formed in Czechoslovakia that would continue throughout the 20th and 21st century.

Another image that conveys the interconnectivity of Czechoslovakia and Charles University is for the month of April. April demonstrates how the development in the political sphere of Czechoslovakia affected the everyday operation of the University in the period of the Second World War. The month uses layered imagery to highlight the interrelated issues the country dealt with. The over-linking pictures convey how the student-led protest to 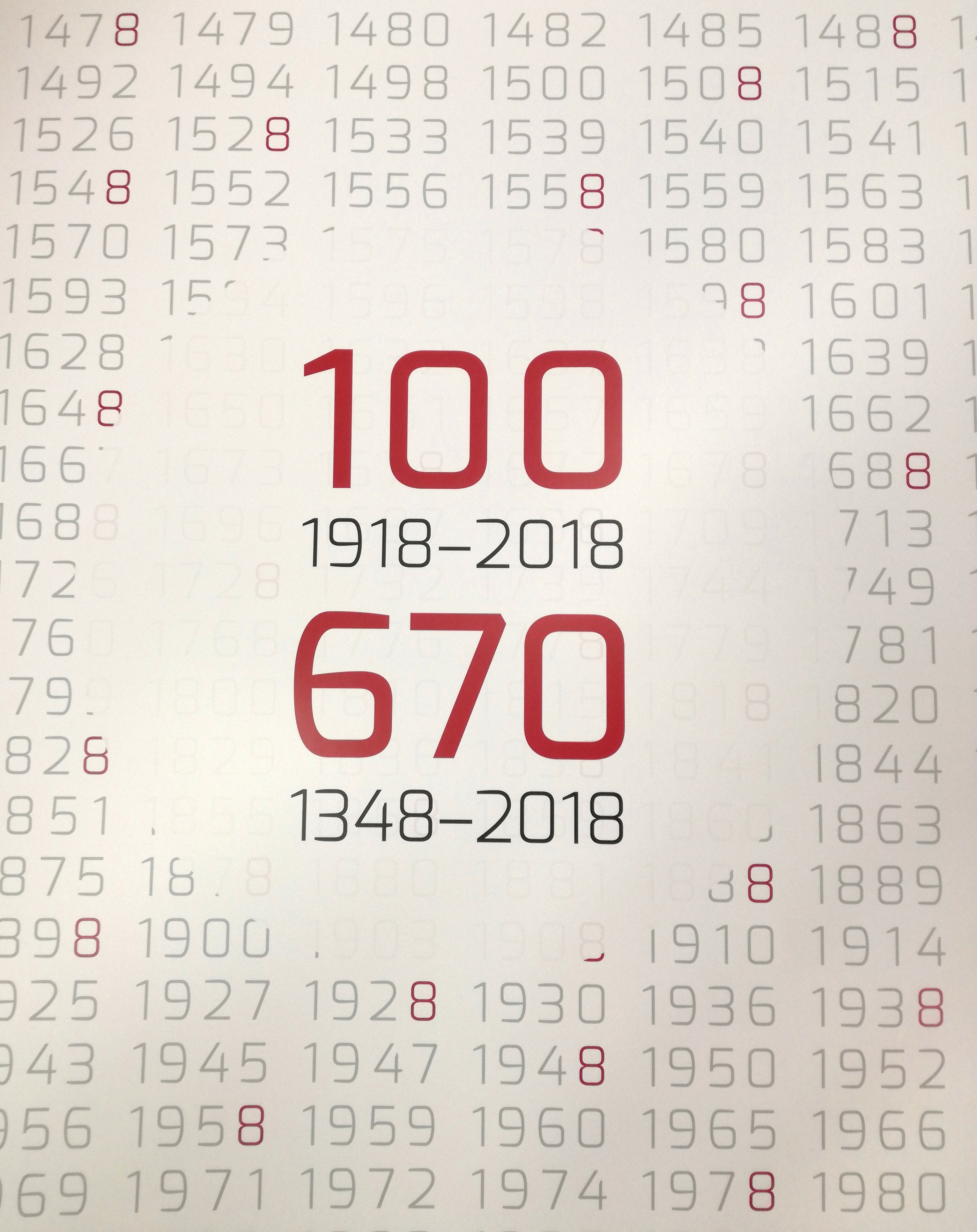 Nazi-Occupation of Czechoslovakia resulted in the closure of all the country’s Czech teaching Universities. This was catalysed by the death of student protester Jan Opletal.

July focuses on the Prague Spring of 1968, with a backdrop of clippings from newspapers and magazines collaged together. The clippings cover the period of 1965 to 1969 and demonstrate the impact of the invasion of Czechoslovakia by Warsaw Pact armies in August 1968. The most influential event in this period was the extreme protest of Charles University student Jan Palach, who sacrificed himself by self-immolation as a poignant demonstration against the occupation of the country. Jan Palach’s legacy is highlighted through the memorial plaque, designed by Olbram Zoubek, which is located on the outside of Charles University Faculty of Arts building.

The imagery used for October establishes the actions of protesters in the Velvet Revolution and subsequent fall of Communism in the Czech Republic. By using the flag of Czechoslovakia, black and white photographs from the period and candles, the visual content is a presentation of the peaceful origins of the Velvet Revolution. The events of 17th November 1989 were held in commemoration of the violent suppression of the 1939 student protests against Nazi Occupation. This is demonstrated by the invitation by independent student group ‘Ribbon’, stating: ‘Take a flower or candle with you… we want to actively acknowledge the ideals of truth and freedom, for which their proponents gave their lives.’

The Centenary year itself is filled with many activities throughout the country to mark the historic occasion. The Czech government plans to spend around 90 million crowns on the events arranged in the coming year. These events do not just cover the Czechoslovakian Centenary of 1918, but also the Prague Spring of 1968, and the split of Czechoslovakia into two independent states in 1993.

Charles University is also contributing to this celebration, not only with the publication of the calendar, but with the exhibition entitled ‘The University and the Republic: 100 Years - 100 Items - 100 Stories’. The exhibition spans the full hundred-year period and shall end in the modern day. Encompassing a hundred exhibits, each embodying a distinct year in the period of 1918-2018.

The exhibition is running from 1 May – 30 September 2018 in Karolinum.